‘Behold, the Lamb of God’: Liturgy of the Eucharist 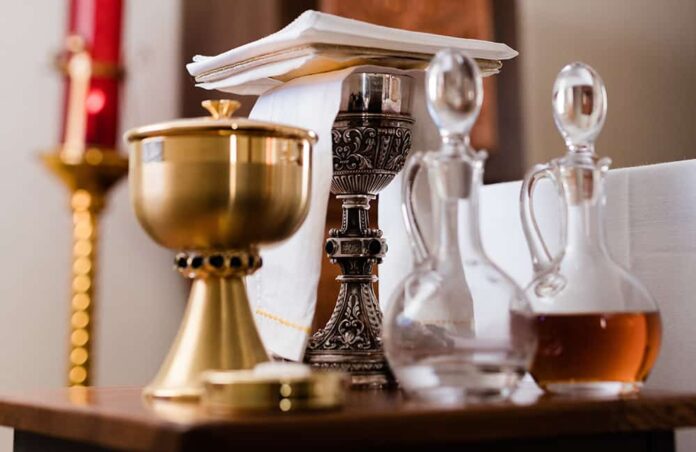 This article is the fourth in a series the Denver Catholic staff created to help the faithful return to Mass in a deeper way than ever before after an extended absence from it due to the coronavirus pandemic. Click the links below to read the other parts.

After hearing God’s word triumphantly proclaimed in the “first table” of the Mass, the Liturgy of the Word, we enter into the “second table” of the Mass, and consequently the high point of the entire Mass, the Liturgy of the Eucharist. This is where the sacrifice of Christ on the cross is once again made present through the Eucharist. Jesus does not physically die each time during Mass, but we are taken to that crucial moment in history, to his death and resurrection. At this moment, acting in the person of Christ, the priest consecrates the bread and wine, and these truly become the Body and Blood of Christ that we later receive in the communion.

Preparation of the gifts

Here begins what is normally called “The Offertory,” in which the bread and wine are carried in procession to the altar. This symbolizes the offer of oneself and of our efforts of the week to God, or, as it is said in the Mass, “Fruit of the earth/fruit of the vine and human work”. At this time, the passing of the collection basket is also carried out, which represents not just giving money to support the parish, but also thanking God for the gifts received.

The priest takes the chalice, pours wine, and then adds a little water. The wine symbolizes the divinity of Christ and the water, his humanity: his two natures that mix without him ceasing to be one person. It also means that we are called to participate in the divine life of Jesus in our humanity by receiving his Body and Blood.

The priest washes his hands to symbolize that something very important is about to happen and also because it represents the purity and cleanliness of heart that a person needs to have to get closer to God, who will soon be present in the Eucharist. This tradition was already present among the Levitical priests and is reflected in Psalm 24:3-4:“Who may ascend the mountain of the Lord? Who may stand in his holy place? The one who has clean hands and a pure heart”.

Prayer over the offerings

Everyone stands up with the priest’s invitation to prayer:

“Pray, brothers and sisters, that my sacrifice and yours may be acceptable to God, the almighty Father.” The priest says “my sacrifice and yours.” In other words, although the priest offers the sacrifice in person of Christ to the Father, the faithful are not mere spectators: they are too called to give themselves completely to the Father with their jobs, works, sacrifices, etc., and thus participate in the sacrifice of Christ on the cross “for our good and all his holy Church.”

This prayer concludes the offertory and leads us to the consecration. It begins with a dialogue between the priest and the people and continues with a special prayer and the “Holy, Holy, Holy”.

“THE LORD BE WITH YOU”

This significant phrase is repeated so that we realize the importance of what is about to happen and so that God gives us grace to understand this mystery.

“LIFT UP YOUR HEARTS”

Around the year 250 A.D., Saint Cyprian commented about these words of the Mass:

“Let all the carnal and human thoughts disappear; at that moment do not let the soul think of anything other than the sole purpose of its prayer”.

“LET US GIVE THANKS TO THE LORD OUR GOD”

“It is right and just.” People reply. Indeed! Because despite our sins and our lack of love, Christ has given himself out of love for us and has remained in the Eucharist for our salvation.

During this acclamation, we become aware of what is happening at Mass. With these words taken from the visions of the prophet Isaiah (Is 6:3) and Saint John (Rev 4:8), we realize that the angels and saints sing this hymn in heaven, and we join them: heaven and earth unite. We also repeat the words that the crowds used to greet Jesus in Jerusalem: “Hosanna!” (Mt 11:9); we are receiving the King who is about to make himself present in the Eucharist.

The congregation kneels when the priest lays his hands over the bread and wine, asking for the outpouring of the Holy Spirit on those gifts, and says a prayer. Then, the priest says the words of consecration: “Take this, all of you, and eat of it, for this is my body, which will be given up for you…” then he does the same with wine.

Mass and the Jewish Passover

But to understand these words we have to see them through the Jewish Passover, a holiday that celebrates the freedom of the People of God from slavery in Egypt (Ex 12). God commanded the Israelites to sacrifice an unblemished lamb, spread its blood on their doorframe to free them from the plague, and eat it, along with unleavened bread. The lamb, the blood and the bread were the main elements.

Jesus, the true “Lamb of God”

The Last Supper (the day in which Christ pronounced the words of consecration that the priest still recites during Mass) took place during the Jewish Passover celebration (Mt 26:19; Mk 14:16; Lk 22:13). But Christ did something unexpected. The Scriptures never mention a lamb at the Last Supper. Instead, Jesus speaks of his own body and his own blood “which will be poured out for you.” Jesus presents himself as the true lamb that is going to be sacrificed! The lamb, the bread and the blood now refer to Jesus: the sacrificed lamb is him, the bread is his body and the wine is his blood. When speaking of his sacrifice, Jesus is speaking of his death on the cross.

Thus the Mass becomes the celebration of the “New Passover”. We realize that the freedom from slavery in Egypt was foreshadow of the true freedom Christ would bring: freedom from sin and death, through his death and resurrection.

That is why Jesus in the Eucharist truly touches our life, our problems, our joys, our sorrows … He has stayed to transform us, to free us from the slavery of sin and give us the true freedom that can only be found in him, to lead us to fulfillment that begins here and completes in heaven.

Besides giving himself to us completely, Christ makes us partakers of his salvation plan. In the Eucharist, the faithful are also called to unite their sufferings, their work, their praise and their prayer to those of Christ as an offering for the salvation of the world (CCC 1368).