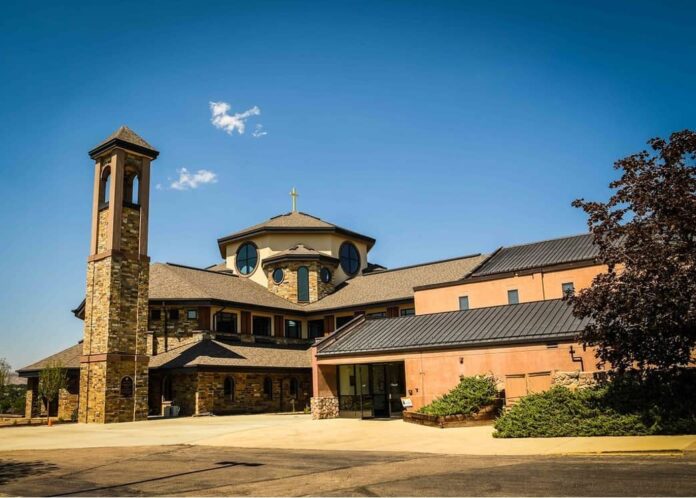 “We need tangible things that help us touch the invisible:” This is what guided Father Joseph Toledo in his vision for constructing a church building especially devoted to the worship of God.

As pastor at St. Elizabeth Ann Seton in Fort Collins (SEAS), Father Toledo undertook the arduous project of building the church that the parish community had been waiting for since its foundation, over 30 years ago. Until then, they had celebrated Mass in a multi-use building also utilized for other parish activities. The long-awaited time came on August 10, when Archbishop Samuel J. Aquila dedicated the new church.

For Father Toledo, building a church in which to worship wasn’t enough – he wanted to make sure it was capable of lifting the hearts of the people to God through its beauty.

“When you walk in, churches are meant to draw your attention to God,” he said. “The building is meant to be a place for encounter with the Lord. And if we have a beautiful building, then the beauty can draw us to God. When we come to the sacraments, we encounter the Lord in an even more real way because that building has helped us to enter into the sacrament.”

And in fact, upon entering new the SEAS Parish building, the eyes immediately focus on the sanctuary, the golden tabernacle, the two angels at its side and the image of the Last Supper on the altar, contrasted by blue mosaics and the marble.

A majestic crucifix hangs from above and is accompanied by depictions in the apse of the Father and the Holy Spirit, as well as saints who were sanctified through their work in the United States.

“Our new church definitely draws your attention to God in a way that our old one didn’t. The old one was filled with wonderful people and a lot of wonderful things happening, but you can’t help but look up and marvel at God’s work when you walk into this new church,” said Kristen Balk, who, with her husband Nate and four children, found a “home” in the welcoming community at SEAS.

But it was precisely the close and welcoming parish community that parishioners Judy and Patrick Fox found when they arrived 10 years ago which led Judy to wonder whether a new parish building was really necessary in the first place.

“As much as the church is very welcoming and warm, I found what I call ‘church’ among the community of parishioners. So, at first when Father Joseph announced that we needed to build a new church, I said, ‘Why? I think the church is fine. We don’t need to have anything fancy to worship,’” Judy said.

She not only realized the need for a new church building after learning about the state of the structure and the costly repairs that had to be made, but also when she was able to walk in the completed church.

“It’s truly a great place where God needs to be worshipped,” she said. “It’s gorgeous, it’s beautiful, it’s something that God deserves. It can bring people closer to him.”

“It was really cool to share with our kids and talk about how this is [a historical moment], and that hopefully for many, many years our family will be able to come back and say, ‘We’ve been here since the beginning,’” Kristen added.

This desire to leave a legacy – a beautiful place of worship – for the future generations of the Fort Collins area was one of the many reasons that led parishioners to give so generously to complete the $8.9 million project.

“This process has had its ups and downs, but in the five years it’s taken to build this church, from the beginning to the end, God has always been present in every step of it,” said Father Toledo, who was amazed by the generosity and desire of the parishioners to build a beautiful place of worship for God and the community.

“This church is not just meant for the SEAS community, but as a gift to the Lord and to the whole archdiocese, because we’re all on a journey toward heaven,” Father Toledo concluded. “And this is a place that I hope people from all over the archdiocese stop by, if they ever find themselves in Fort Collins. That’s why we build churches. We don’t build churches as monuments for ourselves – the church is meant to be used for the mission of bringing people to the Lord.”