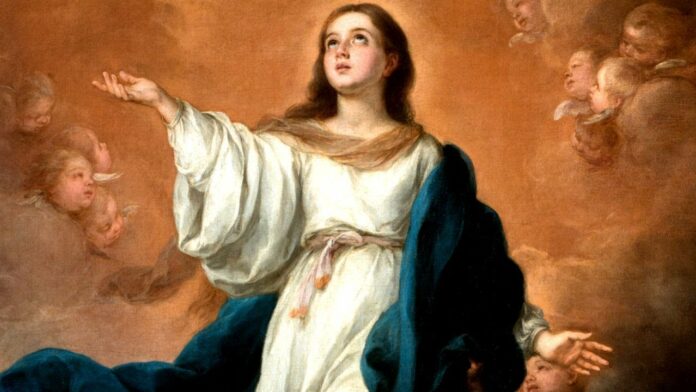 This question may seem difficult to answer, but its answer is actually quite simple: because God willed it.

We may ask why God would want us to have a relationship with his mother – wouldn’t it distract us from him? Doesn’t it seem quite contradictory?

Something similar happens in our relationship with the Virgin Mary. She’s not there to distract us from God, but to lead us to him.

But why do we say that God wanted us to have a relationship with the Virgin Mary? Doesn’t it seem like too much of a stretch?

The Bible gives us the answer. In the Gospel of John, we find Jesus’ last words. They hold a special importance because, as we know, no one would waste their last breath by saying something superfluous. They carry a special meaning, they’re powerful. Jesus knows he doesn’t have much time left but struggles to say them anyway. Among these words we hear Jesus speak directly to his mother: “Woman, behold your son!” and to the beloved disciple: “Behold, your mother!” (Jn 19: 26-27).

What does this mean? Many think that when Jesus calls his mother “woman,” he’s disrespecting or belittling her. But would Jesus really take the time to do that to his mother as he’s dying on the cross? Probably not. A deeper look allows us to see that the title “woman” carries a deeper meaning in the Gospel of John.

Jesus calls his mother “woman” because he’s calling her like the first woman in the Book of Genesis: Eve. John does something similar throughout his Gospel. He begins his Gospel with the same words as the Book of Genesis – “In the beginning” – to highlight that while Genesis tells the story of Creation, his Gospel tells the story of the New Creation brought about by Christ. In this New Creation, Jesus is the New Adam (also see 1 Cor 15: 21-23) and Mary is the New Eve.

So, by calling her “woman,” Jesus is calling Mary the “New Woman,” the spiritual mother of all who are born into the New Creation brought about by Christ. She becomes the mother of every beloved disciple, of every person who follows Jesus. God has given us a great gift – his own mother as our companion.

Our role in God’s plan

But why would God do that? What would we need Mary for?

This has to do with the way God has chosen to act in history, in his plan of redemption. God chose to act through “middlemen” or mediations. If he so wished, he wouldn’t need us to cooperate with him in his plan. He could’ve appeared to the whole world and convinced everyone. Yet, he told his disciples, “Go therefore and make disciples of all nations” (Mt 28: 19). This means that God chose to reach people’s hearts and lives through other people, through mediations.

This proves true even in our own lives. How many of us have embraced the Christian faith because of what our parents or someone important in our life taught us, because of someone’s example or invitation? How many times has God talked to us through others? Every time we use the word “through” we’re talking about a mediation – someone in the middle though whom God speaks to us. God acts through others, he uses mediations.

Another example of mediation is praying for one another. The letter of St. James clearly calls us to do it (Jas 5: 16). When we pray for a brother or sister in Christ, we become the “middleman”, like Moses, who begs God for someone else. There’s nothing wrong with being “mediators” in this way.

But 1 Timothy 2:5 clearly says that Jesus is the only Mediator between God and man.

As we have seen, God does act through mediations, but only Jesus is Mediator with a capital “M,” we could say. That is, only he was capable of uniting man to God, only he could become the bridge that overcame sin and brought us to new life. No one else is mediator in the way Jesus is. We have the “Mediator,” who is Jesus, and “mediators,” us Christians. Jesus wanted us to participate in his mediation, but this doesn’t mean we replace him or compete with him. This mediation is what allows us to invite people to know him. He willed his plan of salvation to be carried out in this way. So, when we say we or Mary are “mediators,” we’re obviously not saying that we’re “Mediators” like Christ. We’re simply saying that he chose to let us partake in his mission by reaching others through us.

When Catholics “pray” to Mary, we’re not praying in the same way as we pray to God. We’re asking for her intercession, the way we ask our brothers and sisters for prayers. That is what we ask from her in the Hail Mary.

Here is where the Virgin Mary comes in. She takes a special place among us, who participate in Jesus’ mediation, because God chose to come to us through her and gave her to us as Mother. Her mission consists in always leading us to him: “Do whatever he tells you” (Jn 2:5). She, like us, mediates under Christ’s mediation. When we say she intercedes for us, we are not saying we forget about God. It simply means we turn to her for prayers, something all Christians do when they ask for prayers from their brothers and sisters.

So, when Catholics “pray” to Mary, we’re not praying in the same way as we pray to God. We’re asking for her intercession, the way we ask our brothers and sisters for prayers. That is what we ask from her in the Hail Mary.

And we end by asking for her prayers: “Holy Mary, Mother of God, pray for us sinners now and at the hour of our death.”

What a beautiful prayer! God has given us the beautiful gift of a spiritual Mother to help us become one with him. Wouldn’t we honor him by accepting her?

Vladimir Mauricio-Perez
Vladimir is the editor of El Pueblo Católico and a contributing writer for Denver Catholic.
RELATED ARTICLES
Advent