His Church. Our Experience.
Subscribe
HomePerspectiveIt can’t happen here: A review of Live Not By Lies
Perspective

It can’t happen here: A review of Live Not By Lies 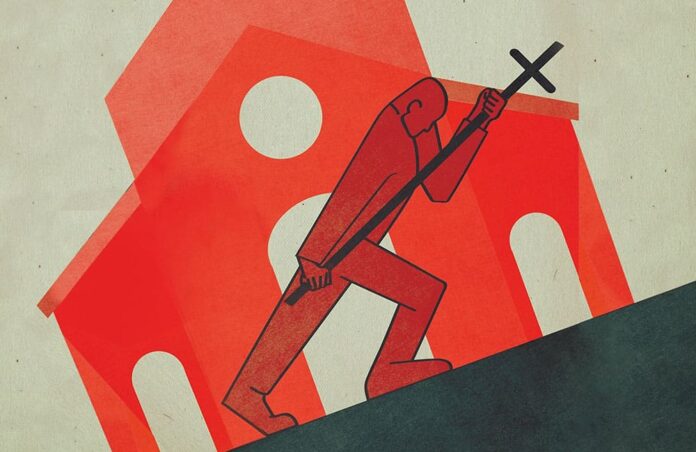 Written by Beverly Gage, it spoke darkly of parallels between the 1935 Sinclair Lewis fantasy, It Can’t Happen Here, and the incoming new president. In the Lewis novel, a populist bully, Berzelius Windrip, sweeps to power in the Great Depression. He attacks blacks and Jews, the “lies” of the press, and the elitism of intellectuals. He promises “every real American family” a cash bonus. Once in office, he locks up Congress and installs a homespun fascism.

As Gage fretted in the Times:

At a moment when instability seems to be the only constant in American politics, It Can’t Happen Here offers an alluring (if terrifying) certainty: It can happen here, and what comes next will be even ghastlier than you expect . . . If Lewis’s postelection vision is what awaits us, there will be little cause for hope, or even civic engagement, in the months ahead. The only viable options will be to get out of the country — or to join an armed underground resistance.

Time has been cruel to the Lewis novel. Fascism never came close to power in the United States, not even under the dreaded Donald. And compared to Orwell’s 1984 or Zamyatin’s We, It Can’t Happen Here is second-rate literature.

But the Times article is still instructive. It’s the voice of a coastal ruling class freaked by the prospect of troglodytes from the flyover colonies wrecking their lawn party. One needn’t be a Donald fan to read the last four years of media loathing and congressional guerrilla warfare for what they are: a slow-motion coup by the nation’s “right people,” the “best people,” against a vulgar — if, alas, constitutionally legitimate —intruder. Trump clearly earned part of that hostility; but only part. As a think-tank friend likes to quip, nothing is more suggestive of Washington’s entrenched government class these days than the 1978 film, Invasion of the Body Snatchers. The aliens running things may look human, but they recoil and shriek at any outsider who’s not One of Their Own.

Here in the real 2020, the conditions that produced a “Big Man” style dictatorship — a Hitler or Franco or Mussolini — simply don’t exist in advanced economies. It Can’t Happen Here really can’t happen here without a collapse in the U.S. standard of living. But something worse can happen, as Rod Dreher argues persuasively in his latest book, Live Not By Lies: A Manual for Christian Dissidents.

As events would have it, we don’t need an American Caesar or the theatrics of a Rubicon crossing. Our political institutions and public consciousness can be, and are being, transformed from the inside out, without any melodrama. The result, says Dreher, will be a comfortable servitude, a “soft totalitarianism,” run by a technocratic, progressive elite, and supported by Big Data and a compliant capitalism. Everyday life will be far closer to the sunny brain-scrub of Aldous Huxley’s Brave New World than the shabbiness and goon-squad brutality of Orwell’s Airstrip One.

Dreher has been the canary in a cultural coal mine for some time. He wrote compellingly about “post-Christian” America long before many Christians were willing to admit the obvious. His best-selling 2017 book, The Benedict Option, linked modern believers to their monastic past for the tools to thrive in unfriendly times. He has two goals in Live Not By Lies, a fitting sequel to his earlier work. He seeks first to explain what’s reshaping American culture and why; and then to suggest the strategies needed today to live and witness Christian hope, despite the changing terrain.

Dreher has a simple, vigorous, engaging style, backed up by exhaustive research and numerous interviews with survivors of Soviet era repression. His book’s title — “Live Not By Lies” — is taken from a 1974 essay by the great Russian dissident, Alexander Solzhenitsyn. And logically so. A survivor of the gulag, Solzhenitsyn committed his life to attacking the mendacity and murderous delusions of Marxist-Leninist ideology. Stalin and his millions of victims were not an “aberration” of the socialist system. They were the inevitable fruit of deceits congenital to Marxist and progressive thought. For Solzhenitsyn, the label “progressive” itself was a misnomer, an example of overweening conceit and skillful self-deception. The materialist view of man was not simply wrong, but a poisonous lie.

Dreher borrows this basic insight and applies it to the smiley-face atheism at the heart of modern technocratic thought. The lie that infects the DNA of atheism kills. Whether the killing is quick and brutal, or a slow, soft strangulation of the spirit, the result is the same.

Part One of Dreher’s book argues, to quote the author, that “despite its superficial permissiveness, liberal democracy is degenerating into something resembling the totalitarianism over which it triumphed in the Cold War.” Dreher examines the seemingly implausible, but very real, parallels between our own society and the ones that gave birth to the totalitarianisms of the last century. Part Two of the text outlines the “forms, methods and sources of resistance” we might use to push back against “soft totalitarianism’s lies.”

The chapters in Part One on “Progressivism as Religion” and “Capitalism, Woke and Watchful,” are especially strong. Anyone imagining big business as instinctively conservative need only remember the speed with which corporations jumped on the same-sex marriage and “gay rights” bandwagon. The lavish business support showered on the “Black Lives Matter” (BLM) movement is also revealing, since — beneath its calls for racial justice — the BLM agenda is toxic to what most Americans believe. The lesson here is simple: Absent a grounding in broadly biblical principles, corporations follow profits, wherever they lead. In Part Two, the chapters on cultural memory, families as resistance cells, and “the gift of suffering,” make for essential reading.

The excellence of this text flows not just from the richness of its content, or the clarity and passion of its presentation, but also from the providential nature of its timing. We live in a uniquely weird moment of uncertainty: a time of peril from a changing culture, but also of opportunity to witness, with our lives, the power of what we believe. It demands a new kind of missionary work, done family to family, friend to friend, local church to local church. It’s a moment when many of our Christian leaders, including Catholic leaders, seem too weak, or confused, or coopted — or dealing with regimes like China, too deluded — to inspire trust.

But the work of the Gospel still does need to be done. And that’s on us. It’s also why a book like Live Not By Lies is so important.

This article was originally published by Catholic World Report. It is republished here with permission.