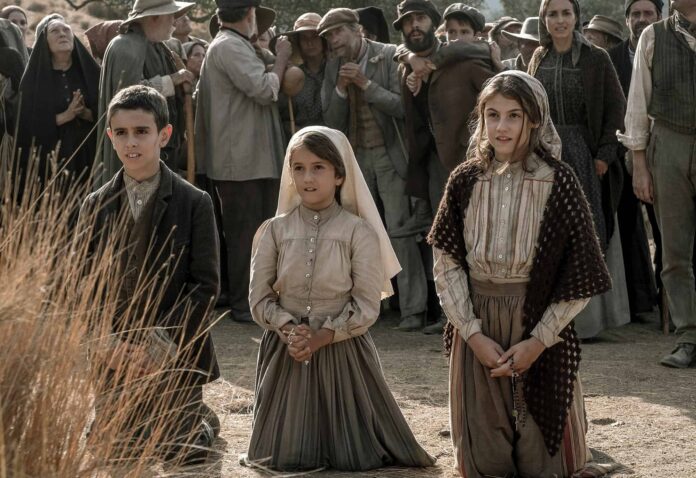 In 1917, near the end of World War I and just before the Spanish Influenza pandemic, something miraculous happened in the quaint little city of Fatima, Portugal.

This miracle and the spiritual shockwaves it caused around the world is beautifully depicted in the new film Fatima, which will be released in theaters and on-demand Aug. 28. Directed by Marco Pontecorva (HBO’s Rome and Game of Thrones) and featuring an original song performed by esteemed Italian singer Andrea Bocelli, Fatima is a well-made film that’s likely the most impactful dramatization of the apparitions of Our Lady of Fatima to date.

The film opens in 1989 when Professor Nichols (Harvey Keitel), while conducting research for a book, goes to visit an elder Sister Lucia dos Santos (Sonia Braga) at her convent in Portugal to speak with her about the apparitions. The story unfolds in a series of flashbacks in which young Lucia (Stephanie Gil) and her cousins Jacinta and Francisco Marto (played by Alejandra Howard and Jorge Lamelas, respectively) attempt to share an important message with their fellow villagers – a message they claim to have received from the Virgin Mary.

Set against the backdrop of World War I in Europe and the rise of the Soviet Union in Russia, the Holy Virgin arrives at precisely the right time. Elegantly portrayed by Portuguese actress Joana Ribiero, she appears to the children on the 13th of every month beginning in May and tells them to pray the rosary fervently for world peace and an end to the war. She warns them about the tragedies that could befall humanity if it doesn’t turn its back on their sinful ways and toward her son, Jesus Christ, through ominous visions of hell and destruction. These scenes, along with several battle scenes which depict World War I, are likely why the film was given a PG-13 rating and may warrant a “fast-forward” if there are younger children in the room.

Catholics are no doubt familiar with Our Lady of Fatima; millions of people make a pilgrimage to the shrine in Fatima each year and she is one of the Church’s most beloved devotions. Even so, it is refreshing to see the whole story unfold on the big screen and see the modern day parallels to the time the three young shepherds were living in. Though the film is difficult to follow at times, it makes up for it with exceptional cinematography and great performances by the cast.

The most lasting aspect of the film is the way it addresses questions of faith and belief. As word about what the three children saw and heard begins to spread around the town, local government and Church officials become incensed by their story as it begins to disrupt the established social order. The mayor, local priest, bishop and even the children’s own families believe them to be liars and tell them to recant what they’re saying. The film’s exploration of this challenging theme begs the question: If Our Lady appeared to three young children today, would the world believe them? Would the Church believe them?

Of course, as the history goes, Our Lady’s apparitions in Fatima culminated in a miracle witnessed by tens of thousands of people on Oct. 13, 1917, called the “Miracle of the Sun.” Many hearts were changed that day, as was the world itself, and the message of Our Lady of Fatima has endured through the years. In fact, in today’s climate of civil unrest and stark political divisions, perhaps Fatima is just the film people need to see to remind them that although history may repeat itself, prayer and faith makes all things new.

Fatima opens in theaters Aug. 28 and will be available for on-demand streaming that same day. For tickets and streaming options, visit fatimathemovie.com.