The Liturgy of the Word: The Lord speaks to his people 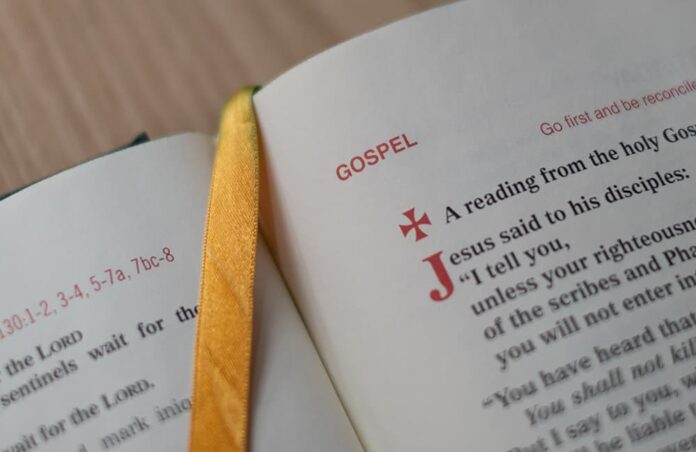 This article is the third in a series the Denver Catholic staff created to help the faithful return to Mass in a deeper way than ever before after an extended absence from it due to the coronavirus pandemic. Click the links below to read the other parts.

Following the Introductory Rites of the Mass, when the faithful are invited to enter a proper disposition for the Sacred Liturgy, we enter into the first of the two main parts of the Holy Mass: The Liturgy of the Word.

In short, the Liturgy of the Word is what adequately prepares our hearts, minds and souls to receive the body, blood, soul and divinity of Christ in the Eucharist. As we turn our focus to the lectern of the church and hear the Word of God proclaimed through his people, we have an opportunity to perk up and lend our ears to listen to the what Lord has to say to each of us.

“In the readings, the table of God’s Word is spread before the faithful, and the treasures of the Bible are opened to them.” So says the General Instruction of the Roman Missal (57), further using the aforementioned “table” analogy. As we begin the Liturgy of the Word, we have a front row seat at this very table.

After hearing God’s Word in the First Reading, we respond, not with our own words, but with beautiful words of praise and thanksgiving taken from the Book of Psalms. The books of Psalms is a collection of 150 sacred hymns used for both private and public worship in the Old and New Testaments, and the Psalm that’s sung (or sometimes recited) during the Mass is thematically linked to the First Reading. While the Responsorial Psalm is usually taken from the Book of Psalms, it occasionally a canticle take from another book of the Bible.

The reason for the Responsorial Psalm is two-fold; first, as the cantor sings the Psalm, the congregation literally responds by singing it back in an act of worship. Secondly, it is intended as a response to the First Reading and helps the faithful to more deeply meditate on the theme of the liturgy. The entire gamut of human emotions is reflected in the Psalms, and instead of mere words, they should be read as prayers that allow us to enter into the mystery of God and his great love for us.

Following the Responsorial Psalm, the lector further proclaims the Word of God with the Second Reading. The Second Reading comes from the New Testament and, while not always linked directly to the First Reading or the Gospel, it contains rich wisdom of what it means to be a follower of Jesus Christ and his Church. These readings are taken from all the books of the New Testament that aren’t the Gospels; the epistles, or letters from St. Paul and other disciples, the Acts of the Apostles and the Book of Revelation. While the Second Reading can be understood independently of the other two readings, it often enriches the lessons to be found in them.

Now we reach what the General Instruction of the Roman Missal calls the “high point of the Liturgy of the Word”: The Gospel reading. The actions that correspond with this part of the Mass indicate its sacredness: the congregation stands and joins in the “alleluia” with the cantor; the deacon or priest holds up the Book of the Gospels and processes in front of the altar to the ambo; following the greeting, “The Lord be with you,” and our response, “And with your spirit,” we trace the Sign of the Cross on our foreheads, mouths and chests in a symbolic gesture whereby we ask for the grace to keep the Lord’s Word ever-present in our minds, on our lips and in our hearts.

We should not think of the Gospel reading as a news report about Jesus Christ or an anecdotal re-telling of what he did while he was on earth; rather, it should be viewed more as a divinely-inspired eyewitness account through which Christ has communicated with his faithful throughout the ages. These are His words, carefully chosen and spoken directly from the tongue of the holy of holies, and inscribed eternally on the pages of the Gospel. At this point of the Mass, we ought to have ears to listen, because what could demand our attention more?

Homily comes from the Greek word for “explanation.” From very ancient times, the presiding priest would take time to explain the Scriptures that had been read, as it’s seen in St. Justin Martyr’s account of the Mass dating to the middle of the first century. The practice of following the reading of Scriptures with a “homily” wasn’t something new for the Christians. The Pharisees had a similar practice in their synagogues, and we even know form the Gospels that Jesus himself partook in it (Lk 4:16-30). So, let’s listen attentively about how the Scripture readings can be put into practice in our daily lives, and how God wants to tell us something every time his Word is proclaimed.

In our surrounding culture, we encounter beliefs that are in direct conflict with our faith. Relativism, for example, is very popular: the belief that there is no universal truth, especially regarding matters of morality and religion. In the Creed, we proclaim the opposite. We proclaim that we believe in one God who created the universe, that we are not an accident brought about by chance, that God has a divine plan, that good and evil truly exist and we can know them. The Creed reminds us that we are not mere spectators in the plan of salvation, but instead challenges us to choose what side we will be fighting on.

Therefore, when we say the words “I believe” on Sunday, we do it as an act of faith and trust, placing ourselves, our loved ones and all our lives in God’s loving care.

The Prayer of the Faithful

The Liturgy of the Word concludes with a prayer for all the faithful of the community and around the world, as well as for all men — also a very early practice mentioned by St. Justin Martyr. St. Paul already encouraged his communities to pray for kings and governors (1 Tim 2:1-4) and his ministry and needs (2 Cor 1:11). During this time, we also lift up the souls of the faithful departed and any other intentions in our hearts.