The Introductory Rites: An invitation to prepare for the Holy Mass

This article is the second in a series the Denver Catholic staff created to help the faithful return to Mass in a deeper way than ever before after an extended absence from it due to the coronavirus pandemic. Click the links below to read the other parts.

The pews of our churches are starting to fill up once again. After a somber Lent without Masses, the doors of churches are opening back up for the faithful to come and participate in the Sacred Liturgy.

Prior to the COVID-19 pandemic and the closure of our parishes, Mass was likely a part of our weekly routine. Every weekend, we would gather at the foot of the altar as one body in Christ, offering our prayers and receiving the fullness of Christ in the Eucharist. This routine of attending Mass each week is a good and beautiful part of the Christian faith — “the source and summit,” as it were.

However, the danger of routines is that they can begin to lose their staying power and meaning over time. How many of us attend Mass each week simply because we have to and not because we actually want to experience it in its fullness? Have we lost touch with the richness of the liturgy and how every piece of it is meant to draw us ever closer to He who laid down his life in love for us? If you answered yes to either of these questions, then the reopening of Masses presents an opportunity to enter into it deeper than ever before.

The Roman Missal divides the Mass into four main parts. Let’s take a look at some of the rich meanings and symbolisms of the Introductory Rites and how our participation in the Mass begins even before the bell rings.

From the moment we set foot inside our parishes, Christ is inviting us to a profound and intimate communion with him in the Mass. As we enter the sanctuary of our parish, it’s instinctual to dip our fingers in the Holy Water font and bless ourselves with the Sign of the Cross. Have you stopped to consider why we do this?

The obvious answer is it serves as a reminder of our own baptism, which is true. As scripture shows us time and time again, water is an important symbol in the life of the Church. The Catechism of the Catholic Church states: “The symbolism of water signifies the Holy Spirit’s action in Baptism, since after the invocation of the Holy Spirit it becomes the efficacious sacramental sign of new birth: just as the gestation of our first birth took place in water, so the water of Baptism truly signifies that our birth into the divine life is given to us in the Holy Spirit. As ‘by one Spirit we were all baptized,’ so we are also ‘made to drink of one Spirit.’ Thus the Spirit is also personally the living water welling up from Christ crucified as its source and welling up in us to eternal life” (CCC 694).

But there’s an even deeper meaning to the blessing with Holy Water that is found when looking back at the early Church. Before entering a sacred space, it was common practice for worshippers to “cleanse” themselves with water. While this served a functional purpose of removing dirt physically from one’s body, it also symbolized the removal of the spiritual grime that builds up on the soul. As St. Clement of Alexandria once wrote: “The best bath, then, is what rubs off the pollution of the soul, and is spiritual. Of which prophecy speaks expressly: ‘The Lord will wash away the filth of the sons and daughters of Israel, and will purge the blood from the midst of them.’”

With this ritual cleansing, we are now ready to enter into the sacred feast that awaits. 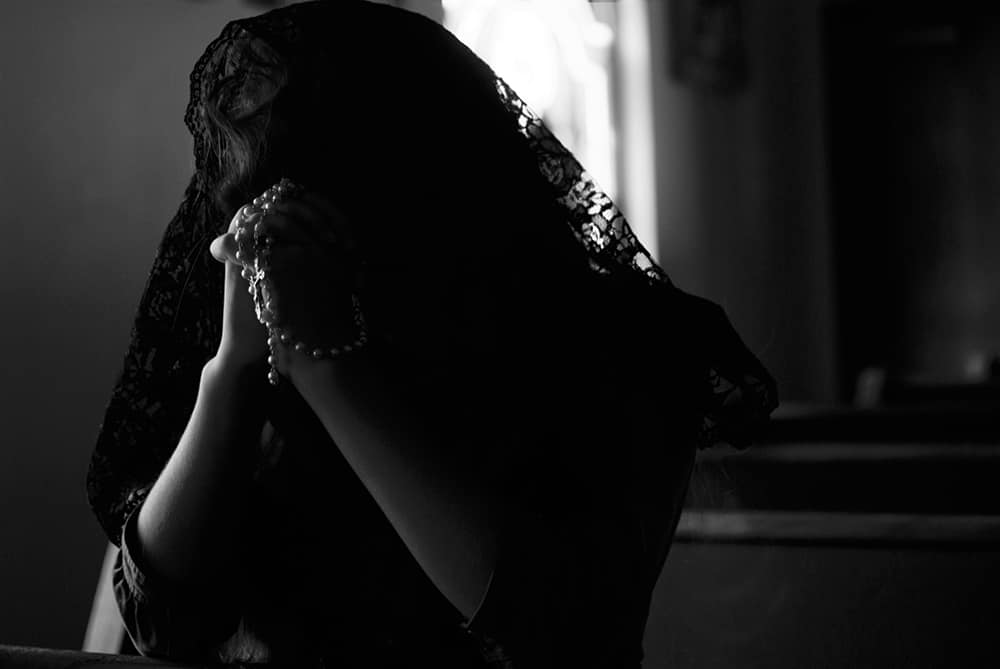 As we make our way to our seat in the pew, the church is silent. Before we sit, again, it is instinctual to genuflect, or kneel, towards the tabernacle in a gesture of reverence for Christ. Historically, the act of genuflection was reserved for rulers and kings as a sign of submission and respect. In the same way, we Catholics genuflect before the true “king of kings” when we enter the church to honor he who is present in the Blessed Sacrament.

The silence of the Church before Mass begins should be a chance for us to simply dwell with the Lord. In the silence, we can listen more intently for the Lord’s voice and what he might be asking us to offer up in the sacrifice of the Mass. It is an opportunity to quiet our hearts, take captive any wandering thoughts, still our worries and anxieties, and just simply exist in the presence of the Most Holy.

The bell rings. Everybody stands. The music begins and a procession enters the church, signifying the beginning of Mass. In a typical Sunday Mass, the procession tends to follow this general order: Altar servers holding the processional Cross (Crucifix), altar servers holding candles, the deacon holding the Gospel, followed by the priest. While this order may seem random, it’s by design.

The processional Cross leads the procession, proclaiming the crucified Christ as the reason for gathering. The candles, sometimes made of beeswax and wicks aflame, signify Christ as the light of the world; the wax and flame also symbolize the dual nature of Christ’s existence as both human and divine. The deacon carrying the Gospels represents both the Words of Christ and the Word made flesh in Christ. Lastly, Christ himself is represented in the priest, who acts in the person of Christ as he celebrates the Sacred Liturgy.

As the precession makes its way through the Body of Christ in the gathered faithful and reaches the altar, they stop to bow. Then, the deacon and priest both kiss the altar as an expression of veneration for the holy sacrifice that is about to take place there. The altar itself represents Christ, “the stone that the builders rejected that becomes the Cornerstone” (Psalm 118). If incense is used, it is meant to symbolize the prayers and plights of all the faithful gathered rising up like smoke to our Father in Heaven (Psalm 141:2 and Rev 8:4).

Every Mass begins the same way: the priest says the words, “In the name of the Father, and of the Son, and of the Holy Spirit…,” and we mark ourselves with the Sign of the Cross.  The Sign of the Cross is a way to acknowledge our reason for being at Mass in the first place: to worship and give thanks to the Father, the Son and the Holy Spirit. More importantly though, it is a mark of our belonging to the Lord.

The Sign of the Cross dates back to the first century of Christianity. Marking ourselves with the Sign of the Cross at the start of Mass is also a way to remind ourselves that the Mass is first and foremost a prayer. In a very real and beautiful way, in marking ourselves, we are uniting our prayers with those of the early Christians as well as the millions of other Christians around the world who are celebrating Mass at exactly the same time.

Following the sign, the priest echoes the words of St. Paul, written in the second book of Corinthians: “The grace of Our Lord Jesus Christ, and the Love of God, and the Communion of the Holy Spirit be with you all.” The most common greeting is “The Lord be with you.” As we respond with the words, “And with your spirit,” we recognize the gift of the spirit the priest received at his ordination.

It is a critical tenet of the Christian faith to acknowledge one’s own sinfulness and imperfection. That’s precisely why Christ came; to reconcile humanity with the God who created them. At Mass, this acknowledgment comes most predominantly during the Penitential Act. As the priest implores us to “call to mind our sins so as to prepare to celebrate [the] sacred mysteries,” we are asked to have a penitential disposition and a purified heart before we engage in the Sacred Liturgy.

The priest then leads the congregation in a brief declaration, called the Confiteor in Latin, as he begins, “I confess, to almighty God, and to you my brothers and sisters, that I have greatly sinned…” In echoing these words, the faithful are declaring their own sinfulness and asking for God’s mercy. In striking our chests three times as we say the words, “through my fault, through my fault, through my most grievous fault,” we imitate an ancient symbol of contrition, described in Sacred Scripture as the “beating of the breast” on several occasions.

Following this declaration, the faithful sometimes recite the Kyrie Eleison, which is Greek for “Lord, have mercy.” Rather than begging for God’s mercy, these words should be approached as a reverent prayer to the Lord in thanksgiving for his mercy and grace. Though we don’t deserve it, we acknowledge his endless love for us as we respond to the words of the priest or deacon, “Lord, have mercy. Christ, have mercy.” Through the Penitential Act, we are thus able to partake of the Eucharistic celebration with a pure heart; it should be noted, however, that if one is knowingly in a state of mortal sin at Mass, the sacrament of reconciliation is necessary in order to receive the Eucharist.

After the Kyrie Eleison, the faithful lift their voices in the Gloria. The Gloria is one of the oldest and most ancient parts of the liturgy, dating back to the 100s. The opening words of the Gloria, “Glory to God in the highest, and on earth, peace to people of good will…” echo the words of the angels to the shepherds on the night Jesus was born.

In a very real way, by singing the Gloria, we are uniting our voices with that of the angels of heaven in a triumphant chorus of praise to the Lord. It is a chorus that transcends the ages and bespeaks the spiritual and metaphysical realities that clash with the earthly in the Holy Mass. It is a song that has been, is and will be sung for all eternity.

Finally, before entering the Liturgy of the Word, the priest leads the congregation in a prayer called the Collect. This prayer is intended to “collect” the prayers of the faithful and unite them with the sacred mysteries that occur during the Mass. As the General Instruction of the Roman Missal states: “The Priest pronounces the prayer usually called the ‘Collect’ and through which the character of the celebration finds expression.”

With our souls now cleansed, our minds now quiet and our hearts now purified and open to the Lord, we are ready to engage in the Holy Mass and receive Jesus in the Eucharist.