The princess, the pea and the mission ad gentes 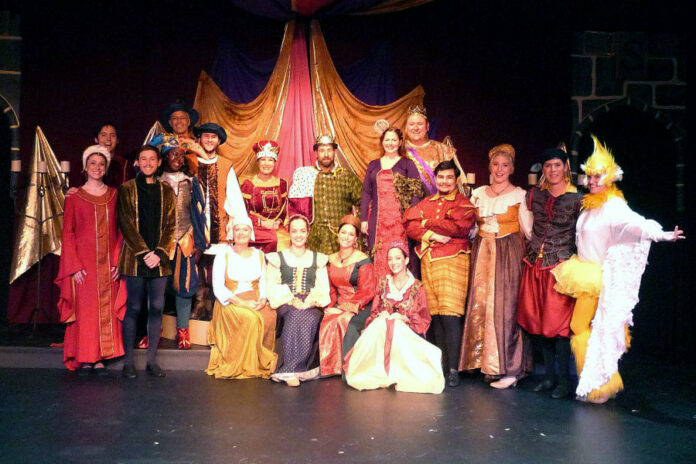 St. Frances Cabrini Parish has seen startling success with their evangelization plan. Instead of bingo or balloon festivals, they’re investing in the arts.

The Arts at Cabrini program started in 1999, when the Littleton parish did a production of “Godspell” as a benefit for Columbine High School. The benefits all went to help rebuild the library after the massacre. The production proved to be successful as a benefit, and the program continued. They have put on 12 productions in 16 years, as well as instrumental and choral concerts.

Dan Wyatt serves on the advisory board of Arts at Cabrini. He said that although they continue to donate the proceeds from each show, the program has proven to have an evangelical impact.

Wyatt said that their commitment to doing quality shows has helped them earn a good reputation both in the local community, and also within the theater world.

“The whole program has brought hundreds, if not thousands, into our church,” Wyatt said.

Some of these people were even actors or backstage help in the productions.

“We know that it’s important to include both professional and amateur performers when you’re trying to do something of quality, because not every parish has a stable full of professionals. It’s also good for amateurs to work with professionals,” Wyatt said.

However, doing a play at a Catholic parish can be a bit disorienting for someone who has had little to no exposure to Catholic culture. Although the cast members are not required to be of any particular faith, the location of the rehearsals and performances are undeniably Catholic. In addition, the last two performances were directed by Father Scott Bailey, who is the priest secretary of Archbishop Samuel Aquila.

Rachel Peoples served as stage manager for Arts at Cabrini’s most recent production, “Once Upon a Mattress.” She also helped Father Bailey with last year’s production of “Joseph and the Amazing Technicolor Dreamcoat.” She is not Catholic. In fact, she was raised Methodist and has since moved towardBuddhism. She said she was skeptical about doing a play with a priest at a Catholic parish.

“I had never even met a priest in real life, except the one who officiated my friend’s wedding,” she said.

She said she approached the auditions with reservations about how it would work. Then she met Father Bailey and realized they shared a sarcastic sense of humor. Then pastor Father Sean McGrath joined them, and began to crack jokes as well.

“I was like, ‘oh, you’re sarcastic, and we’re going to get along,’” Peoples said.
“I felt like everything the media had told me about priests was a lie.”

Peoples said her experience at Cabrini has shown her a side of Catholic culture she didn’t know existed.

“These people are like the nicest people ever. What’s cool is when you come into something, and it’s a culture you’re not a part of, whether it’s religion or whatever, you don’t want to insult anyone. You have to be really aware that you’re stepping into the playing ground. What’s amazing is I’ve never had a theater situation where I’ve felt more included,” she said. “There’s a part of me that would love to be Catholic, but I don’t think I’m wired that way. There’s a lot about the liturgy and the community that I find appealing.”

“It’s about helping people understand that it’s about more than labels. Beauty is beauty. Regardless of what religious tradition you’re brought up in, God is beauty and God is joy. Those are universal truths. What theater allows us to do is sink into those universal truths.”

However, she said she understands that the situation is unusual.

“If you had told me two years ago that I was going to do a show with a priest, and be on the same wave length as him, and get along, I would have been like, ‘Uh-huh, good luck, future me,'” Peoples said.