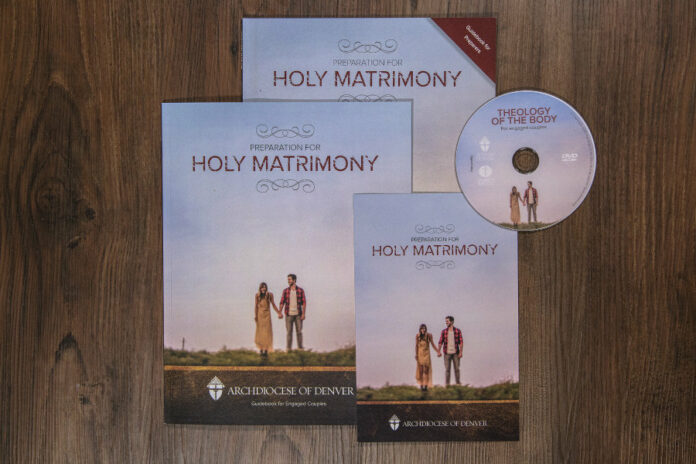 “If a priest is put through seven years of seminary because we’re preparing for a life of vocation, it makes sense that we’d put a significant amount of time in two people preparing to spend their lives together,” said Father Scott Bailey, the archbishop’s priest secretary.

Under the current system, couples are asked to attend Natural Family Planning classes, take a FOCCUS marriage inventory and attend either a weekend retreat or a series of classes. Father Bailey said that in his experience as a priest, these are all helpful tools in preparing couples for marriage. However, he thinks couples want more.

“The couples have asked me for more. So now when I start marriage prep, I’m offering more. So far they’ve all taken me up on it,” Father Bailey said.

Father Bailey developed his own series of topics. He tries to meet with each couple four to six times before their wedding to discuss. However, that amount of planning might not be plausible for everyone.

Luckily, the Office of Evangelization and Family Life Ministries has created high-quality supplemental materials for parishes that want to expand their marriage prep programs.

Carrie Keating is the NFP, Marriage and Family Life Specialist for the Archdiocese. She said she and her team put together a pamphlet, booklet and video series based on the questions her office receives from couples.

“We can see what they’re not getting by the types of calls that we receive,” she said.

The resources will be available through parishes that choose to use them. In addition to essays on Theology of the Body, video interviews with author and speaker Monica Ashuer and an FAQ on common marriage questions, there are also special resources for those leading engaged couples marriage preparation.

“The preparers’ version has a lot of the same material, but also a checklist for people who are new to the role. We specifically tried to answer their questions about the FOCCUS inventory,” Keating said.

Father Bailey said he thinks the materials will benefit couples.

“I think this is very well done,” he said. “This booklet is just a thorough explanation of the entire process…There’s good essays on what is marriage, what makes a fruitful marriage.”

Pastors received the materials for review in early January.