Homeless Outreach at the Cathedral 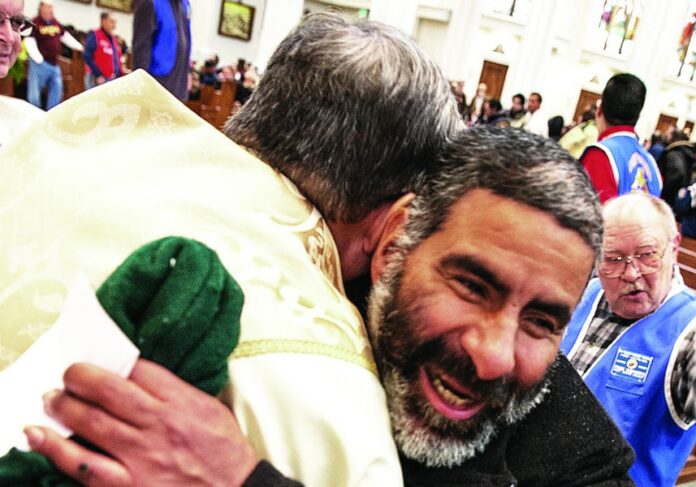 Ron Cattany used to be a government employee, living on Capitol Hill since 1985 and spending his lunch breaks at the Cathedral Basilica of the Immaculate Conception. He left for seminary in 2009. Now he serves as the pastor of the Cathedral he loves so much. He said that his mission as pastor is simple: He wants to serve all the people of Capitol Hill, no matter their economic stance or background. This includes everyone from young professionals to
the homeless.

“We’re doing a lot about maintaining access for the people of Capitol Hill. The poor and homeless are labels, but they’re people. They’re the people of Capitol Hill, and they’re part of what defines this area,” Father Cattany said. “They are part of the population we serve. I think the big difference I’ve seen in the six years that I’ve been away from the Hill is that life on the streets has changed. It’s become more risky—the drug traffic and the lack of permanent shelters have increased exposure to the natural and human elements—people wear out…and they become victims of crime.”

“It made The Denver Post and the Channel Four News. People want their cathedral open,” Father Cattany said.

Embracing all the people of Capitol Hill is not a mission for the faint of heart. Father Cattany is confident he and his staff and volunteers are up to the challenge, but they still need help.

Luckily, other parishes in the diocese have stepped in to help.

Parishioners at St. Vincent de Paul in Denver help make the 15,600 breakfast sandwiches the Cathedral hands out each year. The homeless can go to Mother of God on N. Logan St. or Holy Ghost on California St. for lunch. St. Thomas More in Centennial, Light of the World and St. Francis Cabrini in Littleton all pledge donations of food or funds that haveallowed the Cathedral to start offering afternoon snacks and help out Christ in the City, as well.

In addition, the Cathedral has an active St. Vincent de Paul society. Although none of the Cathedral’s ministries will give people money directly, they do help individuals pay bills and find furniture for people who have recently found housing.

Father Cattany’s reason for doing so much outreach to the homeless is simple: Because they’re here.

“There’s a constant parade of people coming in who need help. We figure out what we can do, what Catholic Charities can do, what the St. Vincent de Paul Society can do, as well as the other service providers in the area—like The Salvation Army,” he said.

Not all the help comes from diocesan organizations. Father Cattany said that every Sunday, the Cathedral has about 1,500 worshippers. Shortly after arriving at the Cathedral, Father Cattany learned that investment income for the Cathedral was down over 50 percent for the last fiscal year. His response was to ask people in the pews to increase their donations.

“The people’s response to give a dollar more a week has been unbelievable—as well as the number of gifts and  bequests. Our expenses are currently $35,000 more than what we take in between offertory and other income. We’re closing that gap,” Father Cattany said.

“That’s why our volunteers are so important,” Father Cattany said. “I’m so grateful for the people who have come forward to help in both service ministries and liturgical ministries since I’ve come here.”

Even if the Cathedral wasn’t actively ministering to the homeless, extra security would still be essential. The Cathedral is located on Colfax Ave. in North Capitol Hill. According to a Denver Police crime map, this area saw 297.5 offenses per square mile in December 2015. According to a separate crime map compiled by The Denver Post, two of the most common types of crime were drug/alcohol related offenses and public disorder.

The cathedral, the mother church of the archdiocese, sits in the middle of this. It also contains the only public restroom between the 16th Street Mall and Downing Street, which Father Cattany said is an important, yet simple factor to the people on the streets.

“Where access has been abused in the past is that people were doing drug deals, having sex, etc. in a sacred space— hat has stopped. We serve the poor and the homeless—we have zero tolerance for drugs and vandalism,” Father Cattany said.

His solution was to hire a security guard to be in the Cathedral during business hours.

“That’s an important message for people to know: When they come here, they’re safe. The changes over the last six months have helped us to keep the church cleaner, and it has cut down on the former illicit activities. Someone watching is worth their weight in gold so that the facilities are open and safe so people can visit,” Father Cattany said.

He said the personnel have also made it easier for the homeless to visit the Cathedral during the day, even if they do simply use the opportunity to rest in safety.

“We will ask them not to snore, but they’re here. They’re safe and they’re quiet, so it’s fine,” he said.

The Cathedral staff works closely with police to help make the space as safe as possible. Father Cattany said that some issues can be resolved by something as simple as a fence.

“We put up a fence around the courtyard at the recommendation of the Denver Police Department. They thought it would help stop drug trafficking, because traffickers will not go into a partially enclosed area because it’s hard to flee, and it has worked,” he said.

“There are some in the neighborhood who criticize us for taking care of the poor because they say we’re attracting it. That’s wrong. We’re the Church. They should be welcome,” he said.