His Church. Our Experience.
Subscribe
HomeWorld & Nation‘It is with joy that we have met like brothers’
World & Nation

‘It is with joy that we have met like brothers’ 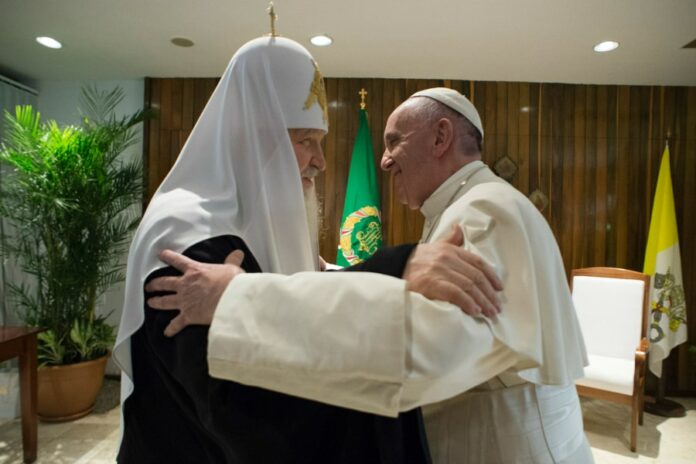 Pope Francis and Patriarch Kirill of the Russian Orthodox Church came together and set a precedent for ecumenical relations in a historic meeting that took place in Cuba on Feb. 12.

The meeting was the first time in history the leader of the Catholic Church and a Russian Patriarch have met. Its importance is marked by the fact that their respective churches contain the largest number of faithful compared to all others.

“It is with joy that we have met like brothers in the Christian faith who encounter one another to speak face to face, from heart to heart, to discuss the mutual relations between the Churches, the crucial problems of our faithful, and the outlook for the progress of human civilization,” the two leaders wrote in a joint statement.

Pope Francis and Patriarch Kirill acknowledged the rift that has long existed between the two churches, and called for improved ecumenical relations in order to address the crises facing Christians today and come to collective solutions.

“By meeting far from the longstanding disputes of the ‘Old World,’” they wrote, “we experience with a particular sense of urgency the need for shared labor of Catholics and Orthodox. We are not competitors but brothers, and this concept must guide all our mutual actions as well as those directed to the outside world.”

The two leaders addressed several pressing matters in their statement, including the crisis within the family and the persecution of Christians in the Middle East.

“Our gaze must first turn to those regions of the world where Christians are victims of persecution,” they wrote. “We call upon the international community to act urgently in order to prevent the further expulsion of Christians from the Middle East.”

The meeting comes as a sort of precursor to the impending Pan-Orthodox Council set to gather June 16-27. This meeting will mark the first gathering of all Orthodox Church leaders in 1,200 years.

Father Andre Mahanna, pastor of St. Rafka Maronite Church in Lakewood and director of ecumenism for Our Lady of Lebanon Eparchy, said the meeting between Pope Francis and Patriarch Kirill has a greater meaning, one that concerns not only the good of Christendom, but of the entire world.

“If Christianity moves in the right direction, making the right moves at the right time, Christianity can save the entire world,” Father Mahanna said. “That’s what Pope Francis and Patriarch Kirill are doing as an outcome of their meeting.”