His Church. Our Experience.
Subscribe
HomeLocal"Like Mary and John at the foot of the Cross": Inside Christ...
Local

“Like Mary and John at the foot of the Cross”: Inside Christ in the City 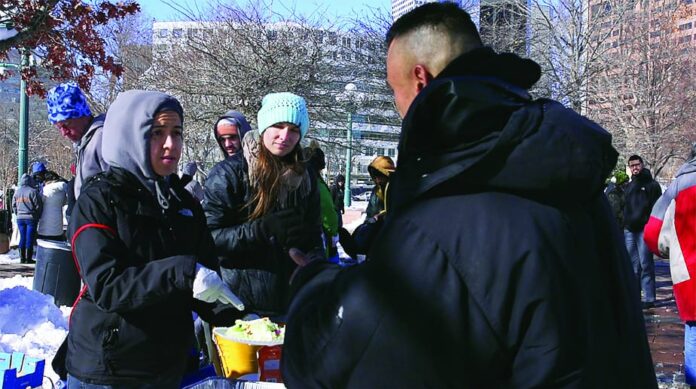 Makena Clawson has been involved with Christ in the City (CIC) since she was in college. She now serves as a full-time missionary.

“Growing up, I always had a special interest in the homeless. I would see them on the street corners and it would hurt my heart to see them suffering like that, but I was so afraid. I didn’t know how to serve,” she said.

Clawson said CIC gave her the training she needed to serve the homeless. She learned basic safety protocol (CIC Missionaries don’t walk the streets alone, but in mixed-gender groups). She was advised on how to talk to people on the street (like anyone else, just make eye contact and introduce yourself first so they don’t feel like they’re on the defensive). But most importantly, she said she’s learned how to spiritually serve the poor.

“Our job is not to alleviate their problems. It’s to be like Mary and John at the foot of the cross. We can’t take them down from the cross, but we can be there with them in their pain,” Clawson said.

THE MANY MINISTRIES OF A MISSIONARY
According to its website, Christ in the City’s mission is to form “missionaries in loving, knowing and serving the poor and empowering others to do the same.”

The practicalities of this can be messy, but Clawson said she has made many “friends on the street,” the phrase CIC missionaries use for those they serve.

“They really have become my friends. They’re not just homeless people or people we serve, but friends,” Clawson said.

On Mondays, Tuesdays and Thursdays, all the first-year missionaries go out and do “street walks” on the 16th Street Mall, Capitol Hill, and Speer area. They typically approach their territory in teams of three, two girls and at least one guy. The missionaries simply look for friends on the street to chat with. Many of them are already familiar with Christ in the City and have a rapport with them missionaries.

“I play cards with a lot of my friends,” Clawson said.

The missionaries might also use this time to do extra favors for their friends on the street. For example, Clawson has a pregnant friend who she takes to prenatal appointments. Some missionaries help friends budget. Clawson and some of the other missionaries have also cleaned the apartment of a disabled friend who is now in subsidized housing.

The missionaries eat breakfast and dinner together in their shared house. They all gather in a community chapel for prayers and Holy Hour and attend formation classes on Fridays. Most of the missionaries live two to three in a room.

Clawson said she has about six inches of closet space in which to hang up all of her clothes. She also said that community life is what enables her to do her missionary work.

“Without our community, I wouldn’t be able to function as a missionary,” Clawson said.

Monday nights are for deep cleaning the house. Tuesday is community night, which can include anything from woodcarving to karaoke. Wednesday mornings are for formation with consecrated men and women from the Christian Life Movement, then serving at Lunch in the Park.

Afternoons are often devoted to office work, such as coordinating the different volunteer groups who will come to visit or helping prospective missionaries apply.

Each of the missionaries also has a night ministry.

Clawson does her night ministry at Samaritan House, where there is an overflow shelter for women.

“There are a lot more women homeless than you would expect, but you never see them because it’s so dangerous for them to be on streets,” Clawson said. “Some of the younger women deal with trafficking issues or prostitution. I know a lot of women on the street who have been raped or abused. A lot of women will seek a man to protect them. Even if they don’t want the relationship to become sexual, it often does in order to keep that protection.”

Clawson eats dinner with the women, and then waits in line with them while the sleeping accommodations are set up.

She said she is painfully aware of how blessed she is in those moments. She said she knows one woman who works two jobs, but still sleeps at the Samaritan House every night. Clawson said this woman is fortunate because she is able to make it to a job instead of waiting in line for various documents or benefits all day.

Clawson said that it is difficult for many homeless to get a job because they do not have a permanent address for applications or eventual checks. The homeless carry everything they have with them, which employers can frown upon. In addition, basic cleanliness required for a job can be difficult for those living on the streets.

Clawson said she often thinks about these things while waiting with her peers.

“It’s so strange. You know that something is wrong that they’re there…I think about my situation and all the benefits and blessings I have, and it’s really humbling,” Clawson said.

That humility, in addition to the community life, is what helps Clawson maintain longevity in her ministry.

“If you’re going to bring them to one resource, you have to be willing to bring them through it. If I’m going to take my
friend to this first appointment at Bella and tell her that I want her to keep her child, then I need to be with her for the whole pregnancy,” Clawson said.

The ministry isn’t easy, Clawson said, but it helps to keep in mind that she isn’t supposed to be every friend’s savior.

“You realize very quickly that you are powerless in the face of their pain. You can’t fix their lives. But you can love them,” Clawson said.

VOLUNTEER WITH CHRIST IN THE CITY

Lunch in the Park: Every Wednesday and the second Saturday of every month.