His Church. Our Experience.
Subscribe
HomeListsSpiritual classics you can read in, like, 30 minutes. Also, they're free.
ListsThe Catholic Faith

Spiritual classics you can read in, like, 30 minutes. Also, they’re free. 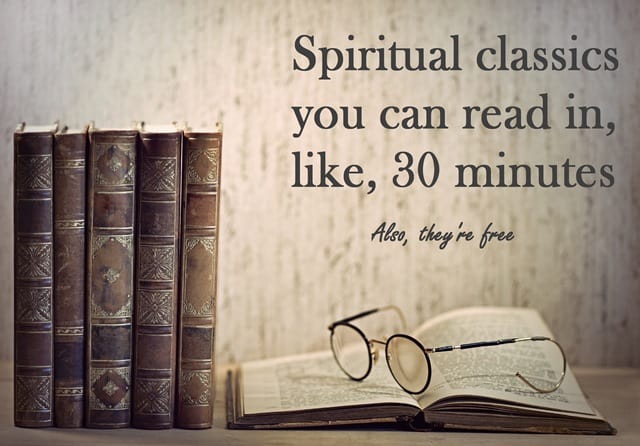 The Roman Catholic Church has existed for 2,000 years and has been blessed with great writers and orators since the beginning. Many of these people’s works are compiled into great spiritual classics, like St. Augustine’s “The Confessions” and Eusebius’ “Church History.”

However, some works are much shorter and are a great way to start reading primary accounts of the Church’s history. Here are some that you should be able to read in one sitting and can find free online.

The Martyrdom of Sts. Perpetua and Felicitas Perpetua was a Roman noblewoman who was still nursing her child. Felicity was a slave in her third trimester of pregnancy. Both were condemned to die in the arena for their Christian faith.

Perpetua managed to dictate most of what happened to them to a friend. This account is the Maryrdom of Sts. Perpetua and Felicitas. It’s stunning. All of the arrested Christians pray together, and help each other find the joy in their sufferings.

No one died immediately in the ring. Instead, they were partially gored by a variety of wild animals while Roman citizens watched. Finally, Perpetua instructed her companions to “stand fast in the faith and love one another, and do not be weakened by what we have gone through.” All of the martyrs were eventually killed by beheading.

The Martyrdom of Sts. Perpetua and Felicitas is an enduring record of faith in the face of adversity, but it’s so much more. It’s a story of Christian friendship, of motherhood, and of true beauty.

Supremi Apostolatus Officio: Encyclical of Pope Leo XIII on Devotion of the Rosary This may sound like a boring list of reasons why a Pope liked the rosary, but it’s so much more than that. Pope Leo XIII starts his 11 paragraph long encyclical by reminding Christians of the many reasons we turn to Mary during times of trouble. He then gives a brief history of the rosary, and then explains why asking for Mary’s intercession is the perfect cure for the evils that afflict modern times.

“..it is one of the most painful and grievous sights to see so many souls, redeemed by the blood of Christ, snatched from salvation by the whirlwind of an age of error, precipitated into the abyss of eternal death. Our need of divine help is as great today as when the great Dominic introduced the use of the Rosary of Mary as a balm for the wounds of his contemporaries, ” he wrote.

Then he finishes with a list of the many, many ways you can gain an indulgence from praying the rosary.

Humanae Vitae
It’s a bit of a stretch to call this one a “classic” since it’s not very old, but it’s still a primary source you can read quickly.

Pope Paul VI wrote Humanae Vitae encyclical on married life and procreation right as many Protestant churches began to accept contraception. In 35 paragraphs, he lays out the Church’s teaching on human life, especially with regards to sexual ethics. In the midst of teaching the Catholic stance on birth control, he even made predictions about the future that have proven to be uncannily accurate.

The Epistle of Mathetes to Diognetus This treatise was written somewhere between 120 A.D.-200 A.D. The writer is an early Christian writing to a pagan official named Diognetus. He begins by explaining (rather harshly) why neither paganism nor Judaism can be the true faith. He then explains how Christians are set apart, and finally explains some Christian teachings. Here is an oft-quoted line from the middle section:

“They [Christians] dwell in their own countries, but only as sojourners; they bear their share in all things as citizens, and they endure all hardships as strangers. Every foreign country is a fatherland to them, and every fatherland is foreign.”