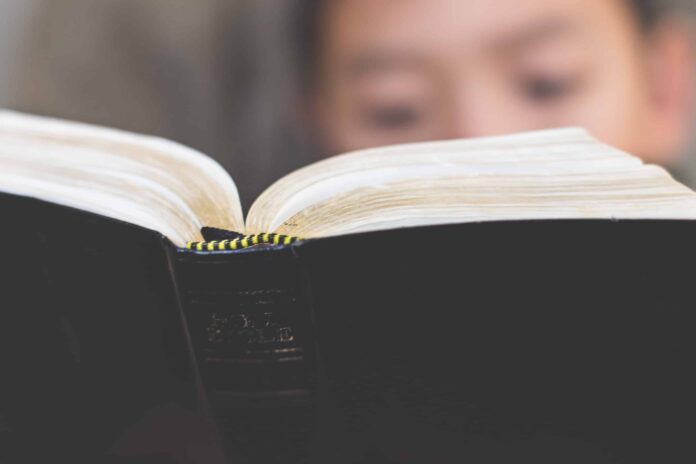 In honor of Catholic bookstore month, we asked Father James Thermos for his thoughts on spiritual reading.

Father Thermos leads the spirituality year for St. John Vianney Theological Seminary in Denver. The spirituality year is a time of deep formation in which seminarians partake in a media fast, spend extra time in prayer and serve the poor. They also spend two hours every weekday studying sacred Scripture, the Catechism, and spiritual classics.

Father Thermos said that all Christians can benefit from a regimen of spiritual reading.

“Spiritual reading aids us in discovering both who God is and who I am, and that I both receive my love and freedom from God and give it back to Him. Therein lies my happiness,” Father Thermos said.

Father Thermos said that spiritual reading can help Christians develop virtues, such as forgiveness or trust.

“We don’t know how to do these things by nature. Spiritual reading provides guidance,” Father Thermos said.

While Father Thermos said that there is a nearly inexhaustible list of good reading for Christians, he especially recommends the following:

In this self-guided retreat, Father Michael Gaitley uses the lives of four saints to prepare the reader for a total consecration to Mary.

“This book is very helpful in learning how to foster our relationship with Mary, and learning what a sweet relationship that is,” Father Thermos said.

Father Walter Ciszek was imprisoned for 23 years in the Soviet Union. Despite the truly horrendous circumstances he had to endure, his memoir shows how God led him through every moment.

“It teaches in such a concrete way to totally trust in God,” Father Thermos said.

“Father Philippe has a deep understanding of how we can make choices from our souls, instead of simply reacting to our lives. It’s very empowering. His writing is informative but accessible, and I would recommend anything he’s written,” Father Thermos said.

Father Carbon was the principal author of the fourth part of the Catechism. He is a Greek Catholic, and his work carries a distinctly Eastern flair.

“This really is a stunning book, although not as accessible as the other writers I’ve mentioned. Father Carbon gives us a description of the liturgy. He explains that within the Trinitarian life, the Father pours himself into the Son and the Son into the Father, and in the Mass we are invited into this,” Father Thermos said.

Neal Lozano has practiced deliverance ministry for over 30 years. His teachings on freeing oneself from evil influences and living in freedom as a child of God have been accepted by many different Christian denominations, including many Catholic priests.

“This is a very concrete and well-tested spiritual path to freedom, because it’s the integrated whole of our need to make acts of faith, and forgiveness, and instructions on how to enter into God’s life,” Father Thermos said.

Father Thermos said that any of the above books, or any spiritual classic, can teach the soul new vocabulary to communicate with God, and ultimately lead to greater freedom and happiness.

“Spiritual reading allows us to understand how God desires to speak to us, and how we are better able to speak with Him,” Father Thermos said.