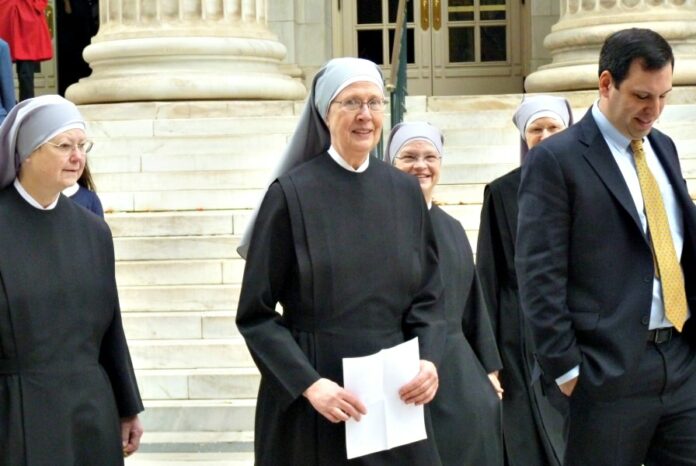 The Little Sisters of the Poor will pursue their last hope in the drawn-out legal battle over religious freedom by taking their plea to the Supreme Court.

The order of sisters ask the court for relief from the federal Health and Human Services (HHS) mandate that requires contraception, abortifacients and sterilizations in employee healthcare coverage—a requirement they say violates their religious beliefs.

The Little Sisters and their attorneys from the Becket Fund for Religious Liberty announced July 23 that they filed a petition asking the Supreme Court to hear their case and grant them protection from the HHS mandate, a part of the Affordable Care Act.

The decision came shortly after the 10th U.S. Circuit Court of Appeals rejected their claim that the mandate would be a violation of their conscience and that the existing exemption “relieves [the Little Sisters] from complicity.”

However, the Little Sisters argue signing the waiver form to obtain an exemption “would make them morally complicit in sin, would contradict their public witness to the value of life, and would immorally run the risk of misleading others.” The form in fact would authorize a third-party to provide the services they find morally objectionable.

The court told the sisters they could violate their religious beliefs or pay steep IRS penalties estimated around $6,700 a day or $2.5 million a year, according to the Becket Fund.

Sister Loraine Marie Maguire, Mother Provincial of the Little Sisters, said they only want to serve the elderly poor.

“As Little Sisters of the Poor, we dedicate our lives to serving the neediest in society, with love and dignity,” Sister Maguire said. “We perform this loving ministry because of our faith and simply cannot choose between our care for the elderly poor and our faith, and we shouldn’t have to. We hope the Supreme Court will hear our case and ensure that people from diverse faiths can freely follow God’s calling in their lives.”

Attorneys filed the petition on behalf of the sisters as well as the Christian Brothers Employee Benefit Trust, Christian Brothers Services, Reaching Souls International, Truett-McConnell College and GuideStone Financial Resources of the Southern Baptist Convention—all religious organizations that seek protection from the mandate.

“The government has lost every single time they have made these arguments before the Supreme Court—including last year’s landmark Hobby Lobby case,” said Mark Rienzi, lead attorney for the sisters, in a statement. “One would think they would get the message and stop pressuring the sisters. The government is willing to exempt big companies like Exxon, Chevron and Pepsi Bottling, but it won’t leave the Little Sisters alone.”

The Becket Fund said the Supreme Court is likely to consider all of the petitions in late September or early October. If the petition is granted, the case could be argued and decided before the end of the court’s term in June 2016.

The Becket Fund is a nonprofit, public-interest law firm dedicated to protecting the free expression of all religious traditions. Its recent cases include the landmark case Burwell v. Hobby Lobby, in which the Supreme Court granted a victory to the arts and crafts retailer.