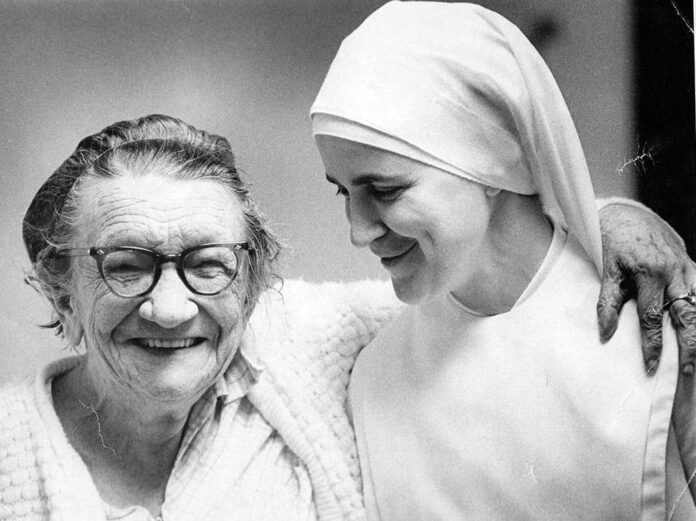 “I saw clean clothes, happy faces, and even radiant health. Between the youthful sisters and these old people reigns a mutual affection and respect to gladden the heart.”

So reads an article in the Sept. 13, 1848, L’Univers newspaper of France reporting on a home for the elderly poor run by the Little Sisters of the Poor.

And so it is today at the Little Sisters’ Mullen Home for the Aged in Denver, which is celebrating it’s 100th anniversary this year.

“We’re an international congregation and the beauty of our vocation is it’s the same spirit everywhere we are,” said Mother Patricia Mary Metzgar, superior of the home located in Denver’s historic Highlands neighborhood.

“There may be differences in the culture—in different areas of the US or in the world—but still that basic mission: loving care for the elderly poor, welcoming them as Christ, caring for them as family, and accompanying them until God calls them to himself.”

With the support of Bishop Nicholas Matz, in 1913 Catholic philanthropist J.K. Mullen bought a 10-acre tract of land at 3629 W. 29th Ave. “to leave something in the nature of a memorial…for the benefit of the aged.”

In 1916, construction began on a four-story brick home on the property. In 1917, five Little Sisters arrived from France, where their congregation was founded by St. Jeanne Jugan, to staff Mullen Home.

In 1975, two wings were added to the building to expand services.

“I love being here,” said two-year resident Ida Landrum, 85. “The Little Sisters definitely carry out [St. Jeanne Jugan’s] spirit. Even Mother [Patricia Mary], who is so busy, is in the dining room at noon serving food to us, cleaning the tables, and in the evening, saying the prayers.”

The home’s renowned family atmosphere is even more profound for Landrum as her husband is also a resident and a daughter works at the home.

“Being here makes you happy because everyone is so sweet,” she said about the residents, staff and volunteers. “You are just smiling all the time with these wonderful people around you.”

“It’s a beautiful place,” she said taking in the homey furnishings and gazing out the expansive windows overlooking the manicured grounds dotted with flowering pots, religious statues, a patio, a Blessed Mother grotto and a Stations of the Cross path.

“The sisters are fantastic,” she added. “We get wonderful care—and there’s many, many activities so we can’t get bored!”

Their praise would gladden the heart of St. Jeanne Jugan, who began the Little Sisters when she lifted an elderly, blind, infirm widow from the streets of Saint-Servan one cold winter night in 1839 and took her home to care for her. She gave Anne Chauvin her own bed and began sleeping in the attic. Soon, other elderly were taken in and young women inspired by Jugan joined in her work.

Right from the start there was a dependence on God’s Providence through other people; [St. Jeanne] brought everyone into that family spirit of caring for the other.”

Currently, nearly 2,400 Little Sisters run homes for the elderly in 31 countries. In the tradition of Jeanne Jugan, they support their homes by begging for alms.

“She would say to people, ‘If you can take care of them materially, I can take care of them physically and spiritually,’” said Mother Patricia Mary. “Right from the start there was a dependence on God’s Providence through other people; she brought everyone into that family spirit of caring for the other.”

For the last 10 years, Little Sister Mary Emilie Simon has begged alms for Mullen Home. She did the same at other homes the previous decade.

“It’s not only for material support, but also to share our mission,” she explained. “Many people who donate may not even go to church, but when we arrive we give them an opportunity to do an act of worship by supporting the elderly and helping the sisters. The work we do is God’s work.”

The Little Sisters will mark their 100 years of loving service in Denver with a gala set for 5 p.m.-9:30 p.m. Sept. 16 at the Marriott Hotel Denver Tech Center.
The evening, emceed by Rocky Mountain PBS news anchor/managing editor John Ferrugia, will include a cocktail hour, dinner, entertainment marking the decades, recognition of the home’s history and honorees, and dancing. Attendees may wear attire representing their favorite era of the last century.

“It’s a celebration of a century of serving and receiving from beautiful people—all those we have touched through our work and all they have done for us,” said Mother Patricia Mary, listing the residents, staffers, volunteers and benefactors.

Adding to the joy of the milestone mark is the fact that Mother Patricia Mary and Sister Mary Augustine Woodruff of the home are both marking golden jubilees this year, while fellow Sister Carolyn Pessartic is marking her silver anniversary.

“And it’s the centennial of Our Lady of Fatima,” Mother Patricia Mary noted. “It’s really a jubilee year here!”