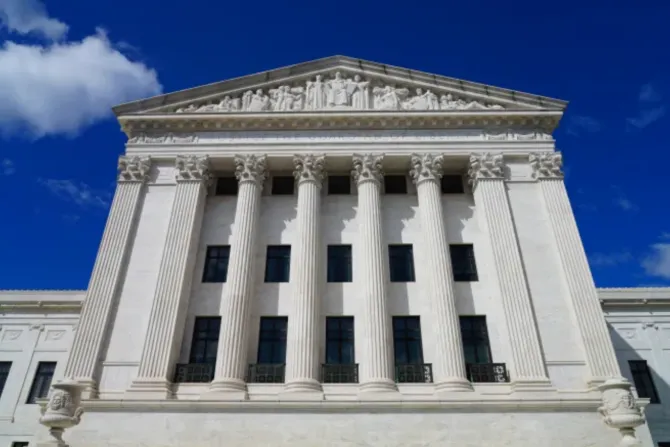 In a stunning development, the news organization Politico on Monday night published what it said was a leaked draft of the eagerly anticipated Supreme Court decision in the Mississippi abortion case, Dobbs v. Jackson Women’s Health Organization.

If authentic, the 98-page draft, allegedly written by conservative associate justice Samuel A. Alito Jr., is a bombshell document that reveals that a five-justice majority is poised to overturn a pair of landmark decisions that have shaped abortion law and national politics for decades — Roe v. Wade, which legalized abortion nationwide in 1973, and Planned Parenthood v. Casey, which affirmed Roe in 1992.

Here is what you need to know about this developing story:

1. People on both sides of the abortion debate have gathered outside the Supreme Court.

On Twitter, reporters noted that barricades went up around the Supreme Court building in Washington, D.C., immediately after the news broke late Monday night. A small group holding candles quickly grew to hundreds of people — with both pro-life activists and abortion supporters present.

Video captured heated encounters and chants including, “My body, my choice!” and “Hey hey, ho ho, Roe v. Wade has got to go!”

A growing crowd of demonstrators were outside the court on Tuesday morning.

2. The decision would not make abortion illegal nationwide.

Roe and Casey recognize that states may regulate abortion in their jurisdiction, but those decisions place strict limits on the nature of that regulation. By overturning Roe and Casey, the draft decision in Dobbs would dismantle this longstanding federal legal abortion framework, thereby empowering states to regulate or even ban abortion, as they see fit.

“Abortion presents a profound moral question. The Constitution does not prohibit the citizens of each State from regulating or prohibiting abortion. Roe [v Wade] and [Planned Parenthood v Casey] arrogated that authority,” the draft opinion states. “We now overrule those decisions and return that authority to the people and their elected representatives,” the draft decision reads. If the decision holds, more than a dozen states will immediately outlaw abortion.

As of Tuesday morning, the Supreme Court itself had made no comment on the Politico report. However, SCOTUSblog, which provides Supreme Court news and analysis, called the document “almost certainly an authentic draft opinion” written by Alito “that reflects what he believes at least 5 members of the Court have voted to support — overruling Roe.”

4. The leak of the draft is shocking.

The deliberations of the Supreme Court are a closely guarded secret, and this breach of confidentiality has sent shockwaves through the country. “It’s impossible to overstate the earthquake this will cause inside the Court, in terms of the destruction of trust among the Justices and staff,” SCOTUSblog tweeted Monday night. “This leak is the gravest, most unforgivable sin.”

Among other things, legal experts worry that the leak could influence the court’s final decision in the Dobbs case.

“Politico reports that the 5 original votes to overturn Roe are ‘unchanged as of this week,’ but does not report (and the leaker would know) that they have all said they will join the Alito opinion,” SCOTUSblog tweeted. “At least 1 is apparently uncommitted. Hence the leak?”

5. The draft is a strongly worded repudiation of Roe.

Alito, a nominee of President George W. Bush who has served on the court since 2006, forcefully repudiates Roe in the alleged draft, calling the decision “egregiously wrong from the start” and based on “exceptionally weak” reasoning.

In the draft, Alito writes that the Constitution “makes no reference to abortion,” and that “no such right is implicitly protected by any constitutional provision.”

“[F]ar from bringing about a national settlement of the abortion issue, Roe and Casey have enflamed debate and deepened division,” the draft continues.

6. Catholic bishops have reacted positively to the purported draft opinion.

Archbishop Salvatore Cordileone of San Francisco tweeted a photo of the pro-life March for Life, held on or around the anniversary of Roe v. Wade, Monday night, saying, “Tonight I am thinking of all the years of hard work by pro life people of all faiths and none. Years and years of patient advocacy, help for unwed moms, political engagement and more.”

Likewise, Bishop Joseph E. Strickland of Tyler, Texas, celebrated, “Thanks be to God for the Supreme Court decision regarding Roe vs Wade. Let us pray that hearts are changed and the sanctity of the life of the unborn once again is recognized in our nation.”

“Let us pray this leaked opinion stands,” he added.

7. The draft is a preliminary document.

The document is dated Feb. 10, 2022, and is marked “1st Draft.” Politico and court experts have emphasized that Supreme Court draft opinions routinely undergo revisions prior to the release of an official decision.

The Dobbs case involves a Mississippi law restricting most abortions after 15 weeks and centers on the question of “Whether all pre-viability prohibitions on elective abortions are unconstitutional,” or whether states can ban abortion before a fetus can survive outside the womb.

In Roe v. Wade, the court ruled that states could not ban abortion before viability, which the court determined to be 24 to 28 weeks into pregnancy.

The nine justices on the court heard oral arguments in the Dobbs case on Dec. 1, and met as a group shortly afterward to conduct a preliminary vote and assign the senior justice in the majority to write a draft of the opinion. A final decision is not expected to come for another two months at the end of the court’s term.

8. There is intense speculation about who leaked the document.

For its part, Politico claimed that it received the draft “from a person familiar with the court’s proceedings in the Mississippi case along with other details supporting the authenticity of the document.”

SCOTUSblog took a particular interest in the Politico story byline.

“Those interested in who leaked the draft should wonder why Alexander Ward — a national security reporter — shares the byline. The leaker would insist that their identity be incredibly tightly held. Politico would not assign someone who didn’t have to be on the story,” it wrote.

Josh Blackman, a constitutional law professor at the South Texas College of Law Houston writing for Reason, shared some thoughts on “Whodunnit?”

“Even though this document was scanned by Politico, the authorities can probably trace it,” he said, detailing the characteristics of the document.

He shared his “completely uninformed speculation.”

“This document was typeset and printed in a formal fashion,” he said. “This document was also likely not circulated to chambers, but was floating around. And whoever had this document does not yet have access to the more recent drafts, or draft dissents.”

9. The leak places the Supreme Court in an unfamiliar position.

“No draft decision in the modern history of the court has been disclosed publicly while a case was still pending,” Politico senior legal affairs reporter Josh Gerstein and national security reporter Alexander Ward reported. “The unprecedented revelation is bound to intensify the debate over what was already the most controversial case on the docket this term.”

“SCOTUS generally has kept its secrets and has kept confidential its internal processes and deliberations,” he wrote. “But the Court does occasionally leak, and it has leaked before about Roe v. Wade.”

He went on to list several examples. “Its recorded history of leaks dates back to mid-19th century,” he said of the Supreme Court. “Some leaks have commented on a decision after its release. Others have provided accounts of personal relationships/conflicts among the justices. And, yes, some opinions have leaked before release.”

10. Pro-life leaders have reacted cautiously, although hopefully, to the leaked document.

The March for Life “will not be providing comment on an official decision of #scotus possible leak until a decision is officially announced,” Jeanne Mancini, the president of the March for Life, responded on Twitter.

Like the legal experts, she also expressed concern about the influence of the purported leak.

“We also believe that given the leak the court should issue a ruling as soon as possible,” she added. “This leak was meant to corrupt the process. It is heartbreaking that some abortion advocates will stoop to any level to intimidate the court no matter what the consequences.”

“The Supreme Court wishes to return the issue of abortion to the American people, and for that reason this draft opinion language is to be applauded,” he said. “It is outrageous that this draft language was leaked, presumably by pro-abortion staffers within the Court. It is a cynical and naked attempt to pressure justices to alter course in Dobbs and to perpetuate abortion violence. The Court should maintain the moral high ground, stick to the clear and courageous language in this draft opinion, and not allow itself to be ruled by the expectations of pro-abortion activists or proxy media allies.”

“It does the work that the majority in Roe and Casey refused to do, looking to the Constitution itself to determine whether it includes a right to an abortion,” she wrote. “The opinion concludes it does not.”

“Here the Court finally takes itself out of the business of legislating abortion – a task for which it it lacks both the authority and expertise,” she added. “Instead, that job will rightly be returned to the people and their elected representatives.”

On the leak, she said, “This is an outstanding opinion, but it is also one that we should not have read tonight …This leak is just the latest iteration of the Left’s shameful campaign to intimidate and undermine the Court, and it should be seen for exactly what it is.”

12. Legal experts say the Supreme Court must conduct a full investigation of the leak.

Blackman of South Texas College wrote that if an investigation cannot resolve what happened, Chief Justice John Roberts “must” resign. Impeachment could also be a possibility, if a justice was involved.