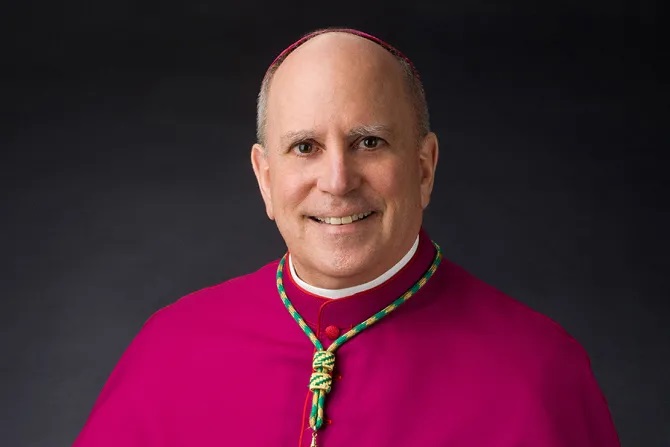 Archbishop Samuel Aquila of Denver has written again to the head of the German bishops’ conference reiterating that the country’s synodal path challenges, and even repudiates, the deposit of faith.

“The Synodal Path does not simply address ‘structural’ concerns: it challenges, and in some instances repudiates, the deposit of faith. Documents of the Synodal Path cannot be read in any other way than as raising the most serious questions about the nature and binding authority of divine revelation, the nature and efficacy of the sacraments, and the truth of Catholic teaching on human love and sexuality,” Aquila wrote in a May 2 letter, obtained by CNA, to Bishop Georg Bätzing of Limburg.

Over the course of the last year, the Denver archbishop has engaged in an open epistolary back-and-forth with the Church in Germany over its synodal path, which advocates sweeping changes to Church teaching. He previously released a 15-page commentary in May on the Synodal Path’s first text, saying it puts forward “untenable” proposals for changes to Church teaching.

More recently, Aquila was among the drafters of an April 11 open letter that warned the synodal path may lead to schism. Signed by more than 70 bishops when it was released, the letter has now garnered 101 episcopal signatures. The most recent signatories include Cardinal Joseph Zen Ze-kiun, Bishop Emeritus of Hong Kong; Cardinal Camillo Ruini, based in Rome, and Archbishop Leo Cushley of St. Andrews and Edinburgh, Scotland.

You can view the full letter with the updated list of signatories here. Additional prelates may request that their names be added to the letter by sending an email to episcopimundi2022@gmail.com. The map below shows the nationalities of the signatories.

Germany’s “Synodal Path” is a process that brings together lay people and bishops to discuss four major topics: how power is exercised in the Church; sexual morality; the priesthood; and the role of women. When the German bishops launched the process, they initially said that the deliberations would be “binding” on the Church in Germany, prompting a Vatican intervention that rejected such claims.

The synodal assembly has voted in favor of documents calling for the priestly ordination of women, same-sex blessings, and changes to teaching on homosexual acts.

Bätzing wrote in an April 14 response to Aquila’s concerns that abuses in the Church had hampered her witness, and that “the synodal path is therefore also our attempt to make a credible proclamation of the Good News possible again.”

The Archbishop of Denver wrote this week to Bätzing thanking him for his April 14 letter, which he said he “found in German on the internet.”

“You state in your letter that the Synodal Path is not properly understood by the signatories of the Open Letter and that they did not provide evidence for their concerns,” Aquila wrote.

To that end, he attached to his letter a memo of more than four pages of “examples from the German Synodal Way that are cause for concern to the Cardinals and Bishops who signed the letter.”

The Denver archbishop noted that “The gist of your response seems to be that the German Church must adopt a new approach to the faith due to the past failure of German bishops to protect children. This is a very strange argument. Why must Catholic teaching on fundamental issues of doctrine and the moral life change because German bishops have failed to teach effectively and govern honestly? The Church’s faith did not lead to the clergy abuse scandal!”

“A failure to stay attached to the vine, Jesus Christ and the choice to adhere to the world rather than the Gospel led to the crisis. The sinful nature of fallen man and the failure of those in authority to take seriously concerns brought to them contributed to the crisis. The failures to form one’s heart and mind, after Christ’s; to seek only the Father’s will; to deny oneself, to take up one’s cross and to follow in the steps of Jesus; and to revere the moral law and abide by what the Church teaches based on both revelation and reason — all these helped to create the abuse crisis.”

Aquila noted that the Church in the U.S. has also been dealing with clerical sex abuse, and that “the result has been a thorough reform of our practices and oversight structures,” which “has relied on the extensive engagement and co-responsibility of our laypeople. Yet none of this extensive and effective reform has involved questioning either the basic truths of the faith or the Church’s settled convictions about the proper expression of human love.”

The archbishop reiterated that “There can be no concordat of mutual acceptance between the truth of divine revelation and Catholic doctrine, on the one hand, and the distorted anthropology of today’s advanced secular culture, which promotes an increasingly dysfunctional sexuality, on the other. There is nothing salvific in blessing destructive thought and behavior. To surrender to the Zeitgeist is not a matter of reading the signs of the times; it is a betrayal of the Gospel.”

“The only way we Christians will bear fruit today is if we stay attached to Christ, and teach with charity and love, with a tenderness that will accompany people out of their brokenness, sin, and wounds … genuine synodality is not a parliamentary process but a matter of listening to the Holy Spirit, who will keep us in the truth and remind us of what Jesus teaches.”

Aquila urged the Bishop of Limburg to “consider seriously what the many bishops who have voiced their concerns about the Synodal Path and its problematic results to date have put before you and your brothers in the German episcopate. Catholics all over the world will be impacted by the Synodal Path’s outcome. And what we have experienced in our own dioceses is much different than what is being proposed in Germany.”