‘Angel of Charity’ brought Sacred Heart badges and prayer leaflets to each firehouse in Denver. 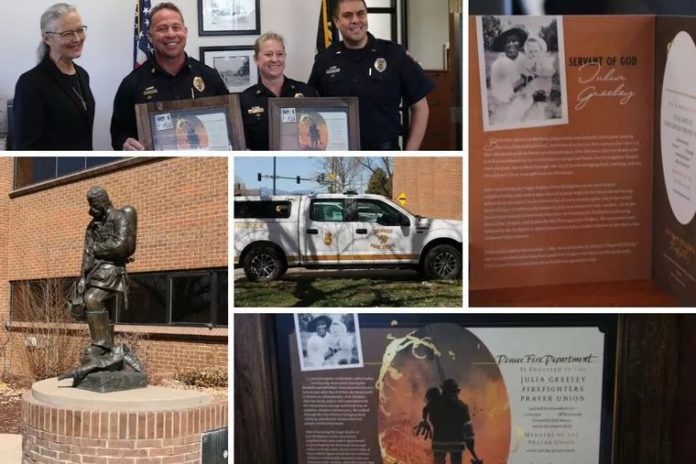 In the late 1800s and early 1900s, Greeley, a former slave, spent every First Friday traveling by foot to each of the fire stations in the Denver metro area to pray with all of the firefighters in the city. She walked an estimated 13 miles, despite suffering from severe arthritis and being blind in one eye, and brought Sacred Heart badges and prayer leaflets to each firehouse.

“Julia’s greatest love was the Sacred Heart of Jesus,” said Mary Callan, executive director of the Julia Greeley Home in Denver. “She would see all the firefighters in person. She always prayed for them.”

“This is the first time that we’re doing something [as the Julia Greeley Home] that isn’t focused on homelessness and women coming out of homelessness,” Callan said. “It’s something where the women are participating in giving back in the most powerful way through prayer.”

The prayer union is the first of its kind, dedicated specifically to firefighters, and operates similar to a Mass guild, with small donations accompanying the enrollment of each firefighter or fire station. Participants can be enrolled for a year at a time or perpetually, and the prayer union is open to all types of fire crews, inner city to wildland, and any type of department, full time to volunteer.

Mass is celebrated for all of the enrolled firefighters and fire stations on the 11th of each month by the Capuchin Franciscans at Our Lady of the Angels Friary in Colorado Springs, Colorado.

“We ride, oftentimes, a train of grace that we don’t even realize is around us,” said Johnson, who also serves as a chaplain for the Denver Fire Department. “Having somebody pray for me and interceding on my behalf to God, it just brings me great joy. It helps to strengthen what we do.”

“The more firefighters we enroll, the more we can donate back,” Callan said. “[The percentage for the Julia Greeley Home] goes directly to the women to get a roof over their heads and training to get back on their feet.”

Seeing the Distressing Face of Christ

“[The biggest challenge is] determining what is the individual’s most important need and being able to provide them with the appropriate resources,” he said.

For Johnson and his fellow firefighters, responding to calls involving the homeless is another opportunity to act in the spirit of Julia Greeley.

“As a firefighter, I’ve been on calls where you’re interacting with people that society wills to throw away; they are on the fringes,” he said. “You’re going out to the marginalized and to those in the moment of greatest need. They are calling you as a perfect stranger to come help them. In that person, you’re called to see the distressing face of Christ.”

There are many parallels between what firefighters do and how the Julia Greeley Home serves the homeless, said Callan.

“What we do is we help women who are formally homeless get off the street and rebuild their lives, get jobs, and learn life and job skills,” she said. “Firefighters have a lot of contact with homeless people. [Firefighters] reach into another kind of burning building that no one sees, getting these people back on their feet, helping them survive and get to the next step.”

On March 31, Callan presented the prayer union’s first enrollment certificates to the Denver Fire Department and to Denver Fire Station No. 1. During the presentation, Denver Fire Chief Desmond Fulton said he knew of Julia Greeley from stories his uncle would tell about Denver’s “Angel of Charity,” as Greeley was often called. Fulton heard about her service to the poor but did not realize her affection for firefighters until the prayer union was brought to his attention.

“What an amazing woman,” Fulton said. “This is the goodness we need right now.”

Pixley called it a “tremendous honor” to be a part of the Julia Greeley Firefighters Prayer Union.

“[This] allows for DFD firefighters, their family and friends to all be recognized through the very special bond of prayer,” Pixley said.

Who Was Julia Greeley?

Servant of God Julia Greeley was known for her faithful service to the poor and the outcast, sometimes under the cover of night, so that the people she was helping would not be embarrassed by her assistance. She often pulled a red wagon through the city to deliver food and other supplies to the homeless.

In 2016, the Archdiocese of Denver began the process of putting her cause up for consideration of canonization. As part of the cause, her remains were exhumed in 2017 and now lay entombed in Denver’s Cathedral-Basilica of the Immaculate Conception. Her cause for canonization now lies before Rome.

“She faced racism, she faced discrimination as a woman, she made absolutely nothing, but yet she takes her excess and she serves,” Johnson said. “It was extremely impactful that this woman who had nothing willed and wanted to serve.”

Greeley entered the Catholic Church in 1880 and was a daily communicant at Sacred Heart parish of Denver. In 1901, she became an active member of the Secular Franciscan Order. She is the first person from the Archdiocese of Denver who has been brought forward for consideration for canonization.

“An ordinary layperson, in ordinary circumstances of her life, finds a way to allow God to work in it, to become extraordinary,” Johnson said. “Julia’s story is really timely for all of us — firefighter, layperson, priest or bishop. What she gives us is an example of virtuous behavior that is absolutely inspiring.”

On the fence about the SJV Lay Division? Attend a free talk and see what you’re missing!

New life and the gift of accompaniment

Victory, mourning and the road ahead in post-Roe Colorado