Just ‘do the next thing’: How one Colorado couple is raising four children with Down syndrome 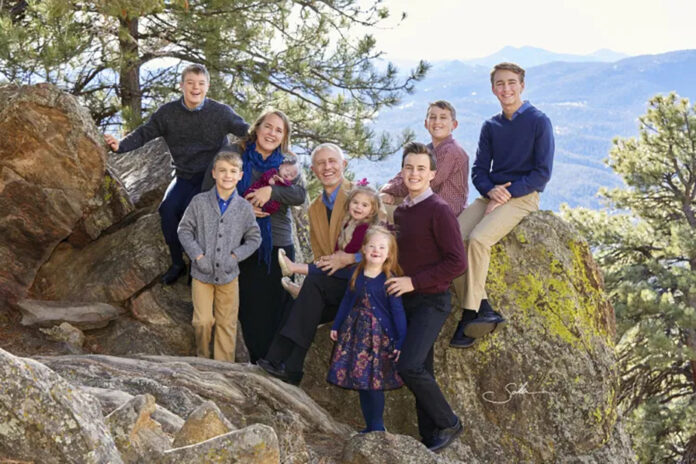 Many things in the McGarrity household start early, including preparations for Mother’s Day. Sonia McGarrity has eight children, ranging in age from three to 18, three of whom are adopted. Four kids, including McGarrity’s third oldest son and their three adopted daughters, have Down syndrome. For Mother’s Day, McGarrity has all of her children — biological and adopted — sign cards for the three birth mothers and six grandmothers of the girls.

While McGarrity first thought about adopting a child with Down syndrome after she miscarried in her second pregnancy, the thought took a back seat when she and her husband, Jeff, welcomed sons Sean, Jeffrey, and Brendan into their home. Jeffrey was born with Down syndrome, unbeknownst to the McGarritys before his arrival. Pregnant with their fourth child, the McGarritys moved from Washington, D.C. to Colorado.

“We were extremely busy, doing therapies, trying to find and remodel a house, and were not actively discerning adopting,” Sonia McGarrity said. “But, when Brendan was about two years old, I had had two miscarriages, and we were open to having more children. One thing that struck our hearts was to learn about Down syndrome.”

In their research, the McGarritys learned about how many children were being aborted with a prenatal diagnosis.

The McGarritys began a home study in May 2010 to see where God would lead them. Shortly after finalizing their home study, they were contacted by Cecilia’s birth parents to ask if they would be open to parenting her. They agreed and Cecilia, or “CeCi,” came home to them in December of 2010. Throughout the adoption process, the McGarritys professed their Catholic faith and shared that they would be raising their children in the Church.

“Nobody understands what these beautiful souls, with their unconditional love and acceptance of every single person they meet, can do,” Sonia shared. “It’s about opening your heart to say ‘God, I want to love as much as you will give me love. We are surrounded by love and opportunities to love.”

Sonia and Jeff welcomed a fifth son, Augustine in 2011, followed by the adoption of RoseMarie in 2015 and Charlotte in 2018. RoseMarie and Charlotte both have Down syndrome.

When asked about the possibility of adopting Charlotte, McGarrity, who was 50 at the time, said she didn’t think she had the energy to chase after a two year old. In her prayer, she told God that if he was calling them to do this, it needed to be really clear.

“We didn’t think we could handle it, but obviously we can because she’s ours,” McGarrity said with a laugh. “There is this beautiful thing that happens when you meet your [adopted] child where you are like, ‘Oh, yeah, she’s mine.’ God knows who your children are going to be and he picks you specifically to parent them.”

A normal day in the McGarrity household begins around 5:30 a.m. Sonia makes breakfast and lunches for the whole family and tries to get everyone out the door to one of their four respective schools by 8:30 a.m.

“I made two loaves of french toast this morning and six pounds of bacon,” Sonia said. “My kitchen right now is an utter wreck. We wake up and the whole kitchen is clean, and getting seven children out the door for the day with lunches, it’s chaos.”

With the older children off to school, Charlotte, now two-and-a-half-years-old, has in-home therapy, and Sonia cleans up from the morning rush. Then, they head to a local food bank, where Sonia volunteers stocking shelves for a couple of hours.

In the afternoon, Sonia and Charlotte return home and get ready for the other kids to return from school. She also tries to have dinner ready by 1 p.m., for the kids to “grab and go” in the evening between various therapies, sports and music activities. Each of the children with Down syndrome have about eight hours of therapy every week.

“I probably have about three pages of things to get done, and might get through a quarter of a page each day,” Sonia said. “I’m never caught up, but that’s where the Lord has to keep saying, ‘I’m not asking you to complete the list. I’m just asking you to do what you need to do today.’ And the most important thing I have to do every day is love my kids.”

Though she never imagined she would have four children with Down syndrome, Sonia feels that God has blessed her family with children who are “little love machines,” she shared.

Today, Sonia and Jeff are active in helping other parents who have a prenatal diagnosis of Down syndrome. They invite expecting parents into their home and talk openly about the challenges and joys of parenting children with Down syndrome, as well as adoption plans.

“Our goal has always been to say, ‘If you are a birth parent and you have a prenatal diagnosis, come and meet our family. Come and see what life is like,’” Sonia said. “Because there is this sort of unknown with a stigma attached, and what doctors are telling you, that makes it difficult to decide whether to parent or write an adoption plan.”

The McGarritys’ home study remains open, and Sonia has been active in various Facebook groups to let expectant mothers know that if they have a prenatal diagnosis and are considering an abortion, she is happy to parent their child.

“God has called us to spread the joy of Down syndrome adoption,” she shared.

When asked how she does it all, Sonia credits her husband, a supportive parish, great girlfriends, and good neighbors. She also makes time for frequent confession and encourages her kids to do the same.

“I have a wonderful husband,” she said about Jeff, who works as the director of music for St. Thomas More Catholic Church in Centennial, Colorado. “Everybody who knows us says we make a great team. Our new thing is that every morning when he wakes up, he comes downstairs, gives me a big hug, and he says, ‘Are you ready to do it again today?’ It reminds me that whatever comes our way, we can tackle it, we can take it, and I’m not alone.”

The family ends each day with Compline from the Liturgy of the Hours, singing the Marian antiphon and praying for forgiveness for whatever is on their hearts.

“Number one, I remind myself every day that we live in the ‘valley of tears,’ but this is not our home,” Sonia said.

“My only job is to get myself and my kids to heaven. I just do the next thing.”