Why icons still matter to a modern world 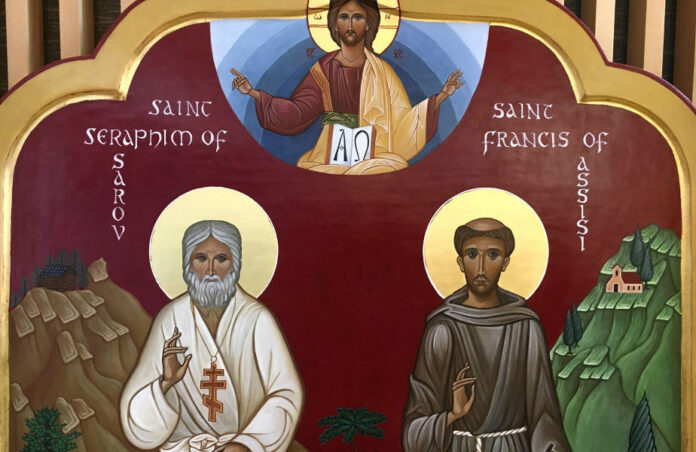 Icons have existed from the time of the early Church and grew in popularity over the years as an aid in prayer and worship — but today, icons are often seen as irrelevant to our modern world because of their perceived rigidity and austerity.

But it hasn’t died out, and there’s a reason.

In Denver, instructor Laurence Pierson, a former nun in the Community of Beatitudes, teaches a course at the Botanic Gardens called “Sacred Doorways — Byzantine Iconography,” which is the only icon painting class in the greater Denver metro.

Pierson attributes the long-surviving tradition of icons to the same reason the Church still exists.

“Tradition has great value, and if it’s an art that’s survived so many centuries, that’s because there is a great value to it, and it’s not only the tradition, it’s that mainly, it’s rooted in the Gospel,” Pierson said.

In an article called “Sacred Icons,” painter Aidan Hart quotes John of Damascus, who said of icons, “What the written Word proclaims through letters, iconography proclaims and presents through colors.”

It is the same story of the Gospel, presented in art rather than word, and as the Gospel is timeless, so is the art of icons. And while they may look austere, that’s not something to be afraid of, nor is it irrelevant in our modern time.

“Even though an icon might look austere, it actually drives us beyond superficial emotions — they want us to go deeper. It’s a deep joy,” Pierson said. “I think you have to be quiet and go deeper. In the spiritual life, our ascetic aspect doesn’t have to be forgotten, and sometimes there is an ascetic aspect, and our human condition needs to be redeemed.”

“It’s a medium that has to be rediscovered, and there is so much potential,” Pierson added.

The deep spirituality of icons is part of what has preserved them throughout the roughly 2000 years that they’ve been around. Hart explains that icons are “not just pictures to look at, but are a door to heaven, a way of meeting those who dwell there.”

Hence the name of Denver’s class, “Sacred Doorways.” The material use of the paintings are a way for us to pass through the material world and into a knowing of the holy people depicted. This is just the tip of the spiritual meaning of icons.

The specific look of the icons: the elongated nose, the wide eyes, the dimensions and perspectives, are all intensely symbolic.

“Icons do not depict outward appearances, but reflect something of invisible, spiritual realities. In fact, all good art does this,” Hart said.

“An artist isn’t just someone who puts colors [on a canvas],” Pierson said. “An artist reveals the reality of this world, which sometimes isn’t possible to see. And icon painting is revealing this invisible reality and making it visible with lines and colors.”

Icons do not depict outward appearances, but reflect something of invisible, spiritual realities. In fact, all good art does this.”

So what are icons revealing through their symbols?

Here are just a few insights from Hart:

– Inverse perspective: “There is a number of perspective systems used in icons. With inverse perspective, the lines converge on us, the viewers. This serves to include us in the action depicted,” Hart said. “A sacred event in the past is still acting on us today, ‘Today Christ is risen.’”

– Flatness: “It helps us pass through the icon to the person and events depicted. The aim…is not to replace the subject depicted, but to bring us into living relationship with them,” Hart said.

– Anatomy: “The eyes and ears of people are often enlarged, and the nose elongated. This is to show that the saint is someone who contemplates God, who listens to him, who smells the fragrance of Paradise,” Hart said.

Pierson has been painting icons for 25 years and teaching for 18. Following the rich tradition of the painting style is the first step of entering into the “spiritual journey” of painting an icon, Pierson said.

“It’s very important for me to get rooted in Byzantine tradition, especially because it’s an art that comes from the Eastern world,” Pierson said. “You have to be very careful not to distort ancient tradition but also find a way to speak to our modern world, so it’s a very delicate balance. For me, that’s crucial, to find this balance.”

“[Painting] has to be a solitary experience because you have to pray, but for me, it’s important to be anchored in a community and liturgical life,” Pierson said.

Pierson, who is commissioned to paint icons for the community often, begins with research and prayer, both to whom the icon is depicting and for the person who will receive the painting. Then the painting begins, which is an intense, multi-layered process.

First, a binder, which is what the pigment adheres to in order to stay on a board, is created. The binder consists of egg yolk mixed with an equal part of water. This is mixed with the paint pigment and a few drops of water, creating the egg tempera medium with which icons are traditionally painted.

Next, guiding lines are traced into a gesso-covered wooden board and then engraved with a tool. Then, paint is added, layer by layer, beginning with dark colors and finishing with lighter colors. “It is as though the iconographer begins with darkness and death, and ends with light and resurrection,” Hart said.

The final stage is writing the saint’s name; then the icon is blessed by a priest and venerated. The working time varies, but it is a very long process, taking up to a year.

The act of painting is something Pierson discovered she needs for her life to flourish — “essential,” even.

With icon painting, it “combines art and the vertical connection to God,” Pierson said.

And the connection to God is experienced deeply throughout the painting journey.“There is a journey — there’s a time you feel discouraged or bored. Even though you don’t feel it, you live by faith, trusting what you do has meaning and will bear fruit,” Pierson said. “With iconography, there is a Presence.”

“This whole painting journey teaches you about yourself, it takes patience — it takes time. You cannot finish an icon painting in a few hours. You have to trust the process. You have to trust someone else is inspiring you, even though it might not perfect. It’s all very like our spiritual life. It teaches us all that in a very practical way,” she added.