His Church. Our Experience.
Subscribe
HomeLocalShepherds in the street
Local

Shepherds in the street 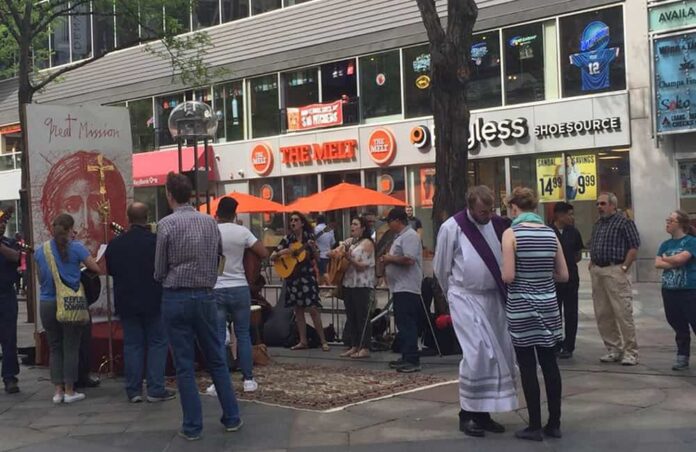 For the last several years, the Neocatechumenal Way, a charism of the Catholic Church that aims to bring people to mature Christian faith, has announced the Good News of Jesus Christ in public squares across the archdiocese during Easter season. This year, for the first time, the “Great Mission” evangelization project took place on the 16th Street Mall in downtown Denver.

Since it’s inception 35 years ago, the 16th Street Mall has remained one of Denver’s top visitor attractions, drawing both tourists and locals to the mile-long corridor that offers a wealth of restaurants, shops and businesses. It was the perfect place for the Great Mission, said Denver priest Father Grzegorz Wojcik, a native of Poland, who was the priest on the Way team from St. Louis Church in Englewood that announced the Good News at the mall.

“It was great … to show [people] the Church is looking for them!” said Father Wojcik, pastor of St. William Church in Fort Lupton. “It showed that even in Denver, a modern city, Jesus Christ goes to them.”

It was the most incredible moment of evangelization that I’ve ever experienced.”

On May 14, the fifth Sunday of Easter, the Great Mission team provided five Catholic priests who offered confession on the mall.

“I’ve never seen that before, that the sacrament [of reconciliation] comes to the street,” said Flora Potter, a member of the Great Mission team who was tasked with holding a sign that said: “Confession is available with a Catholic priest, TODAY.”

“It was the most incredible moment of evangelization that I’ve ever experienced,” Potter said. “Taking the love of Christ to the people on the street. Shepherds, smelling like the sheep!”

Pope Francis is known for encouraging “shoe leather” evangelization and for urging priests to “be shepherds living with the smell of the sheep.”

“As people read the words on the sign their faces expressed awe, disbelief, sadness, suffering, joy, anger, sorrow, delight, disgust and gratitude. I realized that this was true evangelization!” Potter said.

“It was taking God to the streets,” she added, “where people can see him.”

Father Wojcik said the experience reminded him of scenes from the Scriptures where people are going about their daily lives, and, suddenly, Christ appears.

“Jesus was present right there,” Father Wojcik said. “He was looking for them. He was giving happiness, the opportunity to be free.”

Despite the wealth of willing priests, Father Wojcik said only about 20 people availed themselves of confession.

“The few people who came, despite the distractions of the 16th Street Mall, was amazing,” he said.

“It was a great privilege to make this announcement that changes lives,” he asserted. “How can you live the same after you know that Jesus is right here on the 16th Street Mall, on 16th and Champa streets?”

Most passersby, the priest said, found the evangelization effort curious and entertaining.

“Some stopped for a minute or two,” he said. “Many took pictures, but very few stayed to listen. That was a great discovery: that Jesus is like a spectacle—as if they didn’t need him. There is no time for Jesus—I have to live my life.”

What may have appeared foolish to many people, wasn’t to the evangelization team.

“We were able to talk to students, homeless, veterans living in shelters, people who live downtown who are affluent. Every walk of life passes through there,” said Sue Van Doren, coordinator of the Way’s 16th Street Mall 13-member Great Mission team, which was supported by a community of some 40 people.

“We were announcing the Good News that God loves you and knows you by name,” she said. “There was prayer, singing and dancing—people from our community were speaking to … those on the street. It was really wonderful.”

“It was to show the face of Jesus Christ,” he said. “To make the announcement of the Gospel. It was the Church being present, reminding people of the love of God.

“Just like a lighthouse that shines to ships in the sea,” he added, “people don’t have to come in [to the Church], but they need to see Christ [so] they can be saved.”