His Church. Our Experience.
Subscribe
HomeLocal'Thank God ahead of time!': The Faith of Father Solanus Casey
Local

‘Thank God ahead of time!’: The Faith of Father Solanus Casey 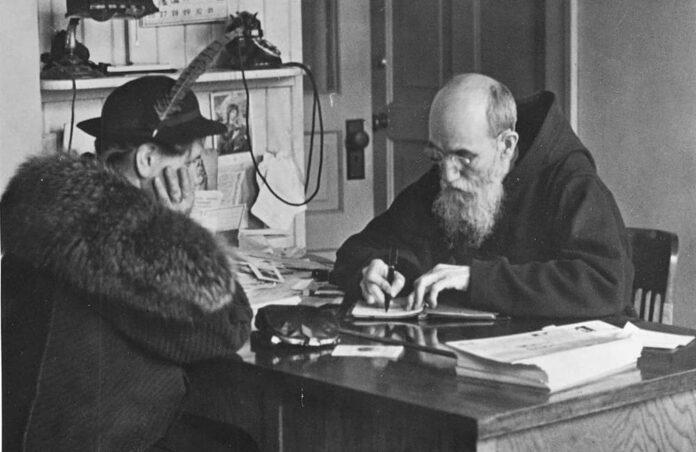 Father Joseph Mary Elder serves as the Vocations Director for the Capuchin Franciscans.

“Thank God ahead of time!” This was the spiritual counsel Father Solanus Casey gave to the parents of sixteen-month-old Elizabeth, a little girl dying of leukemia.

The anxious parents had heard of Father Casey through a relative who was part of a prayer group at the Capuchin monastery in Detroit. “He’s a saint, and heals people all the time,” the relative assured them. Traveling from their home in Dearborn, Michigan to the Capuchin monastery in Detroit, the Fanning family was seeking a miracle. All medical avenues had been exhausted. The child was pale, would not eat, and so weak she could not walk up the steps to greet the beaming, bearded Capuchin priest who awaited them with a radiant smile.

After listening patiently to the story of their tragic situation, Father Casey responded with his typical simple wisdom: “Thank God ahead of time!” The Capuchin priest counseled the parents not to let sadness and worry frustrate the designs of the God of mercy. Instead, they should thank God now for the good He would certainly do for their daughter in the future. He then bent down, handed Elizabeth a piece of candy, and whispered to the dying child, “You’re going to be all right.”

Upon returning to their home in Dearborn, the specialists at the hospital could not believe Elizabeth was the same child they had seen only days before. All traces of the leukemia had left her. She was alert, healthy and full of life. Elizabeth’s cure was no isolated incident. In fact, Father Casey’s reputation for healing was so prolific that he was referred to as “the holy priest,” and, upon his death, scores of people came forward reporting similar miraculous healings of everything from polio to infertility.

“Thank God ahead of time!” This saintly wisdom was something Father Casey had learned through his own his experiences of suffering and perseverance in prayer. Born in the small farm town of Oak Grove, Wisconsin in 1870, Bernard Francis Casey was the sixth of sixteen children born to Irish immigrant parents Bernard and Ellen.

At eight years of age, Bernard, who his family nicknamed “Barney,” contracted diphtheria which caused permanent damage to his voice and took the life of two his siblings. Following his grade school education, Barney worked in a series of jobs including lumberjack, a hospital orderly, a state prison guard and a street car operator. It was in this last job that Barney witnessed a drunken sailor stab a woman to death. Barney began to seriously examine the direction of his own life and responded to a call he had long felt to the priesthood.

In hopes of becoming a diocesan priest, Barney enrolled at St. Francis High School Seminary in 1891 at the age of 21, but did not understand the Latin and German languages in which the classes were taught. He was strongly advised to consider a religious order which might ordain him as a “simplex” priest who could celebrate the Mass, but would not have faculties to preach or absolve sins.

Faced with an unforeseen dilemma, Barney turned to God. While praying before a statue of Our Lady, he heard a distinct female voice instruct him: “Go to Detroit.” There Barney was accepted into the Order of Capuchin Friars Minor, a 16th century reform order of the Franciscans, and received the religious name of “Solanus.”

As predicted, Casey was ordained a “simplex” priest on July 24, 1904. What might have been an embarrassing humiliation for some, reflected a Capuchin who knew Casey well, “brought forth in him a greatness and holiness that might never have been realized in any other way.”

For the next fourteen years, Father Casey served as a porter and sacristan in Yonkers, New York. Even in his first parish, people were already beginning to refer to the young Capuchin as “the holy priest.” Father Casey served at parishes in Manhattan and Harlem, but eventually returned to Detroit where he continued his work as a porter and sacristan. It was during this period that Father Casey also began working at the Capuchin Soup Kitchen which served the city’s poorest and hungriest during the Great Depression. At times the line of people waiting for their first meal of the day grew to more than 2,000.

By this time, Father Casey had garnered a reputation as a man whose prayers brought about miracles. As many as 150 to 200 people came to see him on a daily basis, seeking healings, advice or simply his blessing. Many of these same people considered his intercession instrumental in their cures.

Father Casey had an incredible faith in the goodness and providence of God. His own deep conviction inspired faith in others whom he would marvel with such simple sayings as “Blessed be God in all his designs,” “God will answer our prayers,” and of course, “Thank God ahead of time!”

In 1946, Father Casey was transferred to the Capuchin novitiate in Huntington, Indiana due to poor health. He died on July 31, 1957 and with his last breath entrusted himself to God, saying, “I give my soul to Jesus Christ.” An estimated 20,000 people processed by his coffin at St. Bonaventure Church in Detroit.

A Father Solanus Guild was formed in 1960 in Detroit. Within seven years, the guild had over 5,000 members, many of whom had been recipients of Father Casey’s comforting reminder to always thank God ahead of time.

On May 4, 2017, the Archdiocese of Detroit issued a statement that a miracle involving the cure of a woman suffering from a life-long skin condition has been approved. Father Solanus Casey will soon become only the second U.S.-born male to be beatified.

The Capuchin Franciscans, of whom Father Casey was a member, have three friaries in the Archdiocese of Denver. They continue the traditional work of their order, ministering to the poor, the imprisoned, the sick and those in most need. You can learn more about their life and spirituality by visiting their website, www.capuchins.org.

Father Casey to be beatified Nov. 18

A recent miracle that occurred at the same Detroit hospital where Father Casey died has further solidified his beatification, which is set to happen Nov. 18 in Detroit. While not officially approved by the Vatican, the DeOrnellas family can’t help but think Father Casey was there in the room for the birth of their new daughter Adalena. She was in some distress while she was being born, but in the end, she came out healthy as can be. Nichol Alessandrini, Adalena’s grandmother, was insistent on a cross being placed on the wall of the hospital room during the birth. After the baby had arrived, she snapped a picture of her new granddaughter and posted it to Facebook, an expected act made miraculous by what she saw in the photo. “You can see an angel above the baby’s head,” she told the Detroit-based Tri City Times. “I knew right then and there that somebody in that room was thankful that I wanted that cross put back up on the wall.” Presumably, Father Casey was the one thankful for that little act of faith.