Our Lady of Fatima is iconographer’s 100th 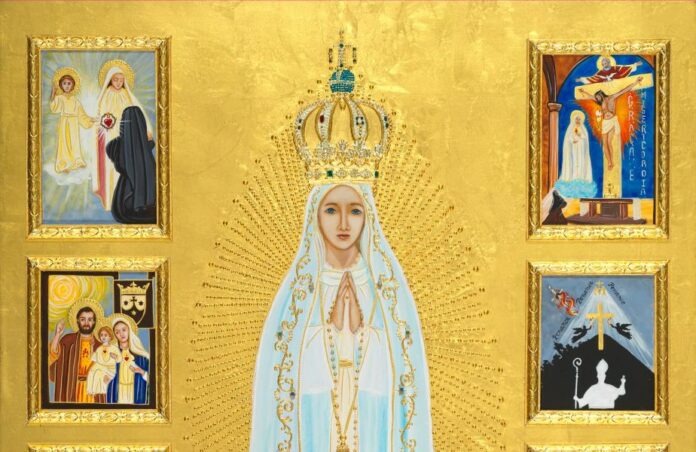 Vivian Imbruglia, the iconographer who was commissioned to write the icon of Servant of God Julia Greeley for the Archdiocese of Denver, recently wrote her 100th icon: Our Lady of Fatima.

It’s a milestone for the California-based iconographer that is made all the more significant by the 100th anniversary of the apparitions of Fatima. The beautifully crafted and exquisitely detailed icon resides at the World Apostolate of Fatima Shrine in Washington, N.J.

“I had known the anniversary of Fatima was coming up, and I had [a] strong Holy Spirit urge to write an icon for it,” Imbruglia recalled. “As I noted the three [other] icons I was already working on would be numbers 97, 98 and 99, it occurred to me Fatima would be 100.”

The preparation that goes into writing an icon is more of a spiritual process than it is about the actual painting of the icon, Imbruglia said.

“With every icon, I need to spend time getting to know the subject, and this was especially so with Fatima. It is true that I had an urge that told me I needed to write an icon that celebrated the 100th anniversary, but in reality, I didn’t actually know that much about Fatima,” she said.

Her research ensured, which usually consists of some Google searches, but more important, conversations with people. A friend of Imbruglia’s, who is a member of the World Apostolate of Fatima, provided her with a good base knowledge and referred her to a few more experts, including Father Andrew Apostoli, whose book Fatima For Today is one of the most widely respected volumes on the historic event.

Father Apostoli affirmed the very important elements of the Fatima story that were critical for Imbruglia to include in the icon, which was exciting for her, but also overwhelming.

“I was going to have to depict the visions experienced by the children, some of which were really elaborate,” she said. “I had no idea how I would do it.”

Imbruglia began praying a novena to Our Lady, and within three days, the icon came more and more into focus. She began to paint, and gradually within the larger icon, six smaller icons appeared. Once she finished, she sent the finished product to Father Apostoli, whose words of encouragement were exactly what Imbruglia needed to hear.

“He said the message of Fatima needed to be spread, he said it several times, and he said that message had been captured in the image,” Imbruglia recounted. “His affirmation meant the world to me. This is the goal of every iconographer: To put word into image.” Image of Our Lady: Sister Lucia, one of the visionaries to whom Our Lady appeared in 1913, wrote of seeing her: “It was a lady dressed in all white, more brilliant than the sun shedding rays of light, clear and stronger than a crystal glass filled with the most sparkling water pierced by rays of the sun.”

The young shepherds: Francisco, Jacinta and Lucia showed great faith and held steadfast to her command to return each month on the 13th day. They have halos painted around their heads as indicators of their holiness. Francisco and Jacinta were recently canonized as saints on May 13.

The Immaculate Heart: Our Lady revealed her Immaculate Heart to the three shepherd children during her apparitions, which Sister Lucia described as “a heart encircled by thorns which pierced it. … Outraged by the sins of humanity and seeking reparation.”

Vision of Hell: Our Lady revealed to the children a terrifying vision of hell, which Sister Lucia describes in her memoirs. Here, as per Sister Lucia’s words, hell is depicted as a “vast sea of fire” and “plunged in this fire” are “souls [of the damned] … transparent like burning embers, all blackened or burnished bronze, having human forms.”

The Angel of Peace: In 1916, an angel of peace appeared to the children as a means of preparing them for their meeting the Queen of Heaven. He appeared to them a total of three times bearing a message of prayer, reparation and sacrifice.

The Miracle of the Sun: On Oct. 13, 1917, 70,000 people gathered to see the final apparition of Our Lady. When she appeared, she opened her hands and made them reflect on the sun, making the sun look like it was dancing. After she had disappeared into the sun, St. Joseph, the child Jesus and Our Lady in a blue mantle appeared beside the sun. St. Joseph and Jesus traced the sign of the Cross with their hands, blessing the world.

First Saturday Devotion: On Dec. 10, 1925, the Virgin Mary and child Jesus appeared to Sister Lucia in her convent cell. They instructed her to “say to all those who, for the next five months, on the first Saturday, confess, receive Holy Communion, recite the rosary and keep me company for 15 minutes while meditating on the 15 mysteries of the rosary, in a spirit of reparation, I promise to assist them at the hour of death with all the graces necessary for the salvation of their souls.”

Vision of the Trinity: In June 1929, Sister Lucia received a vivid vision of the Holy Trinity, which she describes in her memoirs. She saw a cross appear over the altar, with a man appearing above it and another nailed to the cross. A dove of light was over the chest of the man above, and a chalice with a host dripping blood floated in front of the cross. Underneath the right arm of the cross was Our Lady of Fatima, and under the left arm were the words “grace” and “mercy.”

The Third Secret of Fatima: Our Lady bestowed upon the three shepherds three apocalyptic visions and prophecies that are known as the three secrets of Fatima. The first was a vision of hell; the second was a foretelling of World War II, and the third was revealed as a series of symbols. In her vision, Sister Lucia saw an angel with a flaming sword; a bishop dressed in white; a cross atop a mountain; and angels shouting, “Penance! Penance! Penance!”

Consecration of the world: On May 13, 1982, Pope John Paul II invited the bishops of the world to join him in consecrating the world, and with it Russia, to the Immaculate Heart.