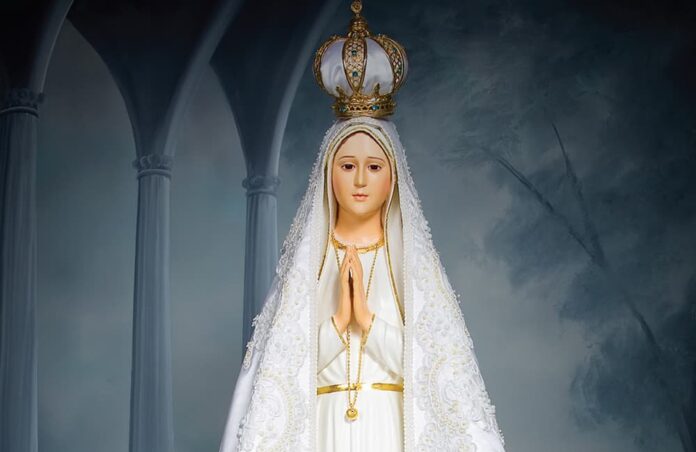 If you can’t travel to Portugal this year for the 100th anniversary of the apparitions of Our Lady of Fatima, take heart, Mary has come to visit you.

The International Pilgrim Virgin statue, which was carved and blessed in Fatima, Portugal, is in the Denver and Colorado Springs dioceses now through April 8.

“Mary comes to visit her children,” Carl Malburg, custodian, told the Denver Catholic. “[She] goes to distant places to see the people who can’t visit Fatima.”

On May 13, 1917, the Blessed Mother appeared to three shepherd children at Fatima and again on the 13th of each month through October, bringing the world a message of conversion, prayer and penance. The three young seers were Lucia dos Santos, 10, and her cousins, Francisco and Jacinta Marto, 9 and 7 respectively.

At the last apparition, which included the famed “miracle of the sun” witnessed by thousands and reported by newspapers, Mary called herself “the Lady of the Rosary.”

The Church later declared the apparitions worthy of belief.

“The first Pilgrim Virgin statue was commissioned and blessed in 1947 by the bishop of Fatima so everyone could learn about the Fatima message,” Malburg said.

It was sculpted by Jose Thedim based on the description of Lucia, who had become a Carmelite nun.

“The original one was very busy, but after 25 to 30 years they retired it,” Malburg said. “What I and others have are (hand-carved) copies of the original. The bishop (of Fatima) recognizes about 12 or 15.”

People are captivated by the beauty of the statue and feel Mary’s presence, Malburg said.

“When we look at pictures of people, we feel closer to them,” he said. “That’s the moral presence. That moral presence is very strong in the statue. … You really can’t explain it without experiencing it.”

The Fatima message complements the Lenten practices of prayer and sacrifice, Malburg said, adding it’s a special grace that she has come to the faithful during Lent.

“On Ash Wednesday we make nice commitments but we are weak little children who need to ask our Mother to help us,” he said. “Ask her to help you to do a better quality rosary and other disciplines. She wants to be our help.”

The Fatima message of conversion, prayer and penance is as relevant today as it was when given 100 years ago, Malburg said.

“We’ve already had three popes in the 21st century and they’ve all said its more relevant today than then,” he said. “Pope Francis will be in Fatima on May 13, the 100th anniversary. Why would the pope choose to travel to that spot? He wants to remind people to be even more aware of Fatima and its importance.”

“Wherever we go, that’s what results,” he said, cautioning, “We’re here today and gone tomorrow. What we hope is that a new spirit of prayer and a new spirit of Eucharistic reverence will remain.”

People who return to the Church or to confession after years away are the most important miracles that occur, emphasized Malburg, as those who are healed of physical ailments will eventually die of something else.

“But when we return to the sacraments,” he said, “to Communion and confession, it changes someone’s eternity.”

The Pilgrim Virgin statue will be at the Cathedral Basilica of the Immaculate Conception March 18 and at Regis University March 28-29. It will also visit several Catholic grade schools and parishes. The tour will conclude with a pro-life procession and rosary in front of Planned Parenthood in Glenwood Springs. For the complete schedule, visit www.pilgrimvirginstatue.com and click on “tour” then “Colorado.”

The remaining schedule is also available to view on the Denver Catholic event page.