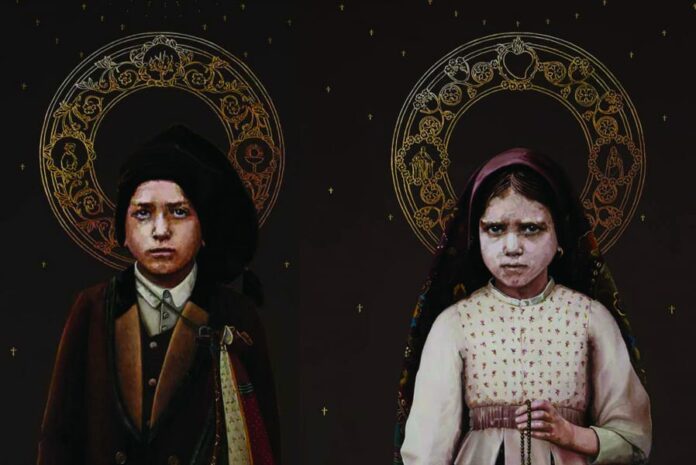 One hundred years ago this month, as the world sank deeper into the world war that would leave the continent devastated and millions dead, three shepherd children from the small, quiet Portuguese hamlet of Aljustrel met a “Lady more brilliant than the sun” in their family-owned field outside town known as Cova da Iria.

The “beautiful Lady” would appear six times to Francisco and Jacinta Marto, and their cousin Lucia de Jesus dos Santos, ranging in age from 7 to 10 years old, inviting these “privileged children of the Father,” as St. John Paul II referred to them, to dedicate their young selves to a life of prayer and sacrifice in reparation for the conversion of sinners.

“You are going to have much to suffer,” Our Lady of Fatima said on the occasion of the first apparition, “but the grace of God will be your comfort.”

Our Lady was to be their tutor, as Pope John Paul II pointed out at the beatification Mass for Jacinta and Francisco in 2000. “Devoting themselves with total generosity to the direction of such a good Teacher [Our Lady], Jacinta and Francisco soon reached the heights of perfection,” he said.

Their path was one of prayer and stringent self-mortification, a path they chose to follow more intensely after seeing a vision of hell on July 13, 1917.

In an interview with Denver Catholic, Sister Angela of Fatima Coelho, postulator for the cause of canonization for Francisco and Jacinta, said that the vision moved all three, not to be traumatized, but to do something to alleviate the sufferings of others, and to console the heart of God.

They were “children with a great sense of salvation history,” and they knew that “with sacrifices they could change history,” she said.

Both Jacinta and Francisco contracted the flu virus that had spread throughout Europe in 1918, and both died within three years of the last Marian apparition on Oct. 13, 1917, after having offered up their little lives for the conversion of sinners.

On May 13, Pope Francis will canonize the youngest two shepherd children on the same day of the month and in the same spot where they first encountered Our Lady in 1917, and the Church will hold up before all the faithful two illiterate village children, barely passed the age of reason, as spiritual giants of towering sanctity worthy of imitation.

Total gift of self

Jacinta Marto (1908-1919) was the youngest of the three shepherd children, and by many accounts, the young seer was bright and charming, although at times spoiled and self-centered.

According to Sister Angela, Jacinta’s encounter with Our Lady and the abundant graces she received transformed her into a mystic that had a particular love for the Immaculate Heart of Mary and the Eucharist, and who had great compassion “for all forms of human suffering.”

“When she saw hell, and the suffering of the war, people going hungry and the suffering of the Church, she experienced compassion and a sense of responsibility and a role in salvation history,” said Sister Angela. “Here we have the nucleus of Jacinta’s spirituality. She wanted to make herself like Our Lord, she surrendered herself without limits for the good of others.”

Jacinta also had a particular love for the Pope, and prayed intensely for the Holy Father. In fact, Saint John Paul II thanked her publicly for her prayers during her beatification Mass.

“I express my gratitude to Blessed Jacinta for the sacrifices and prayers offered for the Holy Father, whom she saw suffering greatly,” said the pope.

“It was beautiful to see the Pope giving thanks in public to a 9-year-old girl,” recalls sister Angela, who is also the vice-postulator of the cause of beatification of their cousin, Sister Lucia of Jesus and of the Immaculate Heart, who died in 2005 at the age of 97.

Francisco Marto (1908-1919), was a child “in love with God,” as described by Sister Angela. “Since the angel’s apparitions (he appeared many times in 1916 before the children saw the Virgen), Francisco saw that God was sad and that it was important to comfort him,” said the religious.

“He had a contemplative tendency. He loved nature, the birds, the sun. He felt a special attraction to be alone, and to be filled with God’s presence. He would spend hours in front of the Blessed Sacrament. He could be three hours in the same position,” said Sister Angela.

“Francisco teaches us to capture what is essential in life, and to live our lives in accord with this,” she said.

Sister Angela point out how the shepherds had different gifts and they received the Virgin’s message in different ways. At first Francisco could not see her. Then he could see her, but could not hear her. Lucia could see, hear, and talk to her. Jacinta, on the other hand, could see and hear her, but never spoke to her.

“Apparently, it seems that Francisco was the least favored, but for him that was not a problem. He did not felt devaluated,” said the postulator. “That was his role in the apparitions, just as the role of Jacinta and Lucia was different. Each one accepted their condition with joy and humility.”

Francisco teaches us to capture what is essential in life, and to live our lives in accord with this.”

She said Francisco teaches us “to focus on the essential, to develop intimacy with God, not to lose the horizon in life and to accept our condition of being loved by God and to feel that as the most important. To accept our gifts, how we are, our history, to know that we are loved by God and that this love invites us to love, and not to focus on ourselves.”

Sister Angela recounted a story from Francisco’s deathbed, when Lucia gave him many intentions for the time he reached heaven. He answered with sincerity and his characteristic focus: “You better ask Jacinta, because I’m afraid of forgetting. When I see Jesus, I’m just going to want to comfort him.”