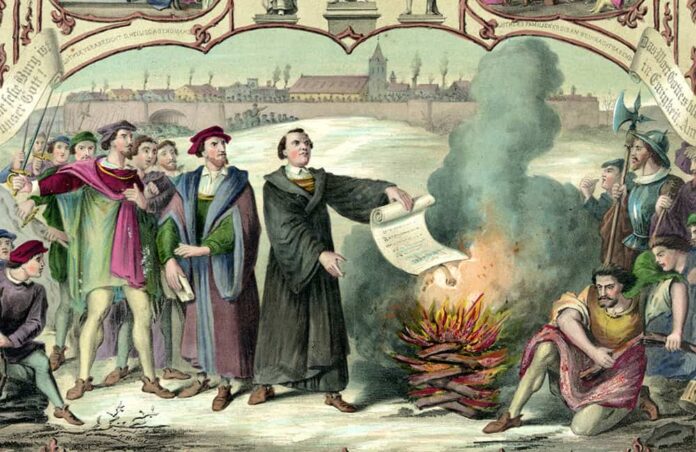 In my last review, I looked at a number of new books on Martin Luther and genuine reformers in the Catholic tradition. In light of the 500th anniversary of the Reformation on October 31st, I’d like to continue with related books, but this time focused on clearing up misunderstandings about the Reformation. In my last review, I mentioned that Eric Metaxas’ book, Martin Luther, conveyed some age-old myths about Catholicism and offered the works of Eamon Duffy as a strong counter. Duffy himself has a new scholarly book for the anniversary, drawing our attention to the drama of the Reformation in England. Although in great need of reform, Duffy counters that “we are far more aware now of the richness, resilience and social embedding of the late medieval religion so often caricatured or ignored in the older narratives.” Duffy focuses elsewhere on this earlier period, but in this work details how Catholics dealt with the Reformation.

This first section focuses on how St. Thomas More placed himself at the center of Henry VIII’s controversial attempt to deal with Protestant heresy before the king’s break with Rome. The next section, points to lesser known figures such as Cardinals Reginald Pole and William Allen. Allen devoted “his life to radicalising what he saw as a broad but dangerously unfocused Catholic survivalism into something more militant and ideologically committed,” organizing the efforts of priest to serve in Protestant England at the risk of their life. The final section, details the internal struggles and developments of Protestantism, especially with the rise of Puritanism. Overall, Duffy conveys the drama of the unfolding of the Reformation both within the Catholic Church and without, as Protestantism grew ever more dominant in England. Wiker provides a popular and accessible overview of twelve themes that unpack the historical dynamics that led to and enabled the Reformation. He makes no attempt to whitewash the real problems that existed in the Church, but explains that factors like the Papal States, the growing influence of atheism, the threat of Islam, the rise of nation states, and the printing press all played into the Reformation’s success. In the aftermath of the Reformation, he explains how those pushing secularism used historical scholarship to relativize the Bible and the Thirty Years War to discredit Christianity as violent, though it was largely a political dispute. Stark, a sociologist at Baylor, most directly attempts to debunk Reformation myths. First, he begins by noting that the periods both before and after the Reformation were marked by poor church attendance, despite Protestants attempts to force attendance by law. Rather, uniting church and crown led to more apathy and even antipathy among Catholics and Protestants. Though not a Catholic himself, Stark has routinely defended Catholicism from many historical fabrications (see his Bearing False Witness: Debunking Centuries of Anti-Catholic History), which in this work include the claims that Catholics impeded the rise of science and modern economics. He also notes that, despite claims to the contrary, Protestants did not respect freedom of conscience and engaged in religious persecution, and Luther himself was known for virulent anti-Semitism.

His most provocative claim may be that the Reformation was “especially good for the Catholic Church,” because the Church “actually thrives on Protestant competition and is far more successful and effective when forced to confront it.” In general, Stark thinks that pluralism, and the competition it brings, creates an environment in which religious practice thrives, versus state churches which are “lazy and ineffective.” Even within the United States, Stark found that states with lower Catholic populations tend to have higher Mass attendance and more active parishes. Likewise, he claims that the presence of Protestant missionaries in Latin America has led to a more energetic Church and even a “sunning awakening.” Ironically, he says “that the Catholic finally thrives in Latin America could be considered as partly a gift from Martin Luther.” Even if we’re not prepared to thank Luther, Stark helps us to think through God’s providence in guiding the Church even through painful divisions. Matthew Levering, Was the Reformation a Mistake? Why Catholic Doctrine Is Not Unbiblical (Zondervan, 2017).

The greatest surprise in all of these myth debunking narratives may come from Matthew Levering’s book, written in response to a question posed to him by a Protestant press: was the Reformation a mistake? He does not consider the Reformation be to be a mistake, both because reform was needed and Reformation traditions have born some good fruit, but he does hold that the Reformers were mistaken on central points of the faith. The surprise comes from the freshness of Levering’s approach, avoiding polemics by offering a biblically rooted approach to dialogue on key theological issues. The book debunks the myth that Catholic teaching does not have a biblical foundation.

The book itself consists in a dialogue, as each chapter begins with a critique of the Catholic position using Luther’s own words. Levering then follows not with a direct response to Luther’s concerns, but a rich and broad account of the biblical underpinnings of Catholic doctrine. Addressing doctrines such as Mary and the saints, the sacraments, purgatory, the papacy, and justification, he demonstrates that “the Catholic Church’s biblical reasoning has been formed over the centuries in the process of handing down the gospel, proclaiming it liturgically, preaching it, living it, and resolving doctrinal controversies” (187). Both Catholics and Protestants will be enriched by Levering’s “biblically warranted reasoning about biblical realities.”

Though there have been many misunderstandings on both sides the last five hundred years, the anniversary of the Reformation provides an opportunity to learn more about the history and theology of both traditions, as we work toward healing the wounds that divide Christians. Debunking commonly held myths provides a good start to this process.