Hero, villain, heretic, saint, reformer, corrupter, man of integrity, bombastic glutton. Which image of Luther should we believe? Because Luther primarily sought not to reform abuses in the Church but to reform the Church’s beliefs, Catholics cannot recognize him as a true reformer or a holy man. Nonetheless, it is widely agreed that Luther played a major role in shaping the modern world. With the 500th anniversary of the beginning of the Protestant movement he initiated approaching on October 31st, we have been given a number of new books to assess his legacy. 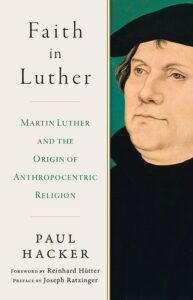 Hacker’s book provides an in-depth, theological analysis of the issue that stands at the heart of the Reformation: Luther’s teaching on salvation by faith alone. Pope Benedict’s preface tells us that the Reformation dispute fundamentally concerned Luther’s “turning away from the center of the Gospel” (xxii). Emmaus released a new edition of Hacker’s book for the anniversary this year. It was published originally in 1970 (in English translation), the fruit of Hacker’s own intense study of Luther’s teaching on faith that led him into the Catholic Church from German Lutheranism.

Catholics agree with Protestants that salvation comes only through faith. The key issue of dispute, which Hacker reveals, is Luther’s subjective emphasis of absolute, personal certainty, which cannot be undermined even by serious sin. Hacker describes Luther’s faith as reflexive, that is turned back on oneself, by emphasizing subjective experience and personal surety more than anything else. He describes how Luther differs from the Catholic position: “Faith is the way to, or the perquisite of, salvation, but Luther makes it coincide with salvation itself. This becomes possible because he has first identified salvation with the consciousness of being saved or the certitude of salvation, and then he equates this consciousness with faith” (71). Hacker shows us how this view of faith negated the Church’s authority, the sacraments, and even the need to love God. 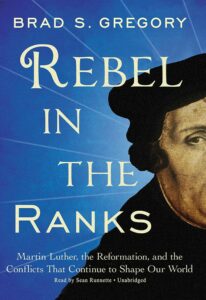 Brad Gregory, Rebel in the Ranks: Martin Luther, the Reformation, and the Conflicts that Continue to Shape Our World (HarperOne, 2017).

For those looking for a more general and accessible book, Brad Gregory gives us a broader narrative of how Luther’s troubled conscience exploded into the crisis that tore Christendom in two. The first section looks at Luther’s own story, tracing step by step his conflict with Church authority. The second section explains how Luther’s teaching spawned a multitude of new sects and divisions, all interpreting the Bible in their own fashion. Greggory explains: “What the early Reformation shows so clearly is that scripture and the Spirt can be interpreted and applied in radically divergent ways. Once the papacy and the Catholic Church are thrown off, there are no shared authorities to adjudicate disagreements” (137). The final section looks at how the Reformation set the tone for the development of a secular culture. Though not intending these consequences, Gregory argues that the Protestant Reformers “led indirectly to a profound diminishing of Christianity’s public influence in Western societies. The religious disagreements and conflicts that followed the Reformation set the stage for religion’s eventual separation from the rest of life” (2). 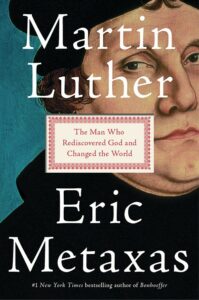 Metaxas, who wrote a monumental biography of Dietrich Bonhoeffer, provides us with a different perspective on Luther. His book seems poised to capture the largest audience for the anniversary this year. While I can’t agree with his view of Luther as a hero of faith, I can appreciate his presentation of a more sympathetic and thorough look at a man who has inspired many Protestant Christians. It is helpful to recognize why Luther is such an important figure for so many people. This book definitely provides many more details on the life of Luther (with over 450 pages). However, I would exercise caution, because it unfortunately also contains many gross misrepresentations of the state of the Church at the time of the Reformation.

For instance, even though Metaxas shows us many ways that Luther encountered the Bible in his early life, he still claims that the Bible and Church had no connection in the early 1500s and that “the study of the Bible per se was simply unheard of” (52). Luther himself was a theology professor and throughout the Middle Ages the Bible was the primary text for teaching theology. Brad Gregory makes clear in his book on Luther that there were even “twenty-two editions of the complete vernacular Bible . . . published in German . . . by 1518” (29). Metaxas presents a false picture of Catholics as ignorant, afraid to pray to Christ, and thinking they must earn their salvation through works. Good historical research could easily dispel these myths, such as the books of Eamon Duffy, but we see Protestants continue to project Luther’s own scruples (hating God and spending six hours in Confession, 47) onto the Church of his time. 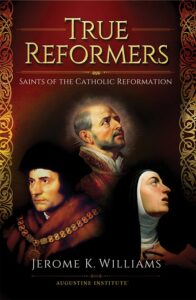 What could have Luther been if he had chosen faithful reform? The answer is a saint. There is no doubt that the Church was in need of serious reform in the 1500s. We have a number of great saints who show us that fidelity to God does not contradict fidelity to His Church. They stood against corruption and initiated deep and abiding reform. The Augustine Institute has release both a book and video series on true reformers, who boldly spoke out against abuses and led to a deeper realization of the truth found in the Bible, read in harmony with the Church. These figures—Teresa of Avila, Thomas More, Ignatius of Loyola, and Charles Borromeo, for instance—continue to inspire us to take up the task of genuine reform today.

COMING UP: Can this broken family heal? Archbishop Aquila to attend 500th commemoration of Reformation

This year marks the 500th anniversary of the Reformation; a time for Catholics to remember the event that splintered Christendom into thousands of denominations and a time to work toward the unity that Christ desired for all Christians . Pope Francis has made Christian unity one of his priorities and now Archbishop Samuel J. Aquila is making strides to push forward, if even just a little bit.

On March 19, Archbishop Aquila will co-preside over a prayer service alongside Lutheran Bishop James Gonia of the Rocky Mountain Synod to commemorate the 500th anniversary of the Reformation. The service will be held at Bethany Lutheran Church in Denver, marking an important milestone in local ecumenical relations between the Catholic and Lutheran churches.

Commemoration of a tragedy

Father Doug Grandon, parochial vicar of St. Vincent de Paul Parish in Denver, was both an evangelical and Episcopalian pastor before he entered the Catholic Church and became a priest. He noted there’s an important distinction between celebrating the Reformation and commemorating it.

“Unlike some Protestant churches, we don’t celebrate the Reformation but we remember it as a whole series of tragic events,” Father Grandon told the Denver Catholic. “A proper look in the rearview mirror acknowledges that the Catholic Church is responsible for a great deal of that tragedy.”

The Church was plagued with massive corruption in those times, Father Grandon pointed out. Martin Luther took issue with the sale of plenary indulgences, which in part prompted his famous 95 Theses, but there were other significant problems as well: scandalous popes, poorly trained priests, and bishops not living in their dioceses .

“That doesn’t justify all the breakaway movements, but we can understand how people could lose faith in the Church,” Father Grandon remarked.

“…We don’t celebrate the Reformation but we remember it as a whole series of tragic events.”

The Council of Trent, held between 1545 and 1563, began to implement a dramatic reformation of the Catholic Church that addressed many of these failed points. “It was too late to put the broken pieces back together,” Father Grandon lamented.

Today, the three most important divisions between the two churches lie in the issues of Papal authority, interpretation of Scripture and the nature of the Eucharist.

“Five hundred years later, we see this as a real tragedy,” said Father Grandon, “but we see the Holy Spirit working to give us hope once again that the Church could come back together. There have been fruitful dialogues between Lutheran representatives and Catholic leaders, and they have made various declarations about the tragedy of the 16th century.”

Though the churches still retain some points of contention and disagreement, much progress toward finding reconciliation has been made over the years. In 1999, the “Joint Declaration on the Doctrine of Justification” was signed by the Pontifical Council for Promoting Christian Unity and the Lutheran World Federation, a document which stated that the two churches share “a common understanding of our justification by God’s grace through faith in Christ.”

In 2015, Catholics and Lutherans once again acknowledged a path to unity through a joint declaration entitled “Declaration on the Way,” which outlined 32 important points where the two churches are in consensus.

“When we forget that our family is broken, we don’t see the need to want to reconcile it,” Powell said. “We do need to stand in solidarity with each other, and we need to acknowledge how this happened and how we can move forward because we are a broken family.”

Pope Francis and Archbishop Aquila are giving Catholics a “sorely needed example,” Powell said, of how to do that.

“When we forget that our family is broken, we don’t see the need to want to reconcile it. We do need to stand in solidarity with each other, and we need to acknowledge how this happened and how we can move forward because we are a broken family.”

“I think part of why Archbishop Aquila is doing this is he wants his flock to see their shepherd going and making an effort and being an example of trying to bring some level of reconciliation here,” Powell said. “We’re finding common ground, we’re not glossing over differences, but we’re actually standing in solidarity together, and that’s very, very good.”

It is also important, Powell added, that the Catholic Church reconcile with the Lutheran church in particular because all of the countless denominations of Christianity that exist today and were spawned by Luther’s split from the Catholic Church.

“It’s hard to bring reconciliation unless you can go back to the source of things,” Powell said. “The reason that we have so many thousands of [Christian] denominations, even in this country, is because of the split that happened with this particular group of people.”

A task of humility

If Catholics and Lutherans are to become unified once more, Father Grandon emphasized that dialogue must be engaged in with the “deepest kind of humility,” both individually and corporately.

“There is no room at all on the Catholic side for a kind of ‘Catholic triumphalism,’” he said. If we’re to experience progress in putting all of the various fragmented parts of the Christian church back together, there has to be immense humility on every side.”

Powell also stressed that when engaging in dialogue, “We have to be very honest about places of disagreement.” It also helps, he said, to build fellowship with people of different faiths, which allows for the freedom to disagree without it becoming a hostile argument.

At his Crucifixion, just before entering into his glory, Jesus Christ prayed to his Heavenly Father, “I pray for those who will believe in me […] that they may all be one […] that the world may believe that you sent me” (Jn 17:20-21). The commemoration of the Reformation is a chance for Christians to ask themselves: why are we not one?