The first martyrs of America 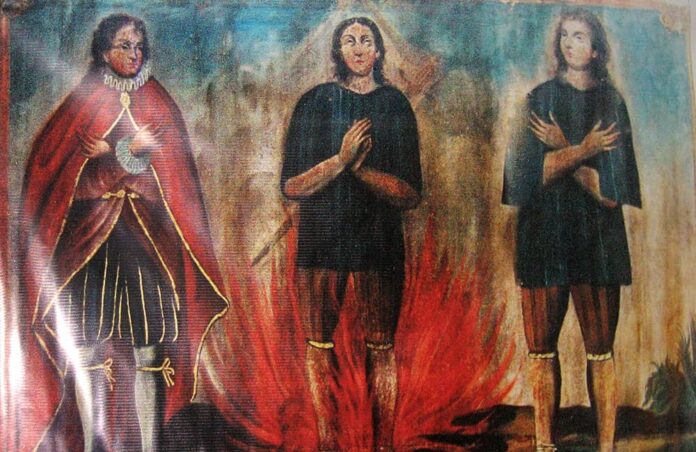 The recent canonization of Cristobal, Antonio, and Juan, officially declared the new saints as the first martyrs of the New World. The 12 and 13-year-old saints were murdered between the years 1526 and 1529 by the native indigenous people, enraged by the faith these kids had freely accepted, fruit of the missions of the Franciscan and Dominican friars in Tlaxcala, modern-day Mexico.

Pope Francis acknowledged the sanctity of these young heroes, allowing them to be celebrated by the universal Church.

Cristobalito, or little Cristobal, as he was known by the Franciscan missionaries, was the eldest son of Chief Acxotécatl, and his successor. He quickly learned about Christianity and the truths of the faith with much enthusiasm in school. “Cristobal was one of the first children to begin school. He was characterized by his nobility and goodness. He even asked to be baptized himself,” said Father Francisco Rodriguez, expert on the life of the three children and priest of the diocese of Tlaxcala, to Vatican Radio.

“We don’t know his name in the Nahuatl language,” added Father Rodriguez. “When he was baptized, he chose the name Cristobal, which means ‘Christ bearer,’ and from then on, promised to live up to his name.”

And so, he did. The young man would enthusiastically tell his father what he learned at school; and even persuaded him to worship the true God, leaving behind his idols, and to marry only one wife, turning back on his polygamous beliefs. Acxotécatl, however, dismissed his son’s words as mere “child’s talk”. Nevertheless, one of his wives urged him to kill Cristobal, lest he inherit the throne.

After a tribal party, the chief remained alone with his son, and, grabbing him by the hair, threw him to the ground and beat him so badly that he broke the child’s head and arms. As Cristobal was being tortured, he called on God in his native language: “Lord, my God, have mercy on me; if you wish me to die, may I die; if you wish me to live, deliver me from my cruel father.” Before dying, the young hero offered forgiveness to his father. Cristobal told him that although he wanted to inherit the kingdom, now he would inherit an even greater one. Yet, instead of being merciful to him, his father delivered him to die at the stake.

This act was a “great and heroic gesture of a true martyr, despite his young age; determined to declare: ‘even if it costs me my own life,’” said Father Rodriguez. Cristobal “died in his mother’s arms,” he added. “He told her that he had expressed to his father his wish of inheriting the kingdom, but that now he would inherit a more fascinating one.”

Antonio and Juan, loyal until death

The other two martyrs were great friends. Antonio was a noble in his indigenous tribe and Juan was his servant.

From their childhood, both attended Franciscan school together and volunteered as guides to the Dominican friars in their mission to evangelize the Americas. “When the superior of the convent saw their desire to become guides, he warned the kids of the dangers they would have to face – they accepted,” affirmed Father Rodriguez. Juan was beaten to death with clubs by a group of natives who saw him as a threat to their customs. Antonio, in an act of loyalty, ran to aid his servant and was killed in the act.

With such testimony, these kids have enriched the Catholic Canon of Saints, for “only someone who is in love is able give up his life,” said Father Cristobal Gaspariano, also an expert on the case of the three martyrs. “This was the case of the children martyrs of Tlaxcala,” he continued. “They were passionate for the Lord, to the point of offering up their lives for him. May the celebration of these blessed children lead us all to live out our Christian vocation with much love; so that, if it ever becomes necessary, we may also give up our lives with heroic generosity.”