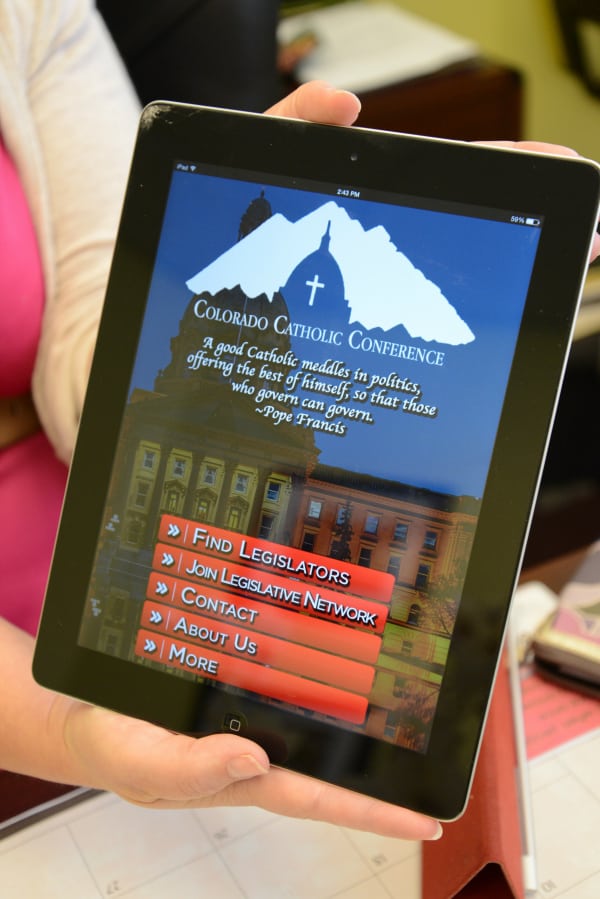 This is the final story in a series about archdiocesan ministries and programs funded by the Archbishop’s Catholic Appeal.

The Church’s lobbying arm in Colorado has gone mobile.

This month, the Colorado Catholic Conference launched an app for smartphones that provides faithful with another avenue to be connected to legislative activity in the state.

“This is just another way to communicate with people and let them know what’s going on, and get more people active and engaged in the public square,” said the conference’s executive director, Jenny Kraska.

The conference, which serves as the lobbying and public policy arm of the three Catholic dioceses in the state, is supported by the Archbishop’s Catholic Appeal (ACA).

Involvement in civic activity including voting and participating in the legislative process is a right and duty, she said.

“We’re lucky that the Colorado bishops take that as seriously as they do,” Kraska said. “In order to be a part of that we do need funding from ACA to be involved and be a constant presence.”

Kraska, an attorney from Minnesota, said she is the only full-time, faith-based advocate of issues at the state Capitol.

“When the Colorado Legislature is in session, I’m at the Capitol lobbying on behalf of issues that are important to the Catholic Church statewide—everything from the most foundational issue of life, marriage and religious liberty to other issues like immigration, Catholic schools, cemeteries and bingo,” she explained. “The Catholic Church touches on a lot of aspects of our lives whether we realize that or not.”

In the last legislative session, Kraska rallied against the abortion-rights Senate Bill 175 and organized a gathering of nearly 1,000 to join Denver’s Archbishop Samuel Aquila and Greek Orthodox Father Ambrose Omayas in praying for the protection of life outside the Capitol downtown. The bill was defeated.

“It’s one of those things I will never forget. Opportunities to defeat a piece of legislation that is that horrific come along maybe once or twice in a public policy career,” she said.

The conference also played a part in testifying and passing the bi-partisan wage theft bill, Senate Bill 5, which provided a process for handling accusations of missing payments.

“It was nice to be part of something both sides could come together on,” Kraska said.

The conference staff includes Kraska and the coordinator, Diane Chavez, who has worked there for more than 20 years. Kraska was also just elected president of the National Association of State Catholic Conference Directors. She is the first laywoman to take the leadership position that oversees 41 members across the United States.

In her role in Colorado, Kraska also oversaw the conference’s new soon-to-be-relaunched website. In September, the website will include access to all the activities of the conference and the state legislature as well as a “Get Out the Vote” guide that helps inform Catholics voting in the November elections. It will be made available in English, Spanish, Korean and Vietnamese.

Kraska said she hopes the new app and website will encourage more faithful to become involved in the political process.

“There’s simple little things that all of us can do and should be doing to engage the public square,” she said.