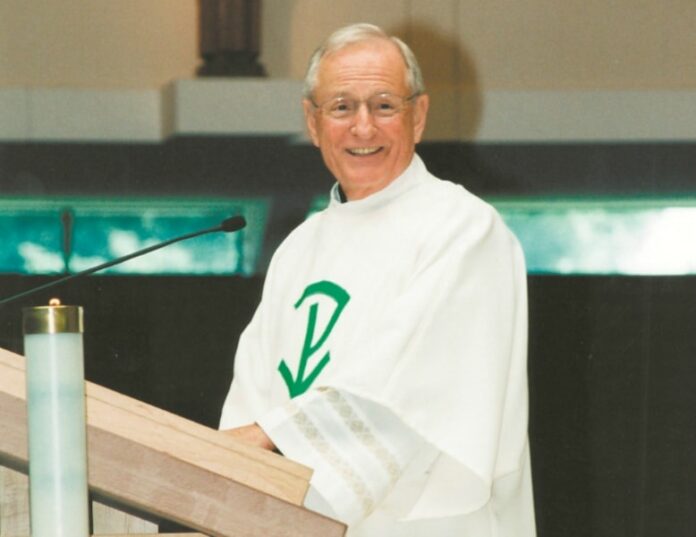 His seven children call him “the last man standing.”

Deacon Ron Ansay, 82, is the lone living member of the first class of deacons ordained in the Archdiocese of Denver. That historic ordination took place April 6, 1974, in the Cathedral Basilica of the Immaculate Conception. Ordaining prelate was Archbishop James Casey.

He describes his vocation as “a true call from God.”

“I felt deep within my heart that God had called me to be a foundation builder for a new ministry within our Church,” Deacon Ansay said of the diaconate, which had been established as a rank of holy orders in the early Church but over time became a transitional step for men becoming priests before it was restored as a permanent clergy rank by the Second Vatican Council.

Born in Milwaukee, Wis., on Aug. 10, Deacon Ansay’s birthdate seems prophetic—it’s the feast of St. Lawrence the Deacon, who is been a beloved patron.

He entered diaconal formation at the invitation of his good friend, then-Father, now Bishop Emeritus Richard Hanifen of Colorado Springs.

“I (initially) hesitated as I had seven small children at home, the oldest only 9, plus a struggling interior design business from which I was taking much time in my lay ministry,” Deacon Ansay said of his and his wife’s time spent ministering to Hispanic farm workers.

They prayed and said yes. Even so, the ministry was a sacrifice. Dolly, his wife of 59 years, was often in the pews alone while he was on the altar assisting at Mass, conferring baptism or leading a prayer liturgy. And he suffered rejection from some within in the Church who didn’t understand what a deacon was or did.

“The ministry was so new, many were unsure about it or just what the purpose of it was,” Deacon Ansay recalled. “Today as I reflect back over those 40 years, my heart is filled with great joy and gratitude as it has become an extremely valuable and needed ministry in our Church.”

His parish assignments included St. Catherine of Siena, Holy Family, and Risen Christ, all in Denver, St. Thomas More in Centennial and St. Mary in Aspen. He also ministered at St. Benedict Trappist Monastery in Snowmass and Sacred Heart Jesuit Retreat House in Sedalia. For many years, he and Dolly also helped with spiritual formation for deacon candidates and their wives.

Now officially retired from active ministry and living with Dolly at Heather Gardens in Aurora, he assists at Mass there. He also remains active as a realtor.

“I have given well over 40 retreats … baptized over 410, married hundreds and, of course, helped bury the dead,” he calculated. “I have married my seven children and baptized almost all of our 50 grand- and great-grandchildren.”

Deacon Ansay noted that he and Dolly could have said no to God’s call and God would have continued loving them.

“But we would have cut off all the beauty (diaconal) ministry and helping others has brought us,” he said.