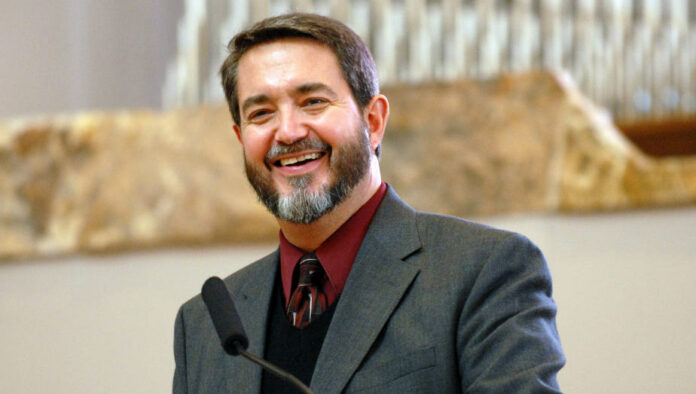 Hahn has made a career out of giving Catholics the kind of education that will help them love their faith. He first made waves in the Catholic world with engrossing testimony Rome Sweet Home. Since then, he has published dozens books and his talks are available through a variety of Catholic media groups, including Lighthouse. He is a Theology professor at the Franciscan University of Steubenville, along with holding positions at multiple seminaries.

Luckily for us, Hahn agreed to come to Denver and speak at the final Archbishop’s Lecture Series event of the year on May 9 at 7 p.m.. His topic will be “The Father of Mercies: Understanding the Relationship Between Mercy and Justice”. The talk will be at the John Paul II Center for the New Evangelization.

Hahn said he is happy to help the faithful of the diocese understand their faith. He said that these kinds of catechesis are what will bring starving souls back to the Church.

“This archdiocese recognizes that this is a famine, and they’re doing something to feed the hungry multitude. The rest of the Church in this country should pay attention,” he said.

Hahn agreed to answer some questions before the talk. Here’s what he had to say:

Q: Can you tell us a little bit about your background as an apologist?

A: I don’t think of myself as an apologist. I’m primarily a teacher, a professor of theology and scripture, and also an author. I explain and defend the faith because that’s what every Catholic is supposed to do. But my primary work isn’t defensive. As Catholics we have a positive, compelling, biblical vision of life. It promises us fulfillment in this life and heaven ever after. It safeguards our relations in the family, the neighborhood, and society. When I was young I was ordained to the Protestant ministry. I had no use for the Catholic Church. But the more I tried to live by the Bible, the more Catholic my life became. It’s been 30 years now since I was received into full communion. I’m grateful for what God has given me, and I’d be a cad if I didn’t want the world to share in it.

Q: You mentioned in your talk description that God’s fatherhood is the single most revolutionary concept of the faith, and that many people take this for granted. Can you expand on that?

A: Most people take God’s fatherhood as a given — something self-evident and even cliché. But to call God “Father” is considered blasphemy in Islam, for example, as it was by the Jews of Jesus’ time. We’re told that in the Gospel (John 5:18) that this was the very reason Jesus’ opponents wanted to kill him: because he called God “Father.” It’s a revolutionary idea. The people who oppose Christianity know this. Yet we take it for granted, and so we miss the core message of our religion — the very truth for which the martyrs were willing to die.

Q: What part did mercy play in your own conversion?

A: St. Thomas Aquinas said that mercy is the quality most characteristic of our God. So mercy plays a predominant role in every conversion. Nobody deserves the graces God gives us. I opposed his Church, and yet God drew me into it anyway. What a gift! What a mercy! He has lavished his sacraments on me for three decades. It’s all unmerited. And that’s not just the case for me, or just the case for converts, but even for the greatest saints.

Q: Why do you think it is important for Catholics to understand both justice and mercy?

A: Because God’s nature demands both, and because our nature demands both. We all want to live in a world that’s just. And we all want to experience mercy when we ourselves fail to live justly. We tend to think of justice only in terms of punishment, but we have to remember that punishment — when it’s truly just — is remedial, medicinal. It restores us. God’s mercy and his justice can be distinguished, but not separated. They’re two aspects of the same loving action, the same benevolent providence. Indeed, the cross shows us the mystery of how both mercy and justice are married, as it were: Christ’s self-offering to the Father on our behalf is a demonstration of perfect justice, at the same time it is a gift to us of God’s pure mercy.

Q: Do you have additional resources you would recommend to people who want to learn more about God as father?

A: If you can wait a month, read my book titled The Creed: Professing the Faith Through the Ages. It’s coming out from Emmaus Road Press. If you just can’t wait, I’d recommend taking a look at two of my books, A Father Who Keeps His Promises: God’s Covenant Love in Scripture and Understanding ‘Our Father’: Reflections on the Lord’s Prayer, both of which I wrote several years ago.

Q: One of the purposes of this lecture series is to provide intellectual formation for the archdiocese. Can you speak into why that is important?

A: We’re made to share the divine nature (2 Peter 1:4). We’re told we should have the “mind of Christ” (1 Corinthians 2:16). To have a mind — an intellect and will — is already to reflect God’s image. But a mind can be corrupted or wasted. It’s a disappointing fact that many Catholics — men and women who have received extraordinary professional education — are practically illiterate in the faith, which is really the most important dimension of their lives. Poorly educated Catholics soon become ex-Catholics. We’ve seen this reflected in the decline in Mass attendance, the disuse of Confession, the indifference of a generation (and more) to the rites of a Christian wedding or the demands of Christian marriage. This archdiocese recognizes that this is a famine, and they’re doing something to feed the hungry multitude. The rest of the Church in this country should pay attention.