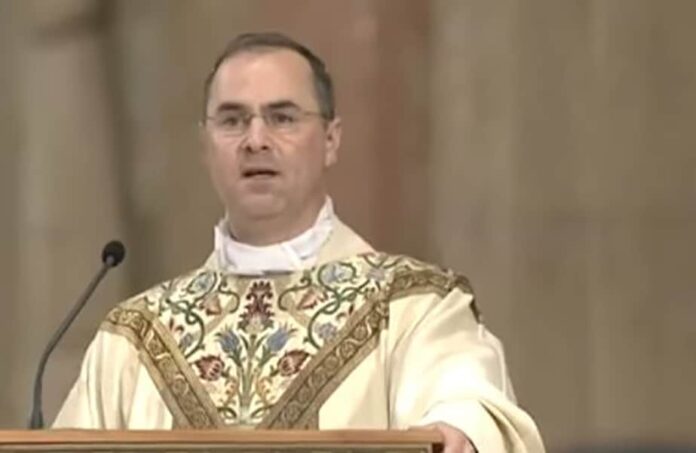 Father Paul Scalia made national headlines in 2016 when he delivered the homily at his father’s funeral. Instead of eulogizing the late Supreme Court Justice Antonin Scalia (1936-2016) for his rich legacy and great legal mind, the diocesan priest of Arlington, Virginia, spoke on the person of Jesus Christ, a move Father Scalia describes as simply doing his job as a Catholic priest.

This month, Father Scalia will visit Denver as the last speaker of the 2016/17 Archbishop’s Lecture Series. He will deliver a talked titled “The Word of the Lord Came to Me,” which seeks to consider “the increasing importance of prophetic Catholic witness in the culture today.”

This event is sold out. Watch it LIVE on Denver Catholic’s Facebook page (March 21, 7pm).

Ordained in 1996, Father Scalia has served in various parishes, and is currently the vicar for clergy. He founded the Arlington Diocese chapter of Courage and serves also as Chairman of the Board of Directors for Courage, International.

In this interview with Denver Catholic, Father Scalia offers, among other things, a glimpse into what dinner was like at the Scalia home, where you needed to watch your grammar; how his mother, Maureen Scalia, held the Supreme Court Justice accountable for taking out the trash; the road that led him to the priesthood; as well as the importance of Courage, a ministry that helps those with same-sex attraction live out Church teaching.

Here are some of the best excerpts.

First, I like to think of it in terms of “the Church made headlines,” because if a priest preaches well it’s because people are interceding for him and because he has the grace of Our Lord through the Church. And I was very conscious of the fact that the Mass is the Church at prayer, and that’s where we are most ourselves, so it’s a tribute to the mystical body of Christ more than to me.

In a lot of ways there was nothing remarkable about the homily. … A funeral homily in the Catholic Church should never be a eulogy, it should always point to Our Lord, and a lot of the things that I touched on, I would have touched on at any funeral homily. Obviously, it had a lot more meaning and significance because I was speaking of my own father, and I could speak from that depth.

When I got home from the funeral I checked my email and a friend of mine sent me an email and he said, “Remember, you were just doing your job.” And that is exactly right.

Archbishop Chaput wrote me shortly after my father’s death and he said, in my experience, a great man is not a great man alone, but it’s because he has a family. And my dad could not have been the kind of man he was without my mom. That’s an impossibility, and he knew that. And he would grouse and grumble at times if she held him accountable for certain things, like taking out the trash, but he knew that she was such a great source of support for him.

On family dinner, and grammar

My dad said once to someone in a Q and A, “you gotta be home for dinner.” That’s the key to the family. Dinner is where they are civilized, meaning, where they get civilized. And so, the dinner table was really a great place where we would come together. And there was plenty of grammatical correction there. And mom, and dad, were not shy about correcting us and teaching us. But then also there was conversation on philosophy, theology, and all of these different things we would discuss, and sometimes [we would] just goof off.

My brother recounts a time when he was asking my dad permission for something, and he used the old line, “well, everyone else is doing it.” And my dad looked at him in puzzlement and asked him, “why would you want to be like everyone else?” In other words, you have to be who you are.

And [they taught] integrity about the faith. My parents made some serious sacrifices to make sure that at the very least we were going to a parish that was theologically sound and liturgically beautiful, or at least reverent. Raising kids in the 60s, 70s and 80s, these were some of the most confused and confusing times in the Church’s history, and in more than one place where we lived, my parents would bring us on a considerable drive to find a church that was doctrinally sound and liturgically reverent. And that sent a message, that certainly sent a message to us that this is something worth making a sacrifice for. And this is who we are.

On the road to the priesthood

At the same time, I was coming to a greater realization, in getting to know more people on campus, how the problems, the struggles that people have interiorly are always best answered and only fully answered by Catholic doctrine and sacraments.

It was a blend of things, so that by the time I sat down and wrote my essay to apply to the seminary, it all lined up very nicely, all these various influences in my life that had led me to this, to this vocation, in which I am commissioned to articulate the faith that nourishes people, that saves souls, and to administer the sacraments, which alone are the ways that we find peace.

On the final decision

One summer I interned on Capitol Hill at the Heritage Foundation, it was a great summer. And that was the summer that I finally decided to enter the seminary and spoke with a vocations director. And a lot of it came about because I realized over the course of that summer that we could propose a lot of legislation, we could advocate for this that or the other, but if we wanted to change people, to affect people for the better, well, only the priest can go that deep. Only the priest can go into the soul and make the change that needs to be made.

On becoming a diocesan priest

On the work of Courage

The apostolate of Courage is articulating in a charitable way what the Church teaches, and not only that, but establishing places, and groups, where people can go and find the Church’s assistance, and find the accompaniment that Pope Francis talks about. It’s such a great word that he uses there [accompaniment], because that is exactly what our Courage chapters do, they accompany people to help them live chastity. … It’s not enough to have a clear teaching, we must have those means of assisting people to live it, and that’s what Courage is all about, it’s giving a clear teaching, but also giving the means to live it.

What I would like to do in the talk is speak about what it means to be a prophetic witness in light of the prophets, and what do we learn from them, and what do they have to teach us.

The institutional dimension of the Church is simply not going to have as much presence in the world. The days of the Catholic Church building enormous hospitals and schools and universities and orphanages, those are over. We just aren’t doing that anymore. And the temptation is to look back and say gosh, now what do we do, right? But the fact of the matter is, our greatest strength is in being prophetic witnesses, and you don’t need an institution to do that.