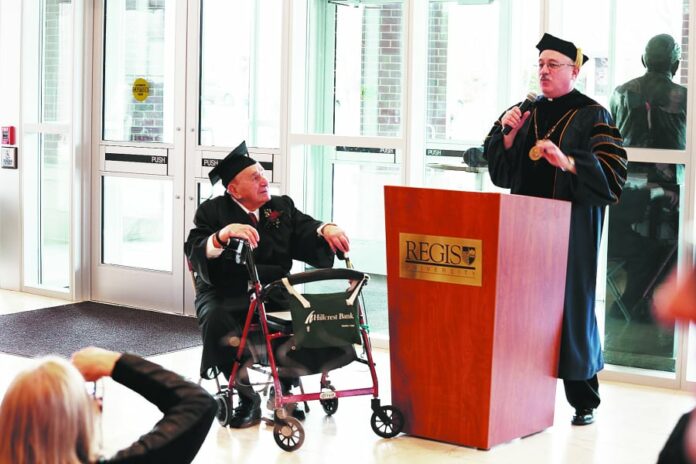 During a commencement ceremony Dec. 21, Sidney Shafner, who is Jewish, received a degree from president Jesuit Father John P. Fitzgibbons more than 70 years after he attended the Denver university.

“Sidney deserves this degree—he’s anything but average” said Nathan Matlock, associate director of the university’s Center for the Study of War Experience.

Shafner said he was anticipating the ceremony when the Denver Catholic Register interviewed him at his home in Aurora Dec. 18.

Shafner first came onto the Regis campus in 1943 as part of an elite group of American men selected for the Army Specialized Training Corps. He poured hours into his studies, lab work and also military training.

“I took it very seriously,” Shafner said when he was a student at 22 years old. “I didn’t want to be sent to the infantry.”

But the war changed that when the military decided Shafner and fellow soldiers were needed in Europe to help the war effort. He became a soldier in the 42nd Infantry Rainbow Division, one of two units credited with liberating the Dachau concentration camp in April 1945.

Along the way from Nuremberg, Germany, the soldiers were ambushed and shot at by planes overhead. Shafner’s heroic response of calling for backup earned him two bronze stars, he said.

“With God’s help they stopped firing on us,” he said as the troops took cover under their military vehicles.

The soldiers were not prepared for what they saw in Dachau, Shafner said.

The people were inmates at the concentration camp, as two young boys along the road had informed the soldiers. They entered the camp and freed the prisoners.

“I’ll never forget it,” he said. “It’s an example of man’s inhumanity to man.”

Shafner said the two boys, who were sent to the camps to work as laborers after their families were killed at Auschwitz, were offered food and clothing. They became their cooks and stayed with the infantry until the war ended.

“These kids remained with us for a whole year,” Shafner said. “They were like a part of our infantry.”

He befriended the two boys with whom he spoke German, and has remained in touch with one, Marcel Levy, ever since that historic day.

“Every two weeks he emails me,” Shafner said of his friend who lives outside Tel Aviv, Israel. “We’re very close.”

Shafner returned to Denver and married his wife of 68 years, Esther. They had three children together. Today they have seven grandchildren and two great-grandchildren.

Although Shafner never completed his engineering degree at Regis, he said he is grateful for the time he spent on the campus. He was joined at the ceremony at Regis by his family.