His Church. Our Experience.
Subscribe
HomeOn MissionFocusHearts and hands of nuns, laity take Christ’s love to the poor
On MissionFocusLocal

Hearts and hands of nuns, laity take Christ’s love to the poor 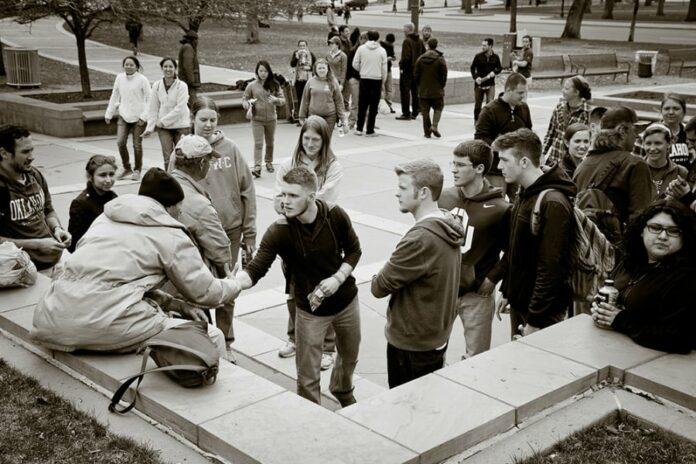 Their Denver ministries are different but they share a common theme: they all serve the poor.

With the help of lay staff, nine Little Sisters of the Poor nuns lovingly care for needy seniors at Mullen Home in West Highlands, while 25 young adult Christ in the City missionaries serve the chronically homeless downtown, and 115 college students from Regis University’s Father Woody Programs serve inner-city youth, the homeless and the elderly.

Members of the three apostolates shared their stories with 150 guests at a second annual jointly sponsored get-acquainted dinner Sept. 22 at Mullen Home.

“This is a friend-raiser, not a fundraiser,” Little Sister Patricia Mary Metzgar, superior of Mullen Home, told attendees. “It’s to make people more aware of what is going on in our city and the beautiful things you might not hear about.

The Little Sisters were started by St. Jeanne Jugan in 1839 when she took in a blind, infirm elderly woman and began caring for her in her home in Saint-Servan, France. Today, some 2,500 Little Sisters serve 13,000 elderly residents in 195 homes worldwide, 30 of which are in the United States.

Next year, Mullen Home, which has 65 residents who the nuns support in the manner of their foundress by relying on Providence and begging, will mark its 100th anniversary.

Taking Christ’s love to the homeless is the ministry of Christ in the City, which was founded in Denver in 2010 to form lifelong missionaries. Young adults commit to a summer or a year of living in community to serve in exchange for spiritual, intellectual, apostolic and human formation through the program run by the Christian Life Movement. Missionaries search out the chronically homeless, befriend them, help connect them to resources and feed them.

“This last year has been the hardest of my life but the most beautiful and one of the happiest because it has been such an adventure falling in love with God and sharing that love with our (homeless) friends,” missionary Adriana Aguirre, 19, told the crowd. “I see everything is worth it: all the sacrifice and leaving my home in Sonora, Mexico. Being here and suffering with (the homeless) and sharing their life makes me feel so happy.”

Miriam Hernandez, 23, program assistant for Father Woody Programs, spoke about the service Regis college students do during the academic year (a handful also serve during the summer), which ranges from tutoring at Catholic schools, to helping Christ in the City and other entities to feed the homeless, to assisting with the elderly at Mullen Home, to co-sponsoring a huge annual Christmas party replete with dinner and gifts for thousands of homeless and poor.

Named after Msgr. Charles B. Woodrich who died 25 years ago and was co-founder of Samaritan House homeless shelter, Father Woody Programs was started by Regis professor Victoria McCabe after his death.

“We try to continue (Father Woody’s) mission,” Hernandez said. Quoting one of the key values of the Jesuit university, she added, “We are men and women for others.”

All photos courtesy of Abby Dellasega