His Church. Our Experience.
Subscribe
HomeLocalRelic of the True Holy Cross on display for veneration
Local

Relic of the True Holy Cross on display for veneration 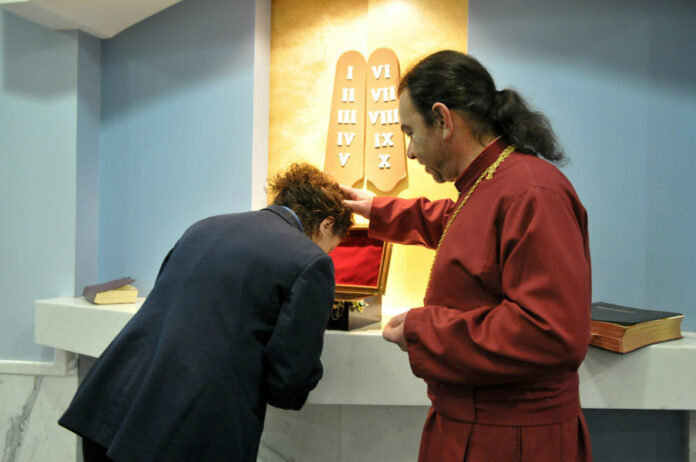 A relic of the True Holy Cross will be available for veneration at the Eastern Orthodox Church of the Resurrection in northwest Denver, starting Christmas Eve and running through the month of January.

The relic is recognized by the Eastern Orthodox Church as an authentic piece of the True Holy Cross, according to Eastern Orthodox Archbishop Alexander of Resurrection Church. It is a fragment from the one preserved in Rome at the Catholic Basilica of Santa Croce and was given to the Orthodox Church in the 18th century in the name of Pope Clement XIII.

“For some people in Denver, to go to Jerusalem or to Rome to see (relics of) the True Holy Cross may not be possible,” said Archbishop Alexander, “but to go just 10 minutes from their home may be!”

Relics of St. Gregory the Great, pope from 590-604; St.  Apollinarios, first bishop of Ravenna, Italy; and of the stone that closed Jesus’ tomb will also be on display. The relics were brought to Denver by Archbishop Alexander on Dec. 16.

The opening exhibit of the relics is set for 11 p.m.  Dec. 24 for the Christmas Eve Divine Liturgy (Eastern-rite Eucharistic celebration) at the church. After Christmas and through the month of January, the relics will also be on display at the church from 10 a.m.–noon and from 4 p.m.-6 p.m. on Wednesdays and Saturdays, and from 10 a.m.-noon at the Sunday Divine Liturgies. All are invited to venerate them.

“The relics are not only for my church, they are for all Christians to enjoy,” Archbishop Alexander said.

Church of the Resurrection is located at 4190 Xavier St. Questions: email eocaoffice@gmail.com.

Author’s note: Although Eastern Orthodox and Catholics accept each other’s sacraments as valid, canon law states that Catholics should not receive Communion at an Orthodox Church except when it is “physically or morally” impossible over a long period of time to receive at their own Church.