His Church. Our Experience.
Subscribe
HomeLocalEventsVIDEO: Add storytelling to your evangelization toolbox
LocalEventsQ&A 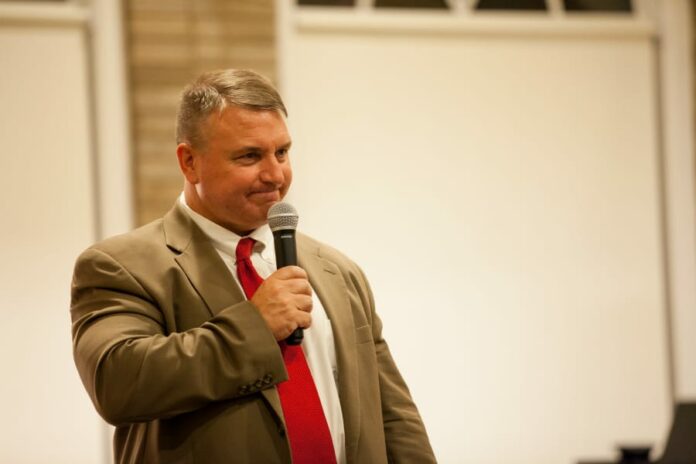 Catholics looking for new ways to evangelize might want to reconsider an old method used and sanctified by God himself—story and lyric.

This was the message of prolific Catholic writer Joseph Pearce, who visited Denver in September to deliver the first talk of the 2015-16 Archbishop’s Lecture Series. Over 300 people gathered in St. John Vianney Theological Seminary’s refectory to hear the author’s talk titled “Truth, Goodness and Beauty: Avenues for the New Evangelization.”

Pearce, a native of England who directs Aquinas College’s Center for Faith and Culture in Nashville, Tenn., and is executive director of Catholic Courses, told Denver Catholic that not everyone is ready for, or open to a theological discussion.

“If someone is not used to reading deep theology, a good way to start is with story,” Pearce said. “Let’s remember that story has been sanctioned and sanctified by Jesus Christ. He basically tells two stories. He tells the most important story of his life—his life, death and resurrection. And within that story he tells other stories, in parables.”

He offered Mel Gibson’s Passion of the Christ as an example of evangelization through powerful storytelling. After seeing the film, Pearce said he happened to tune into a Protestant talk radio station that was hosting a discussion of Gibson’s movie. One commentator, he said, noted that he had never realized the importance of Mary in Christ’s passion until he saw the film.

“And I was thinking,” Pearce reflected, “that Catholic apologists have been trying to point this out to these people for 400 years without success, and Mel Gibson produces a work of art, which is effectively a moving icon of the Stations of the Cross … which shows the relationship between Jesus and his mother, and all of a sudden a light switches on. And I think that is a perfect example of how a work of beauty, a work of art, of creativity, is far more powerful in reaching people than plain theology.”

Stories that he recommends includes the Chronicles of Narnia by C.S. Lewis, Brideshead Revisted by Evelyn Waugh and The Lord of the Rings by J.R.R. Tolkien. He also suggested reading Walker Percy, who Pearce says addresses “the angst and anxiety of trying to live as a Christian in a post-modern world which has lost sight of goodness, truth and beauty.”

Pearce has written extensively on Christian literary figures and lectured on the Catholic underpinnings of bestselling books such as The Lord of the Rings and The Hobbit.

Once an agnostic and political rebel, Pearce said the works of G.K. Chesterton led him down a path of conversion and eventual entry into the Church in 1989.

And even though he lives in a “non-poetic age,” Pearce recommends reading poetry, which he says “serves the same purpose as prayer.”

“Poetry, like prayer, forces us to stop, and slow down,” he said. “You can’t read poetry at speed. In this day and age, when we are full of distractions, we need to find space where we slow down and contemplate.”

Is this a special time for beauty?

When speaking of beauty, Pearce is quick to point out that beauty is “part of this mystic transcendental unity with the good and the true,” and that “true beauty always leads back to goodness and truth.”

“They are inseparable,” he added, “and they are ultimately in a deeper sense, united.”

However, he admits that beauty has a particular role in the current cultural landscape given that the concepts of truth and goodness have been “warped and distorted.”

“In the age of relativism,” he said, “the very meaning of the word love has been inverted narcissistically. Because love in a Christian sense of the word is to lay down our lives for the beloved, lay down our lives for the other. In other words, love cannot be separated from sacrifice. But in the world in which we live, the very word and meaning of love has been distorted and warped and really it’s about me and my feelings, and not about me having to lay down my life for my beloved.”

“The problem with relativism, of course, is that it doesn’t accept that there is an objective reality beyond ourselves,” he continued. “It’s all about ultimately a construct of our own opinions or prejudices, so it’s very difficult to talk about truth.

“Beauty can still speak,” he added, “whereas the discussion of love and reason has been warped and distorted by the culture of relativism and the culture of death in which we find ourselves.”

This Archbishop’s Lecture Series provides the faith community with a social and intellectual forum featuring well-known Catholic leaders lecturing on current topics. The events begin at 7 p.m. in the St. John Vianney Seminary refectory, 1300 S. Steele St., with a half hour of socializing with drinks and appetizers before an hour lecture and Q-and-A with the speaker.

Nov. 3—Jonathan Reyes, executive director of the USCCB Department of Justice, Peace and Human Development
Feb. 23—Mother Agnes Donovan, S.V., the first superior general of the Sisters of Life
May 9—Scott Hahn, Catholic theologian, author and professor at the Franciscan University of Steubenville