His Church. Our Experience.
Subscribe
HomeLocalEventsFriendship and a shared mission
LocalEvents

Friendship and a shared mission 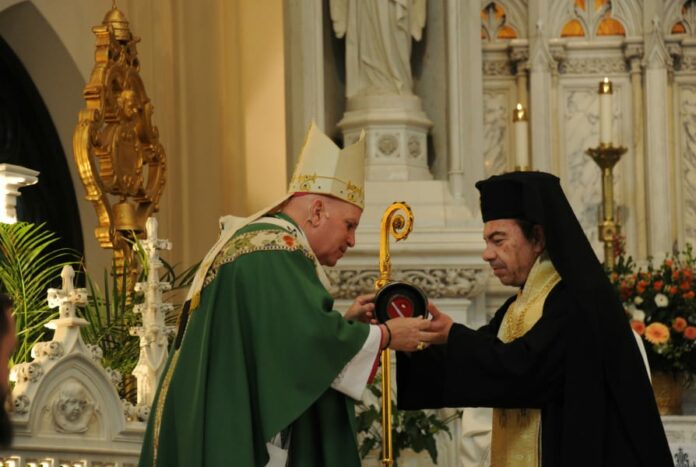 Days before the feast of St. Gregory the Great, two bishops representing Eastern and Western Christianity expressed their friendship in two separate liturgies and acts of gift-giving.

The encounter began months back when Orthodox Metropolitan Archbishop Alexander contacted Archbishop Samuel J. Aquila of Denver saying he wished to give him a first class relic of St. Gregory the Great, known in Eastern Christianity as St. Gregory the Dialogist. The gift was a sign of his personal desire for friendship with the Roman Catholic Archbishop.

St. Gregory the Great was Pope from 590 to his death in 604, and is considered a saint in the Catholic Church, Eastern Orthodox Church, Anglican Communion and some Lutheran churches. He is a Doctor of the Church and is also considered an Early Church Father. His feast day is Sept. 3.

Archbishop Alexander presented the relic and an icon of St. Gregory the Great to Archbishop Aquila during an Orthodox Divine Liturgy Sunday, Aug. 30. The liturgy was at the Orthodox Cathedral of the Resurrection in Denver. Both Orthodox and Roman Catholics attended the liturgy.

During his homily, Archbishop Alexander asked the faithful to ponder the meaning of holiness.

“Man becomes holy by the participation of God,” he said. “Anyone has the possibility to be transcended if he lives in holiness.”

The Orthodox Archbishop recommended making a new start in holiness each day, with “new resolution, with enthusiasm and with love, prayer and silence.”

He then presented the relic to Archbishop Aquila.

After the liturgy, the clergy and faithful met in the cathedral’s gathering room for a reception.

At 12:30 p.m., Archbishop Aquila celebrated Mass in the Cathedral Basilica of the Immaculate Conception, during which he received the relic and the icon.

“I extend my appreciation for this gift that shows we are brothers in Christ, and united in Christ,” Archbishop Aquila said. “I pray that the Lord will continue to strengthen and bless our fraternal ties.”

He then presented the Orthodox Archbishop with a statue of Our Lady, known in the Orthodox Church as “Theotokos” (loosely translated to mean “God-bearer”).

“I pray for her intercession for you and your community,” Archbishop Aquila said.

Archbishop Alexander was not representing the entirety of the Ukrainian Orthodox Church, but rather was demonstrating his own personal desire for friendship. Archbishop Aquila accepted, saying they shared a mission in bringing Christ to the people of Denver.

“I pray that our bonds will continue to grow,” he told Archbishop Alexander.

After the Mass, the faithful were invited to venerate the relic.