Pauline Meert and Irene O’Brien were both working on their Master’s degrees on separate continents with little financial security when they decided it was the perfect time to open a school.

Although they laugh at the circumstances now, the women’s trust in God at the time helped them follow that call despite of the chaos of life.

“We decided there was no clear path,” said O’Brien. “But we also felt a lot of peace with that. If we just said ‘Yes,’ the doors kept opening. Things would just unfold the way they were supposed to.”

The women had dreamed for years of starting their own Montessori school, and the journey toward it was filled with uncertainties, but the bumps along the way always seemed to work themselves out.

Their dream became a reality in February when Sophia Montessori Academy opened its doors in Denver. The school now has 28 students ages three to six. Meert and O’Brien are the main teachers and have help from assistant teachers Emma Hecker and Teresa Warhola.

The school’s classroom is bustling with hands-on activities that embody the Montessori approach of learning crafted by Maria Montessori.

“What Doctor Montessori did is bring the curriculum to life and make it accessible to the growth and development of the child,” said O’Brien.

The school incorporates the Byzantine Catholic faith, which goes hand-in-hand with the Montessori education, said Meert.

“One of the things that’s not often known is that Montessori herself was Catholic,” she said. “Her work was very Catholic in its understanding of the human person, through learning how God made us to be, and what works best at what ages.”

The classroom at Sophia Montessori caters to its students through its small furniture, tangible materials, one-on-one lessons, and freedom to explore within the boundaries of the classroom.

“At this age, children need to be involved,” said Meert. “They want to know about their world.” 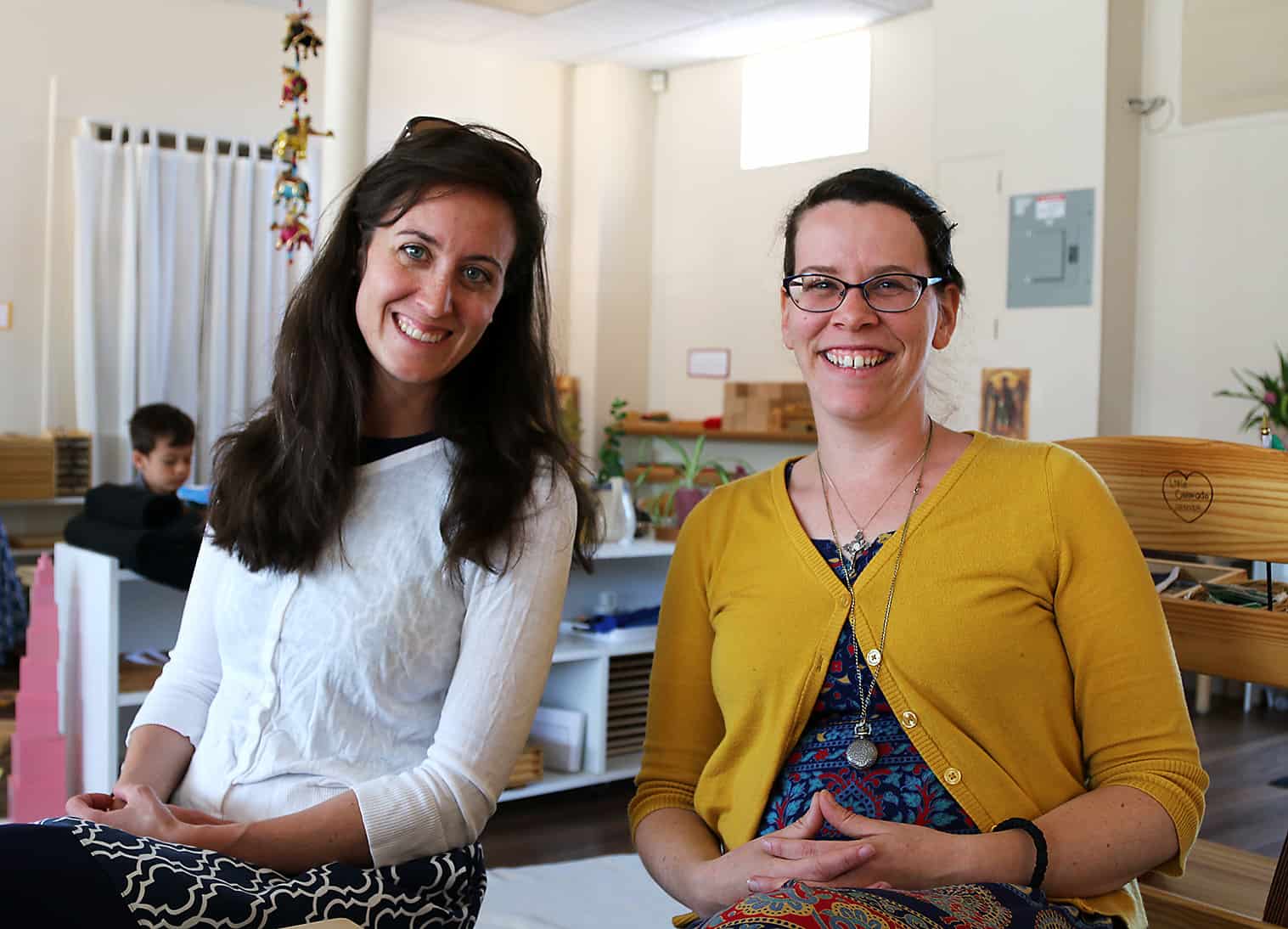 Denver, CO, May 10 2018: Sophia Montessori Academy was started by Pauline Meert and Irene O’Brien. The school opened its doors in February. (Photo by Moira Cullings)

Offering the children less structure and more freedom within the classroom is one way to incorporate Catholic teaching, said Meert.

“The children know what the boundaries are, and they have freedom within that,” said Meert. “It’s a true understanding of the freedom God gives us.”

O’Brien explained that students at Sophia Montessori can accomplish learning tasks such as counting to 1,000 because they learn in a way that makes sense to them.

“If they have this foundation of numbers and number patterns, when they’re in first grade it’s going to be a lot easier for me to introduce algebra as a system that’s fun, enjoyable and accessible,” said O’Brien.

“That’s what Montessori is — understanding the child’s needs and then the education is tailored to the child’s learning abilities,” she said.

Through that tailoring, the women have discovered that the children find more joy in learning.

“They have a certain self-confidence and desire to learn more because they have this foundation,” said O’Brien.

Meert and O’Brien hope their students take that joy with them throughout their education.

“We want to be able to see education always be joyful and productive and to really have that love of learning continue on,” said Meert.

To celebrate the families who helped open Sophia Montessori and to raise funds for the school’s future, the teachers are hosting a gala on June 2 from 6:30-9:30 p.m. at the Curtis Ballroom at Landmark in Greenwood Village.

“[We want to] celebrate the families who did so much to really get this started,” said O’Brien. “Our other goal for the fundraiser is to start building up the funds so that we can offer tuition assistance and so we can finish paying off the costs of renovation.”

Anyone interested in the mission and vision of Sophia Montessori is invited to attend.

The women have high hopes for Sophia Montessori’s future and look forward to where the journey will lead them.

“The dream is huge,” said Meert. “This is just one step. We’re just rejoicing in that.”

To register for the gala, visit sophiamontessori.com/gala18.