During his homily at the May 19 priest ordination, Archbishop Samuel J. Aquila told the five new priests that Jesus is asking them again: “Do you love me?” The archbishop referred to the Gospel in which the risen Jesus asks Peter three times if he loves him, as a reparation for the three times he denied it before being crucified.

The ordination took place at the Cathedral Basilica of the Immaculate Conception in Denver. The five new priests are Fathers Angel Perez-Brown, Roberto Rodríguez, and Tomislav Tomic, who all received their formation at Redemptoris Missionary Mater in Denver, and Fathers Darrick Leier and Shannon Thurman, who studied at St. John XXIII seminary in Boston. This seminary provides training to those seminarians who discover their vocation at an advanced age. Curiously, none of the new priests come from the Saint John Vianney seminary, and the average age of the five men ordained is 41 years.

Archbishop Aquila highlighted the importance of intellectual formation and indicated that it should go hand in hand with “the formation of the heart and the spiritual formation” and urged them to follow in the example of Saint John Vianney who, though lacking in great intellectual gifts, was a “humble man” and whose only wish was “the salvation of souls.” 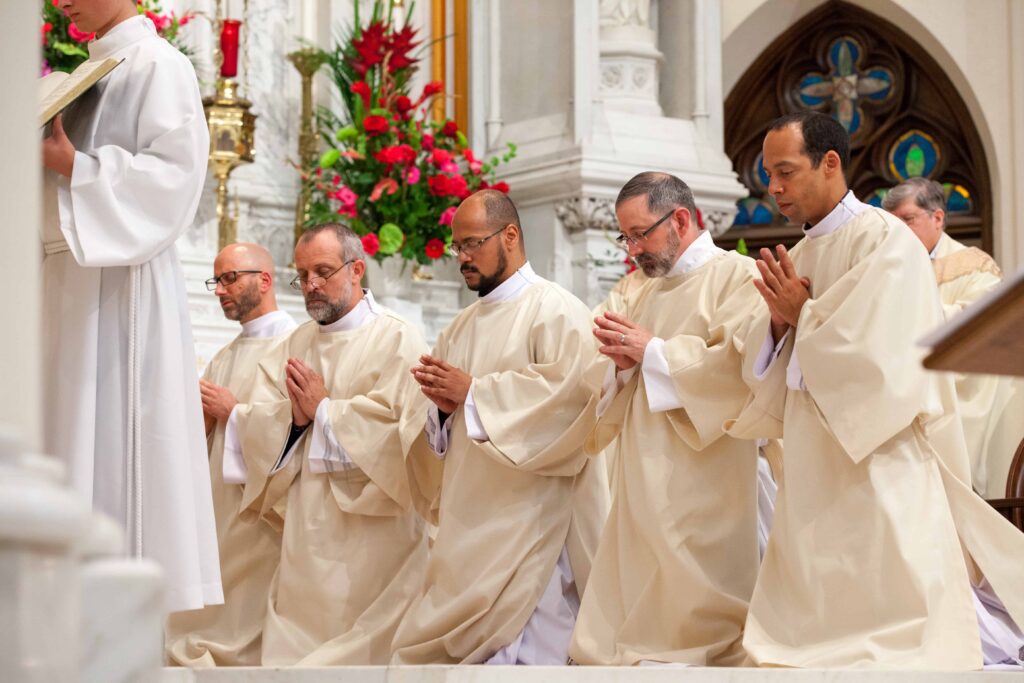 “In the heart of every priest must be the love of Jesus Christ,” he said to them.

Archbishop Aquila also exhorted them, paraphrasing Pope Francis, to “go into the peripheries of the world […] of the lives of so many who have abandoned Jesus Christ, who do not know the good news. Even among families and friends there are those in the peripheries who still don’t know Jesus Christ”.

Later, he reminded them that their ministry does not consist in announcing themselves: “we are called to serve Jesus and to serve the Church to lay down our lives as Jesus has laid down his life, and to go wherever we are called to serve Christ.” He also pointed out that the image of Jesus, the good shepherd, “must be your model and is the model for the priesthood.” 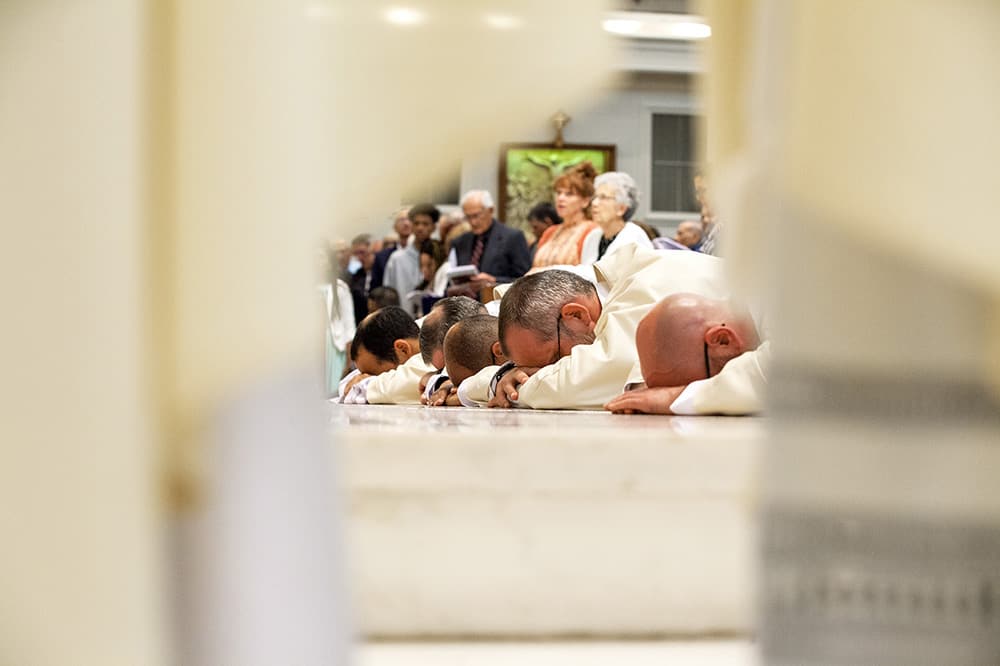 The new priests lie prostrate before the altar during their ordination ceremony on May 19. (Photo by Andrew Wright)

And as a model of love and perseverance, the archbishop invited them to look at those couples who have been married for 50 or 60 years and compared their love to “the same type of love that would enable you to feed the lambs, tend the sheep, and serve as Christ served,” he said. He told them that every time they’ll celebrate Mass “is the same sacrifice that Christ offers on the cross”, and there is where “the joy of the Gospel” is found.

Hundreds of faithful congregated in the Cathedral to witness these ordinations. The cultural diversity present was a sign of the universality of the Church. There was a large delegation from Santo Domingo and several from Bosnia and Herzegovina, as well as hundreds of local people who accompanied these five new priests. Archbishop asked from them, once again quoting Pope Francis, that they be shepherds “to smell like the sheep,” so they can “accompany them, shearing with them, going out with them and always using Jesus as your model.”

COMING UP: Meet the men becoming priests this May

On May 19, five men studying for the Archdiocese of Denver will be ordained to the priesthood. Interestingly enough, none of the men being ordained are from St. John Vianney Theological Seminary, and the average age of the five men is 41 years old.

Deacons Angel Perez-Brown, Roberto Rodríguez and Tomislav Tomic all hail from different parts of the world and have been studying for the priesthood at Redemptoris Mater Missionary Seminary. Deacons Darrick Leier and Shannon Thurman have been studying at St. John XXIII Seminary in Boston, Mass., a seminary specifically for men who discover a vocation to the priesthood later in life.

Get to know Denver’s newest priests, and pray for them as they prepare to be ordained next week. 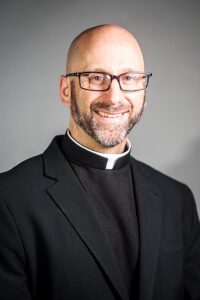 Deacon Darrick Leier is 42 years old and spent several years working in the software and civil engineering fields before discovering his vocation. After college, he became a fallen-away Catholic, but that changed 6 years ago, when his mother Marvelyn died from cancer. “Through this sorrowful and life-changing event, the Lord pierced my heart and poured out his love an mercy upon me,” he hold the Denver Catholic. The Lord led him to join Immaculate Heart of Mary Parish in Northglenn, and after a year and a half of prayerful discernment, it became evident that he was being called to the priesthood. “Jesus has set my heart on fire, and as a priest, I most want to share that fire in others I meet,” he said. “The Lord has given me this great gift, and I can’t wait to be his alter Christus!” 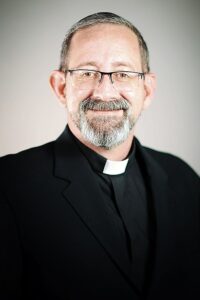 Deacon Shannon Thurman has spent most of his life in Colorado, and comes from a blended family. He was adopted by his stepfather at age 11 and had a pretty regular upbringing, he said. Throughout his life, he always felt tugs from the Lord that he was being called to the priesthood, but he largely ignored them up until 2012 when, after a period of absence from the Church, he felt the Lord calling him back and became an extraordinary minister of communion for the homebound. He finally answered the call of the Lord and entered St. John XXIII Seminary in Boston at the age of 43. When speaking about his vocation, Thurman cites St. Teresa of Calcutta’s famous line. “God draws straight with crooked lines. That would describe my journey to the priesthood,” he said. 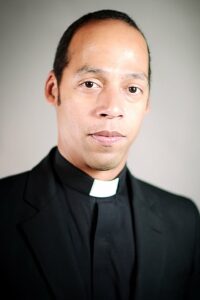 Deacon Roberto Rodriguez, originally from the Dominican Republic, has served at St. Anthony of Padua Parish in Denver for a year, and will begin his priestly service at Ascension Parish upon ordination. Although he admits being “a bit nervous” before the big date, he is mostly excited for the mission he will undertake. “It will be a time of learning, adaptation and change,” he said. “I am looking forward to see how the Lord will ask me to serve him and his people.” Some of the biggest treasures he keeps from his time at St. Anthony of Padua Parish include “growing closer to parishioners, sharing in their joys and sorrows,” walking with grieving families and mostly, “growing closer to the Eucharist,” which he awaits to celebrate after his priestly ordination. Some of his favorite saints include Saint Therese of Lisieux, St. Theresa of Calcutta and St. John of Nepomuk. 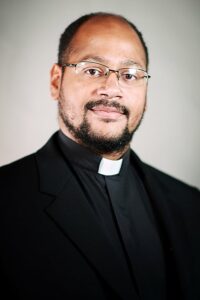 Deacon Angel Miguel Perez-Brown has served at St. John the Baptist in Johnstown and St. Nicholas in Platteville since his ordination in 2017. There he will continue his mission as parochial vicar upon priestly ordination. His pastoral work will focus on serving the immigrants who arrive to work on the fields. “I’m very excited. [There] I will find people who are thirsty, who want to encounter Christ,” he said. “They are like the people of Israel who left for Egypt, to an unknown land.” Originally from the Dominican Republic and a member of the Neocatecumenal Way, the deacon values the “warmth” of both parishes and communities, Hispanic and non-Hispanic. “I see the greatness of my vocation as something unattainable,” he said. “I went on a retreat two months ago and the Lord spoke to me clearly, saying that it is he who does all things.” 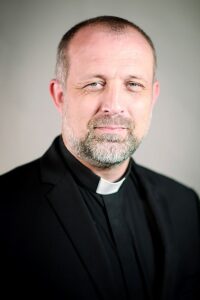 Deacon Tomislav Tomic was born and raised in a village in Bosnia. He is the youngest of nine children, and comes from a large family with several priests. Around the time he graduated high school, the Bosnian War had broken out. Four days after graduating, he enlisted in the military for a period of three years. After fulfilling his military duties, Tomic found himself feeling extremely isolated in his life. Around that time, the pastor of his parish invited him to a Neocatechumenal Way gathering. This had a profound effect on him. Tomic eventually submitted to the Lord’s call for him to the priesthood. Entering seminary was the biggest risk he’d taken in 34 years, Tomic said, and now, at 43, Deacon Tomic God has restored his human dignity and completely changed his life. “Now that I am here, I see that God transformed my life completely,” Deacon Tomic said. “God is incredible. What he doing with me is a miracle.”