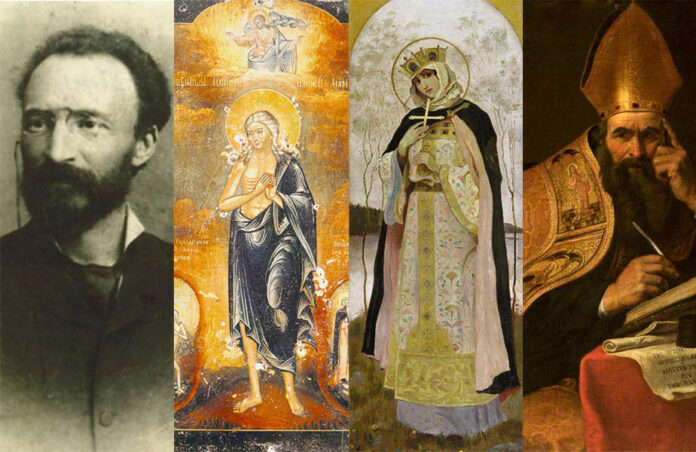 No one is ever too far gone for a change of heart — and there are several saints to prove it. From the murderers, the promiscuous, the thieves, the atheists and even a Satanic priest, conversion is always possible, as is sainthood.

Here’s a list of some of the saints who prove the saying attributed to St. Augustine, “There is no saint without a past, no sinner without a future.”

You may know that St. Monica, his mother, helped her son experience conversion through her prayers, but he really was a wild child before that happened. St. Augustine was a partier and drinker, and he had a mistress and illegitimate son, both whom he abandoned. But even after his conversion, it took him some time to embrace a renewed way of living his life — giving us another famous quote, “Lord, give me chastity but not yet.” Once he finally did change his life, however, he became a priest, bishop, a famous writer, a founder of religious and one of the greatest saints and Doctors of the Church. Olga was married to Prince Igor of Kiev, Russia. She was a cruel woman, who, after her husband’s death, brutally killed his murderers and then proceeded to hunt down and kill hundreds of their followers. But she was later baptized and converted to Christianity. Her grandson, St. Vladimir, was influenced by her faith, but he too followed suit of living a wild life —he was a murderer had many pagan wives— before embracing a Christian way of life. Because of his conversion and his rule in Kiev, much of the city also converted.

Mary left her home at the age of 12 and for about 17 years, she led a life of seeking sexual conquests. One day, a pilgrimage to Jerusalem stopped through her town and she joined them — not with the intention of making the pilgrimage, but rather for the challenge of seducing everyone aboard the ship. Once they arrived in Jerusalem on the Feast of the Exaltation of the Cross, she joined the crowds. When she reached the church door, she found herself unable to enter, restrained by some force. She realized that her lifestyle was the cause of her exclusion and she immediately repented for her way of life and begged Our Lady for her help. She entered the church and adored the cross, and she went on to live the life of a hermit. Bartolo Longo was raised a Catholic. But from the time his mother died at 10 years old, he grew so distant in his faith that by the time he studied in university, he was an atheist who began dabbling in the occult. He attended séances, experimented with drugs and orgies and eventually became a Satanic priest. But like St. Augustine, the prayers of his family aided in his conversion and with the help of a Dominican priest, he came back to the Church, fully cleansed. He fell in love with the rosary, and he founded schools and orphanages for the poor.

Honorable mentions:
St. Mary Magdelene, who had seven demons cast out of her; St. Paul, who killed Christians until Christ appeared to him in a vision, converting him; St. Moses the Ethiopian, who was the leader of a gang; and St. Olaf, who tried to convert his country by force and went into exile with a mistress and illegitimate son, abandoning his wife and daughter. All converted and became saints!