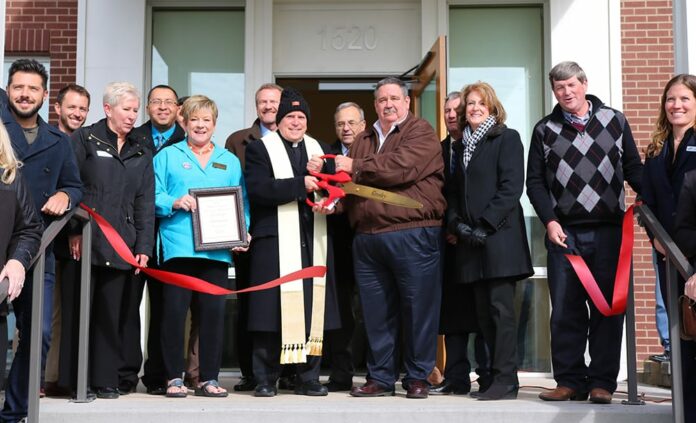 Thanks to Catholic Charities’ newly opened Guadalupe Apartments, this winter will be the first in seven that Christopher Llamas won’t be homeless.

“January 1 would have been the first day of the eighth year,” the 26-year-old told the Denver Catholic. “I lived under bridges and anywhere else I could find cover.”

Now he has a fully furnished studio apartment and supportive services to address the issues that led to his homelessness, which he said was trouble keeping a job due to cognitive disabilities suffered from shaken baby syndrome.

“I’m so grateful,” Llamas said about his recently acquired home. “To be able to stay warm in winter is awesome. … It’s a chance to get adjusted to normal life.”

Located at 1520 N. 11th Ave. in Greeley, Guadalupe Apartments aims to give low-income and homeless individuals and families a path to housing stability.

“This isn’t just an apartment building,” Justin Raddatz, executive director of Archdiocesan Housing Inc., an arm of Catholic Charities, told the Denver Catholic. “It’s a home with a coach.”

“The case managers purpose is to serve the residents and remove the barriers that are blocking them from achieving their goals—from needing medical referrals to learning Microsoft Word to get a job,” Raddatz said. “That’s what the Archdiocesan Housing team provides to all the residents free of charge.”

The apartments are subsidized through the US Department of Housing and Urban Development voucher program so residents’ rent cost is no more than 30 percent of their income, officials said.

Larry Smith, president and CEO of Catholic Charities Denver, led the celebratory ribbon-cutting, remarks by collaborators and reception, and thanked the many volunteers, partners and organizations that made the 16-month project possible, including US Bank, the Colorado Department of Housing, the city of Greeley, the Carrico Foundation, North Range Behavioral Health, and the Church of Jesus Christ of Latter-Day Saints. The project was paid for through the sales proceeds of federal low-income housing tax credits and state tax credits, officials said.

“Recently, the report from Freddie Mac about rental affordability in Colorado is not good, because it says it continues to worsen,” Smith told the crowd. “The beauty about what we’ve been able to do here by bringing together a partnership of many individual groups … is to bring about housing … that affords people who were previously homeless, dignity and respect.”

Jerry Garner, Greeley chief of police, was among the collaborators delivering remarks.

“We know, in our business, you need first a place that is safe to be before you can work on some of the other issues that may be going on in your life,” he said. “So this [facility] is helpful to all of us and not just to the people who will be living here.”

Archbishop Samuel Aquila sprinkled holy water on the main door as he blessed the facility.

“O Lord our God, “ he prayed, “…pour out your blessing on all who will live here throughout the years and upon this neighborhood community and upon this city.”

Guadalupe Apartments began leasing the units in September, Raddatz said, adding that nearly every unit is already occupied. Noting the dire need for affordable housing, he said 150 households are on a wait list.

“The income limit to qualify for a unit is 30 percent of the area median income,” he told the Denver Catholic. “This is truly for people who have nothing.”

Ashley Trujillo, 24, and her two children, ages 5 and 7, moved into a two-bedroom unit two weeks ago after being homeless for six months, during which time they stayed with family, couch-surfed, and slept in their car.

“This is a good thing and a blessing—and we’re more than thankful,” the single-parent mother said, adding that with stable housing, she can now focus on furthering her education. Her hope is to become a dental hygienist.

The apartment came beautifully furnished, Trujillo said, from the furniture and appliances down to dishes in the kitchen and towels in the bathroom. Additionally, the facility includes a computer lab, a family room, a laundry room and a fitness center.

“I love it—it’s perfect,” Trujillo said. “We went from having nothing to having all this.

“Now my kids are like, ‘Are we going home after school?’” she recalled with a smile. “And I said, ‘You know it!”