President Trump at March for Life: ‘I am truly proud to stand with you’ 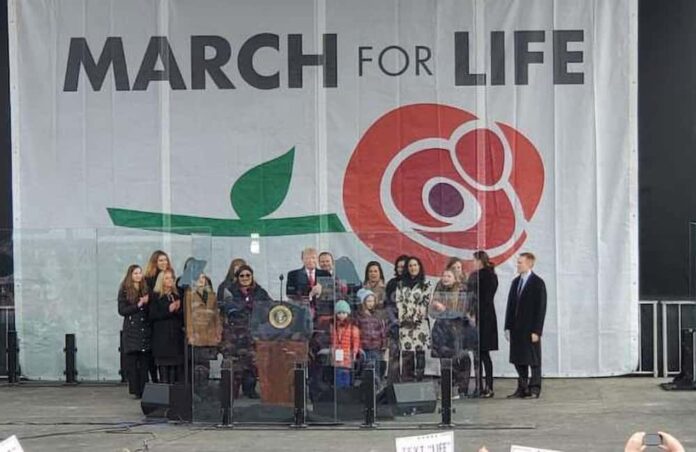 President Donald Trump addressed the annual March for Life Friday, telling pro-life demonstrators that he is an advocate for the right to life of unborn children, and calling for a federal prohibition on late-term abortion.

The president spoke about his commitment to the unborn, his administration’s record on abortion policy, while criticizing Democrats at the state and federal level for their positions on human life.

He is the first president to attend in person the March for Life, which began in 1974 and has become one of the largest annual political events in the country.

“All of us here understand an eternal truth: Every child is a precious and sacred gift from God,” Trump told the crowd, which spanned across a large section of the National Mall and which the president described as a “tremendous turnout.”

“We’re here for a very simple reason, to defend the right of every child born and unborn to fulfill their God-given potential,” the president said.

As President of the United States, I am truly proud to stand with you,” Trump said.

“Together we must protect, cherish, and defend the dignity and the sanctity of every human life.”

“You embrace mothers with care and compassion, you are powered by prayer and motivated by pure, unselfish love,” the president told the crowd.

Trump especially praised the college and high school students in attendance at the March for Life.

“Young people are the heart of the March for Life, and it’s your generation that is making America the pro-family, pro-life nation. The life movement is led by strong women, amazing faith leaders, and brave students, who carry on the legacy of pioneers before us, who fought to raise the conscience of our nation and uphold the rights of our citizens,” Trump said.

The president’s attendance at the March for Life was announced earlier this week. Last year, Vice President Mike Pence attended the march, and in 2018, Trump welcomed pro-life leaders to the White House Rose Garden on the same day as the March.

The president’s unexpected attendance at the March led to heightened security. Initial security announcements said that no strollers would be permitted at the event, leading to criticism from March attendees who had brought children to the event. Security organizers eventually relented on the stroller policy, saying the initial prohibition was the result of a miscommunication

Trump took the stage shortly after noon to chants of “four more years” from some, but not all, in the crowd. Some attendees held signs distributed by the president’s campaign team, some of which read “Most Pro-Life President Ever.”

Before he spoke, Trump greeted leaders on the stage while Lea Greenwood’s “God Bless the U.S.A played. Before he had taken the stage, songs from the Rolling Stones and Tina Turner played, as well as The Animals’ 1964 “House of the Rising Sun.”

The president’s attendance was welcomed enthusiastically by March organizers. As she introduced Trump, March for Life president Jeanne Mancini thanked the president for coming.

Describing the March for Life as a “pro-life and pro-woman” event, and the “largest human rights demonstration in the entire world,” Mancini told Trump that “your presence here today makes a very powerful statement.”

The welcome marked a stark contrast to a March 2016 statement from Mancini, who responded to remarks from Trump calling for the imprisonment of women who undergo abortions as “completely out of touch with the pro-life movement and even more with women who have chosen such a sad thing as abortion.”

“Being pro-life means wanting what is best for the mother and the baby. Women who choose abortion often do so in desperation and then deeply regret such a decision. No pro-lifer would ever want to punish a woman who has chosen abortion,” Mancini added in 2016.

But Trump has made efforts since his 2016 election to respond to the policy proposals of pro-lfe leaders, administration officials say.

On Friday, he touted some of those efforts, mentioning his expansion of the Mexico City policy that bars federal funding from supporting abortions in foreign countries, along with his 187 appointments to the federal bench, among them two justices of the Supreme Court. The president also mentioned new regulations on Title X policies that block abortion providers from some federal funds.

Trump said that his administration is concerned about protecting religious liberty, and is “taking care of doctors, teachers, nurses, and groups like the Little Sisters of the Poor.”

“Unborn children have never had a stronger defender in the WH,” the president said, to applause from the crowd.

Trump has faced fierce criticism from the U.S. bishops’ conference and other faith leaders for his immigration and social welfare policies, and did not make mention of those issues during his speech. Nor did he mention his recent drone strike against Iranian general Qasem Soleimani, which has also drawn criticism from faith leaders who have raised concerns about the possibility that the U.S. could enter another war in the Middle East.

The president also did not mention directly his reelection, but he did tell the crowd that “Democrats have embraced the most radical and extreme positions taken and seen in this country for years and decades, and you can even say, for centuries. Nearly every top Democrat in Congress now supports taxpayer-funded abortions all the way up until the moment of birth.”

Trump mentioned the 2019 passage of New York state’s Reproductive Health Act, which ushered in a wave of legislation in several states aimed at expanding legal protection for abortion. He also mentioned Virginia’s Governor Ralph Northam, who in 2019 made public comments that seemed to support allowing a child who survived a botched abortion to die without medical treatment.

The president did not mention Louisiana state Rep. Katrina Jackson, a pro-life Democrat scheduled to speak at the March for Life shortly after Trump. Jackson sponsored a Louisiana law requiring doctors performing abortions to have admitting privileges at a hospital within a 30-mile radius. That law, now under judicial review at the Supreme Court, is expected to pose a challenge to the binding precedent of Roe v. Wade.

Trump is currently subject to impeachment proceedings in the U.S. Senate, which he did not mention directly in his speech. He did, however, aim to connect his political challenges to his pro-life advocacy.

“Sadly the far left is actively working to erase our God-given rights, shut down faith-based charities, ban religious believers from the public square, and silence Americans who believe in the sanctity of life,” Trump told the crowd.

“They are coming after me, because I am fighting for you, and we are fighting for those who have no voice, and we will win, because we know how to win.”

As he closed his remarks, the president told the crowd his attendance was a “very special moment.”

“It is so great to represent you. I love you all…God bless America.”

As Trump left the stage, the Rolling Stones 1969 classic “You Can’t Always Get What You Want” played over the speakers.

Christine Rousselle contributed to this report.