Why the Bible is Catholic 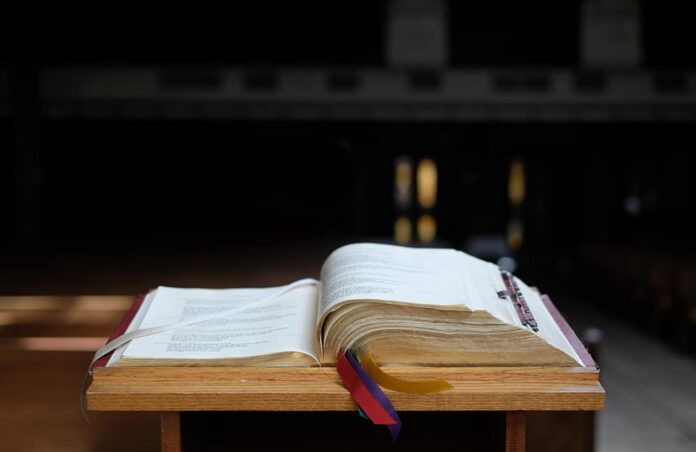 Each year, during the fourth Sunday of January, Catholics celebrate “Sunday of the Word of God,” as designated by Pope Francis. It is thus fitting to recall why Catholics should be deeply grateful for the Bible and remember why its history reflects what Catholics have believed from the first century — that the Bible is inseparable from Tradition and the Magisterium, that it is authentically Catholic.

Founding of the Church and Magisterium

Jesus intended to establish a Church — and he did. He told Peter, “You are Peter (rock), and on this rock I will build my Church” (Mt 16:18). But not only that, Jesus also promised to never abandon it. He told his apostles, “I am with you always” (Mt 28:18), and he gave them the authority to “bind” on heaven and earth (Mt 18:18) and teach what he commanded (Mt 28:20), promising to guide them “into all the truth” (Jn 16:12). That is to say, Jesus gave his apostles the authority to teach and uphold them in truth. The apostles were the first teaching authority of the Church, what we now call “Magisterium,” which comes from the Latin “magister,” meaning “teacher.”

The apostles first preached the Gospel orally, which means that the oral Tradition predated some of the books of the New Testament by decades. Later some apostles or their disciples chose to write down — under divine inspiration — the Gospel message they had preached orally and received from Jesus.

Nonetheless, God chose to give the Church not only the written Gospel, but also the spoken one. Both of these are complementary and have been passed down under the protection of the Church. St. John the Evangelist writes: “Jesus did many other signs in the presence of the disciple, which are not written in this book” (Jn 20:30). Not everything that was necessary was written in the Bible, as many Protestants suggest. The teachings that were passed on orally coincide with the Scriptures, even if they are not explained explicitly in them, and never contradict them.

First Christians and their successors

The first Christians knew that the Gospel had been passed on both by writing and oral Tradition from the apostles. St. Paul himself wrote, “Stand firm and hold to the traditions which you were taught by us, either by word of mouth or by letter” (2 Thess 2:15). This verse also carries the weight of authority, for the apostle is urging his readers to hold on to the true teachings and not be deceived by others. Another example comes from St. Peter: “You must understand this, that no prophecy of Scripture is a matter of one’s own interpretation, because no prophecy ever came by the impulse of man, but men moved by the Holy Spirit” (2 Pt 1:21). Who then has the authority to interpret if not the men whom Jesus chose to be the teaching authority, the Magisterium?

Before their death, the apostles ordained and designated bishops to oversee the communities and safeguard the Gospel that had been passed down to them. They thus became the new teaching authority, the Magisterium, by the gift of the Holy Spirit given to them by the imposition of hands.

It was not until the year 382 AD that the Church, under Pope Damasus I, confirmed the list of divinely inspired books: 27 in the New Testament and 46 in the Old, which some Church Fathers had already indicated. This list is called “Canon.” Many false writings of the time claimed to be divinely inspired, but the 27 chosen to constitute the New Testament had an apostolic origin and concurred with the Tradition that had been passed down from the apostles. Although disagreement regarding the topic was a reality among some Christians, the Church, under the inspiration of the Holy Spirit, discerned which had to be included in the Canon. We now refer to the collection of these books as “Bible,” which comes from the Greek word for “books.”

The feat of the monks The Church not only compiled the Bible, it also is the reason why we still have it. Prior to the invention of the press in the 1400s, owning a Bible was not the easiest or cheapest. Bibles had to be hand copied. Thankfully, monks from the Middle Ages saw this as a work of love. The Bible was so sacred for Christians that many monks spent hours every day, not only copying it, but also decorating it beautifully. They divided the books of the Bible into the chapters and verses we now know and helped to popularize the codex format. Thanks to these men, we still have the Scriptures. For this reason, any person who appreciates the Bible should be grateful for the great feat of the Catholic monks.

The Church reaffirmed the Canon of Scripture in 1442 and again in 1546, after the Protestant Reformation. The Protestant reformers had opinions contrary to the Tradition and Magisterium, which inspired them to reject both and follow the principle of “Scripture alone,” allowing for personal and diverse interpretations of the Bible.

The invention of the press by the Catholic Johannes Gutenberg in the 15th century made Bibles much more available — and affordable. The first book he printed was the Bible. Due to the fact that more people had access to the Bible, Martin Luther’s belief in personal interpretation of the Bible without Tradition and the Magisterium was able to grow in popularity.

The view that the Church always sought to keep people from reading the Bible was in part due to the fact that the Church censured various flawed translations that were published. Moreover, among the few Bibles that were available before the press, some were kept in churches and were chained to keep them from being stolen, but not to keep people from reading them — a practice Protestants also followed.

Those who claim that the Church always sought to keep people from reading the Scriptures also ignore the great work carried out by many Catholic missionaries to translate the Bible in order to evangelize. Saints Cyril and Methodius around 836 AD even invented an alphabet in order to translate the Bible and evangelize natives. More translations also emerged in different European languages before the Protestant Reformation. Additionally, the medieval universities used the Bibles as the primary text for teaching theology, centuries before the reformation. St. Thomas Aquinas was called “the master of the Sacred Page.”

Throughout the ages, the Church has kept the principle it utilized from the time of the apostles: Scripture, Tradition and Magisterium are inseparable. Protestants have clung to the principle of “Scripture alone,” a principle that is not found in the Bible, for the Bible speaks of Tradition and it was compiled through the authority given to the Church by Christ himself.

Christians do not need to figure out the meaning of the Bible on their own, which leads to countless conflicts, as seen in the endless number of Protestant denominations.
The Bible is a Catholic book because of its history and because of what it is. As the Catechism states, “the Christian faith is not a ‘religion of the book.’ Christianity is the religion of the ‘Word’ of God, a word which is not a written and mute word, but the Word is incarnate and living (CCC 108).

Acknowledgements: The Bible is a Catholic Book, Jimmy Akin

Did you know all of this happened before the canon of the Bible was officially declared?

50-60
St. Paul writes a letter to the Thessalonians: the first writing of what we would later call the “New Testament”

Christians visit tombs of the martyrs, express belief in the “communion of saints”

150
St. Justin describes the main parts of the Mass we keep today

180s
St. Irenaeus uses “apostolic tradition” as a strong argument, and expresses the superior authority of
the church of Rome

250
St. Cyprian speaks of “the unity of the Catholic Church”

382
The Church declares the official Canon of the Bible