His Church. Our Experience.
Subscribe
HomeOn MissionFocusPrecedent-setting Masterpiece Cake Shop case to be heard by Supreme Court
On MissionFocusSame-sex "marriage" 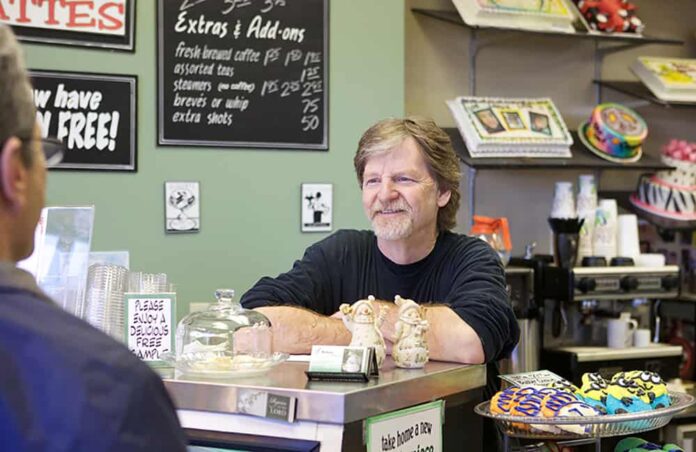 Jack Phillips answered the phone at his bakery, Masterpiece Cake Shop in Lakewood. It wasn’t a social call. The caller said he was on his way to kill Phillips.

“He said he was going to shoot me in the head,” Phillips said. “I’ve had other threats, but this sounded legitimate enough. He told me ‘I’m driving down this particular street, and I’m ready to turn down that one.’ I believed he was coming to the shop.”

The caller said he would also harm Phillips’ daughter, who worked in the store.

Police made a futile effort to trace the call, and the man never arrive.

It was one in a long series of threats made against Phillips since a Thursday in 2012, when David Mullins and Charles Craig came to his store and ordered a cake for a celebration their “marriage.” Same-sex marriage was illegal in Colorado at the time. Coloradans had voted in 2006 for a state constitutional amendment that defined marriage as a union “between one man and one woman.”

Phillips politely declined to design a cake, but offered to sell the men any other goods in the store.

“One of the men said ‘it’s for our wedding,’ so right away I knew I could not do this form them,” Phillips recalled. “I could not use the artistic talents God had given me to create an expression for a religious ceremony that violates my faith. I had nothing against these gentlemen, and they are welcome in my store anytime. It was not because they were gay. It was because of the cake they wanted me to create.”

The high-profile conflict immediately changed the course of Phillips’ life, leading to a case the Supreme Court of the United States agreed in June to hear. Oral arguments in Masterpiece Cake Shop, Ltd. V. Colorado Civil Rights Commission will likely be scheduled for December, with a ruling in the spring of 2018. The Colorado Catholic Conference plans to co-sign an amicus brief in support of Phillips.

“People need to understand how much this case could impact everybody,” said Phillips’ attorney, Jeremey Tedesco of the Alliance Defending Freedom. “If government can force Jack Phillips to act against his conscience, it can do this to anyone on any issue. It is about how much power we want the government to have over our lives, in what we express. If we give them this power over Jack, we give them power over us all.”

Phillis said Mullins and Craig stormed off after he declined their request for an expression on cake. They started an email campaign that day and the phone began to ring at Masterpiece Cake Shop.

I could not use the artistic talents God had given me to create an expression for a religious ceremony that violates my faith.”

“They were in at about 4:30 (p.m.) that Thursday. A half hour after the men left, I answered the phone,” Phillips said. “The caller asked if I had just turned away a gay couple. I said ‘no, I just turned down making a wedding cake.’ A half a dozen more hateful calls came in before we closed the store at 6 (p.m.).”

That was the beginning. The calls continued all day Friday, Saturday, into the next week and beyond for months. Most were hostile and angry; some were threatening and scary.

Soon there were protesters in the parking lot with signs. Next, the ACLU filed a complaint against Phillips with the Colorado Civil Rights Commission.

Phillips’ lawyers argued the First Amendment protected his free exercise of religion, freedom of speech and freedom of association. The Colorado Civil Rights Commission ruled Phillips in violation of Colorado’s anti-discrimination law. The commission ordered him to change the store’s policy and subject its employees to sensitivity training. The Colorado Court of Appeals upheld the ruling.

Phillips said he could not change his policy without violating his Christian beliefs, so he stopped baking wedding cakes.

“Wedding cakes comprised about 40 percent of our business, and we’ve given that up,” Phillips said. “I had 10 employees on payroll, and now I have four including me. It has cost me the opportunity to pay those people, to make wedding cakes and do what I love to do.”

In explaining the Civil Rights Commission’s decision against Phillips’ First Amendment rights, Commissioner Diann Rice said “freedom of religion and religion has been used to justify all kinds of discrimination throughout history, whether it be slavery, whether it be the Holocaust…”

“My father was a World War II veteran who won a purple heart and who helped liberate prisoners in the Buchenwald concentration camp,” Phillips said. “He wrote about the smell and the horrors of war. It is so absurd, it is crazy, for her to compare the free exercise of religion to the Holocaust.”

Wedding cakes comprised about 40 percent of our business, and we’ve given that up. I had 10 employees on payroll, and now I have four including me. It has cost me the opportunity to pay those people, to make wedding cakes and do what I love to do.”

“Basically, the commission said there was no probable cause for a finding of discrimination because the bakers would serve this customer in any other way but they were offended by the nature of his request,” Tedesco said. “Well, that is exactly what Jack has said all along. He would serve these gentlemen anytime in his shop, but there were certain things he would not do. The commission is playing favorites with First Amendment rights. If the state agrees with your views, you are treated one way. if the state dislikes your view, you treated another way.”

Phillips traces his love for designing cakes to childhood, when he embraced every form of artistic expression he could find.

He grew up as one of five children in what he describes as a functional, middle-class, Baptist home. At Alameda High School in the 1970s, Phillips immersed himself in art courses and spent his study halls in art labs working on paintings, drawings and honing his pottery skills.

After graduation in 1974, Phillips took a job across the street from his family’s home at a wholesale bakery that employed three of his siblings. Working his way up to cake design, he fell in love with the format.

“Jack is an artist who uses cake as his canvas,” Tedesco said. “He is no different than any artist who uses a brush and a regular canvas. Nobody has freedom if the government tells us what we can and cannot express on canvass.”

Working at the wholesale bakery for almost 20 years, Phillips never let go of a dream.

“I loved working in a bakery,” Phillips said. “I decided I wanted to own my own bakery. I would do cake decorating, combining the art and the baking that I loved so much.”

Phillips saved portions of his wages while providing for his wife to homeschool their three kids. He saved enough to buy commercial baking machines and to open Masterpiece Cake Shop in 1993. The store celebrated its 24th anniversary on Sept. 3.

“I love everyone who comes into my shop — gay, straight, black, white,” Phillips said. “It is crazy I find myself here now, in this circumstance. I’m not fighting this so I can get back in the wedding cake business. It is to protect all of our freedoms.”