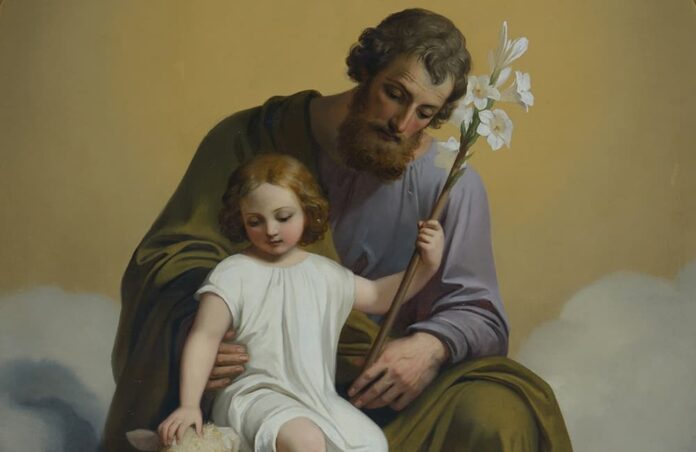 Although it possible to overlook St. Joseph in the story of salvation history due to his silence in the Gospels, he plays an essential role as the “Son of David.” Joseph is the heir to the great king and, thus, it is through his adopted fatherhood that Jesus inherited the Davidic throne. Furthermore, Joseph’s obedience to the angel initiates his guardianship over the Holy Family, which continues in his protecting role as protector of Jesus’ household, the Church. Joseph models many virtues, particularly for fathers and workers, demonstrating obedience, trust, fidelity, and strength.

Although we all have patron saints, particularly through our baptismal and confirmation names, there are some saints who play such a central role in salvation that the Church honors them universally. Our Lady is the mother of all the disciples joined to her son, as members of his Body, Sts. Peter and Paul oversaw the growth and continuity of the Church, St. Michael, originally the guardian angel of Israel, now protects the Church, and St. Joseph continues to oversee the household of the Church as her universal patron. Every Christian should develop a relationship with these saints — particularly Jesus’ close family and friends — who will, in turn, draw us into deeper friendship with Jesus.

St. Louis de Montfort (1673-1716) popularized a consecration to Jesus through Mary, recognizing that placing one’s life into the hands of Mary as mother and queen would provide a surer way of coming close to her Son. De Montfort developed a 33-day preparation period and act of consecration, renewing one’s baptismal vows, on a major feast day of Our Lady. Drawing upon this important devotional practice, Father Donald Calloway proposes a similar consecration to her spouse, St. Joseph, in his new book, Consecration to St. Joseph: The Wonders of Our Spiritual Father (Marian Press, 2020). The book leads through a 30-day preparation period through its three sections, the first of which examines Joseph’s titles in his litany, the second of which looks at the wonders related to his life and role in the Church, and the final of which offers prayers to him. Although his arrangement may be new, the book contains acts of consecration to St. Joseph written by St. Alphonsus Liguori, St. Bernadine of Siena, and St. Peter Julian Eymard.

Father Calloway explains the importance of this devotion to St. Joseph and why one should make a consecration to him: It “means that you acknowledge that he is your spiritual father, and that you want to be like him. To show it, you entrust yourself entirely to his paternal care so that he can lovingly help you acquire his virtues and become holy. Total consecration to St. Joseph means you make a formal act of filial entrustment to your spiritual father so that he can take care of your spiritual well being and lead you to God. The person who consecrates himself to St. Joseph wants to be as close to their spiritual father as possible, to the point of resembling him in virtue and holiness Saint Joseph, in turn, will give those consecrated to him loving attention, protection, and guidance” (5). For those who have already done the consecration to Jesus through Mary, Father Calloway recommends this consecration as well: “God desires that all his children be committed to the love and care of a mother and a father” (ibid.).

The next beginning date for a consecration to St. Joseph begins on Feb. 16, with 33 days leading to the Solemnity of St. Joseph on March 19. Father Calloway rightly points out that now is the time of St. Joseph. We need Joseph right now as a protector of the Church so that she may experience renewal. We also need him as a protector of purity and the sanctity of family. We need him as a guide for working and living in the world in faith and obedience. In order to strengthen our daily devotion to him, I would also propose the following prayer based on the Bible’s references to his role (including the prefigurement of the Old Testament):

Joseph, Son of David, you are the just man the Lord placed over His house. You did what the angel commanded and so we go to you in time of need.  O adopted father of Jesus, pray to your Son for us. Amen.

Jared Staudt
R. Jared Staudt, PhD, is a husband and father of six, the Associate Superintendent for Mission and Formation for the Archdiocese of Denver, a Benedictine oblate, prolific writer, and insatiable reader.
RELATED ARTICLES
Advent