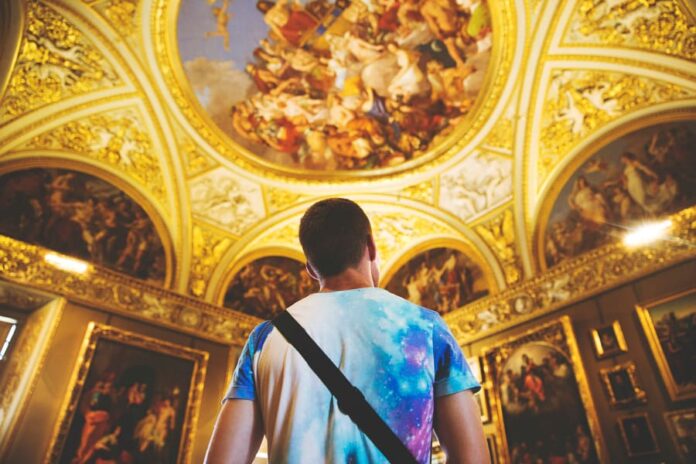 Art in the Church is not what it used to be.

But in the past, particularly during the Italian Renaissance, the Catholic Church contributed some of the greatest works of art the world has ever seen.

While the Church has lost some of its cultural influence in the arts, many Catholic artists, such as Father Peter Mussett, pastor at St. Thomas Aquinas Parish in Boulder, are asking themselves how to change that.

Father Mussett believes that one of the best ways to change this is for artists to take honing their skills seriously and simply “make stuff.”

“The solution isn’t merely just patronage,” Father Mussett said. “I just encourage [any] artist to make, and try to put myself out there in the reality of who I am. It’s really hard to make things.”

But it isn’t enough to just create for the sake of creating something — it won’t be effective without beauty. There is a distinction between art and beauty, and both need the other.

The necessity of art and beauty in the New Evangelization

Father Mussett learned from a young age the importance of art, which is skill, and beauty, which is truth, he said.

“Art is the proper way of making. It’s skill. It’s reverence to materials,” Father Mussett said. “Beauty is reverence toward God, yourself, your neighbor, creation. Beauty is truth. Beauty is meaning — even if it’s ugly, beauty still has meaning.”

Father Mussett gave the example of art without beauty, skill without truth or meaning: The summer blockbuster.

“It’s very exciting [in the senses], but where’s the spirit? Where is it speaking about the truth of human nature?” he said.

On the other hand, beauty can still deal with “ugly” things but still have a deep sense of truth and meaning — something Catholic artists should not be afraid of.

“Catholics need to stop being afraid of how grisly reality is, how their own lives are grisly — but there’s still meaning, it’s not nihilism. Everything always ends in Jesus Christ,” Father Mussett said.

Combining art and beauty is the necessary way to speak to culture in the New Evangelization, according to Anthony D’Ambrosio, co-founder of Catholic Creatives, an up-and-coming online community of Catholic artists.

Art is the proper way of making. It’s skill. It’s reverence to materials. Beauty is reverence toward God, yourself, your neighbor, creation. Beauty is truth. Beauty is meaning — even if it’s ugly, beauty still has meaning.”

“Beauty is the experience of the true,” Anthony said. “The Church is unfortunately in a place of not being able to speak the truth to culture because truth has already been dismissed. [The Church is] already dismissed because of the impression the world has of the Church.”

The solution? Change our methods of communicating.

“If we just keep batting down modernist arguments with our apologetics, like homilies and teachings that are just philosophical, we’re playing a losing game,” Anthony said. “That’s not the way God spoke to his people, it wasn’t the way Jesus spoke, and somehow we got pulled into…focusing on trying to defend ourselves rather than trying to actually give people an experience of God. And beauty is the only way to do that properly.”

Beauty, Anthony said, “reprograms us” — our experiences of sunsets, for example, are proof of that.

Catholic Creatives: One resource for artists and the Church

In order to “reach the ends of the earth” in the New Evangelization once more, there is a great need for Catholic artists who are committed to taking their craft seriously to glorify God through their talent and to effectively communicate the Gospel in new, innovative ways in a language the world can understand — and many of them exist in Catholic Creatives.

What began just two years ago with a Facebook group (which now has over 1,500 members) is becoming a resource for artists looking to be challenged and grow in their skill with other fellow creatives, and is inviting other Church members to look to the group as a resource for their projects.

It all began with twin brothers Anthony and Marcellino D’Ambrosio, who, two years ago, found themselves “complaining about the state of art, beauty and creativity in the Church.”

The brothers then hosted an event for other creatives to put their heads together to tackle one creative problem: Church bulletins.

“The value that came out of that conversation made all of us feel like we could actually do something,” Anthony said. “The Church doesn’t always have to be ugly, or cheesy or cheap. And that sense of empowerment really poured into [Catholic Creatives]. And we’re just beginning to see the real power it can have in the Church, I think.”

This year, the group held a summit in Dallas with attendees from all over the country, which propelled the group forward even more.

“It’s interesting to brainstorm with other people…what the Church could be if we had more influence in the world,” said Kate Hazen, a summit attendee and Denver graphic designer. “It made it more of a possibility rather than just [having] an image of being a creative Catholic.”

Anthony said that the theme for the summit was “New Renaissance,” how to bring the Church back into “being a leader in the arts, culture, education, science and politics in the way that it was in the Renaissance.”

“The Medicis were a giant clan in the Italian Renaissance who were behind a lot of the culture that was produced. So we see Catholic Creatives as being the connection point that gives the artist proximity to each other and also proximity to financiers,” Anthony said.

“We’re at a similar junction to where the early Church was with Rome. There was this new infrastructure of roads and commerce. Because of the Roman network, Christianity was able to spread through the entire known world. Right now, we’re looking at a new network, and it’s a digital network,” Anthony continued. “So what the early Christians did at the speed of walking, if we did in the same level of intensity, with the same speed the early Christians had, we could [evangelize] the world in 50 years.”

Catholic artists and the Church need each other

This goal of creating a “New Renaissance” doesn’t necessarily mean a sudden surge of more paintings and sculptures — although it does include finer arts.

The work of creatives in the Catholic Church is more broad and includes “new media” methods: Graphic design, creative marketing strategy, video, photography and other methods.

But in order to create in these various mediums well — with beauty — both artists and the Church have to work together.

To work toward this goal, Catholic Creatives recently rolled out an initiative on Patreon, a crowdfunding platform, where artists can support another and financiers can invest in artists.

And support, particularly in the form of money, is a crucial part of the creation of truly good art.

“The Church needs to realize these people…need to be paid a livelihood. If they’re going to be making art that’s worth being made, that’s at the standard of the rest of the world, they can’t just be volunteers doing it on the side,” Anthony said. “As long as the Church thinks those people should be giving as a volunteer, we’re going to let our artists flounder, and when we let our artists flounder, our art flounders, and when our art flounders, we’re not able to connect with the culture.”

But financing isn’t the only way to support artists, as Father Mussett said. He also encouraged parishes to promote art education both in churches and in the seminary, which is “spreading the tools of the skills, which are seeds.”

“Catholic Creatives wants to be the place that connects your resources to the artist,” Anthony said. “Connect us with people [that could finance], pray for artists, and speak to your priest.”

“Ask [your pastor] to hire someone who knows how to design well. Having those conversations can be an ally for artists and pave the way for them,” Anthony said.