His Church. Our Experience.
Subscribe
HomeLocalIs it possible to be a professional Catholic painter today?
Local

Is it possible to be a professional Catholic painter today? 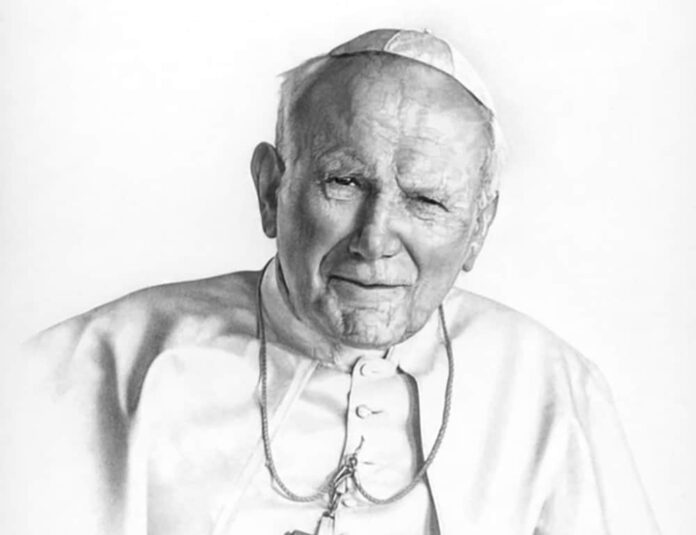 As the Archdiocese of Denver has prepared for consecration to the Immaculate Heart of Mary, one particular image of her stood out — a painting by Cameron Smith, which depicts Mary in both a traditional, yet totally modern style: Somehow impressionistic, geometric and iconographic all at once.

But it isn’t Smith’s only painting. He’s painted several other religious works, including the Sacred Heart of Jesus and beautiful sketches of St. John Paul II as well as Pope Francis. He also paints non-religious themes as well — and does all of this full-time. Not all artists need to starve.

So how does a Catholic painter become successful today? Smith shares his story on how he came to own his call as an artist, hone his craft and begin an apostolate.

Denver Catholic: How did you begin as an artist?
Cameron Smith: I was into art from childhood. I remember coloring books and kindergarten projects and was one of the class “artists” all through school. In high school, my youth minister suggested I look at North Carolina State University (NCSU) School of Design, and I went with it. While there, I gravitated towards fine arts and, in the last year of my program, started a studio co-op. I had been interested in painting, drawing, sculpture, photography and other disciplines, but somewhere in the process of developing the studio, I determined to make painting a focus. The complexity of painting and allure of color attracted me. Its possibilities seemed so vast.

DC: How did your profession as a painter take off? What motivated you to pursue it full-time?
CS: I couldn’t be invested in pursuing something unless it was deeply meaningful…and this meant defining art. I concluded that the essence of art was an “interplay with the Holy Spirit within a given medium.” Once I grasped this, it struck me as a call to pursue art. My artistic journey has mirrored my faith life in many ways. It’s an ongoing cycle of reconversion/ recommitment/ renewal.

The career aspect, however, is a puzzle I wrestled with for years and is ever-evolving. Painting haunted me as I worked various other jobs to support it. And honing my skills was just the first step in building an art career! In 1998, I received my first real fine art commission, a Degas-inspired portrait. After reading Pope John Paul II’s Letter to Artists, expressing my faith overtly in art became a real goal. I had started apprenticing with a local Catholic sculptor who introduced me to St. Louis de Montfort’s Total Consecration, which greatly influenced my life and art. That summer (99’), I discovered my wife-to-be, Kristen, on a mission trip. By 2002, we were married, expecting our first child, and preparing to be vendors at World Youth Day 2002, Toronto, where we were launching Smith Catholic Art, our family art apostolate. Five kids and 15 years later, it’s been a steadily evolving process.

DC: What was the journey of creating the Immaculate Heart of Mary and Sacred Heart of Jesus paintings like?
CS: The process of painting the Sacred and Immaculate Hearts was, to be truthful, agonizing…and momentous. I had wanted and tried to paint the Two Hearts images several times, but couldn’t find the right inspiration. Favorite icons, Van Gogh, Klimt, a few contemporary artists, as well as my experience with portraiture and Kristen as model, helped to produce this image. It was two years in the making, and it seemed like every time it went on the ease, l our life would just “hit the fan.” While I started it on my own, a dealer I work with was able to arrange a commission. This was a great grace, as it forced me to finish and push through many times of utter frustration. “Immaculate Heart of Mary” was the first painting in which I combined abstract designs and pattern with more traditional modeling and realism. It’s an idea from iconography, but I wanted to incorporate my own figure skills and use a pattern language that didn’t allude to other particular pattern contexts. It had to be contemporary but also thoroughly traditional. The “Immaculate Heart of Mary” illuminated and paved the way for the “Sacred Heart of Jesus.”

DC: What is the most challenging and rewarding thing about being a painter?
CS: Seriously pursuing art while attempting to earn a living is a tremendous challenge, like training for the Olympics without a sponsor. Adding a Catholic family to the picture, finances have without a doubt been the greatest challenge and obstacle. I am extraordinarily blessed, however, that, while I’ve certainly felt this stress, providence has managed greater artistic growth through the struggle than I could have otherwise hoped for. The most rewarding things are seeing that my work has impacted others, reaching a point in artistic growth when one knows, without question, that a work of art is good and what makes it so, and participating in creating beauty.

DC: What was your process like on the St. John Paul II sketch? How did seeing him inform the drawing?
CS: The drawing, “Portrait of a Saint” was finished in early 2001. The success of the drawing gave us the idea to take prints of it, and another, to WYD Toronto. Just a month or so before WYD, we got the opportunity to go to Rome and see the Holy Father. It was a Wednesday audience and being in the same room with him, as large as it was, was moving beyond our expectations. His love was so palpable.

It was this that inspired the drawing, felt through many of his writings, including his letter to artists. His intensity and passion, his call to discipleship and holiness were so personal. I wanted to capture that, and this image had a piercing quality. I’d spend 10 hours of the day working on a section the size of a quarter.  My wife would come home from a 12-hour nursing shift and ask, “What did you do?” I’d point, “Right here.” In retrospect it seems almost ridiculous, but that’s how you learn.

I still really like the piece. It’s how I remember JPII the Great — aged but vigorous. He is a real father figure in many ways. St. John Paul the Great, pray for us!

DC: What are you working on now and why?
CS: Making Catholic art available is what makes Smith Catholic Art an apostolate. Providing images for the Church and missionary organizations at no cost is important. The call of the Catholic artist is, in part, to renew the face of the Church. This may not be feasible with original work, but as most images are now seen in digital and print form, there is great potential. I’m currently working on a painting of Our Lady of Guadalupe with an organization which other Catholic artists should know about, The JPII Foundation for the Sacred Arts, www.sacredartnc.org. It’s purpose is to partner with artists, providing basic funding for the artist’s own projects to be realized. It’s such a vital role, as artists can only effectively market their work once it exists. The foundation is based on a crowdfunding concept, so it’s critical for others to be involved. Directed by Fr. Michael Burbeck, it’s an inspired vision for rebuilding a culture of sacred art.

Edited for length and clarity. Cover image on https://fineartamerica.com/profiles/smith-catholic-art.html/.