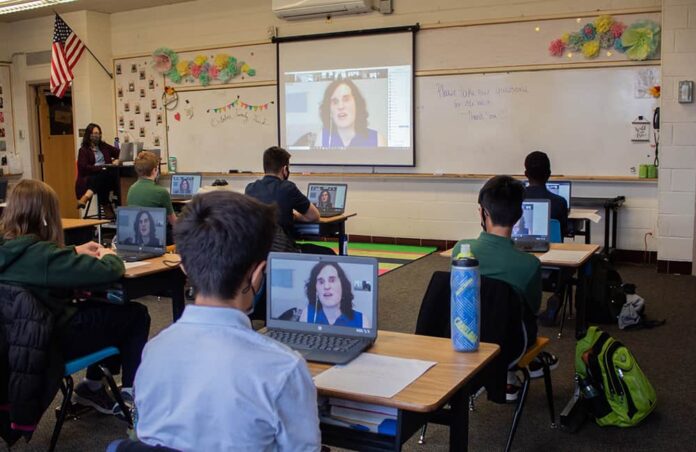 It’s not often that students have the opportunity to talk to someone making history on a national scale, but 8th grade students at Notre Dame Catholic School recently got to visit via Zoom with a woman who was part of the Supreme Court confirmation hearings for the newly-appointed Justice Amy Coney Barrett.

Appellate attorney Laura Wolk, who is a good friend of Notre Dame 8th grade teacher Abbie Carter, spent an hour visiting with the students about everything from her work as an attorney and clerk for Supreme Court Justice Clarence Thomas, to her opportunity to testify during the Supreme Court confirmation hearings on behalf of Justice Barrett. She also addressed many questions from the students about the challenges she has faced as both a blind woman and as the very first blind person to serve as a clerk for the Supreme Court.

Wolk was a student and mentee of Justice Barrett’s when she attended law school at the University of Notre Dame. She told the Notre Dame students how Justice Barrett helped her get the assistive technology she needed to compete on a level playing field with her sighted peers.

Eighth grader Vy asked Wolk who had inspired her the most of anyone she’s met. Wolk shared that it would have to be Justice Thomas. He grew up very poor and during a time when segregation was still happening, and had every reason to feel like he didn’t belong, but he instead remained joyful and faith-filled; he never let negative things get in the way of his success and instead chose to be happy and positive.

Wolk told the students how Justice Thomas believed that life can be amazing “when you allow joy and happiness to dominate your life” and that’s what she tries to do as well.

Student Nicholas asked Wolk what it felt like knowing she made a difference in history by participating in the nomination hearings. Wolk shared with the students how incredibly humbling it was for her, and how she’s received many messages from young people with disabilities or their parents about how she’s inspiring them. She says she didn’t have many role models with disabilities when she was growing up.

Oliver asked Wolk what biggest attribute it takes to be successful. “It can be tempting to give up when things are tough,” said Wolk. She urged them to keep trying and to also remember that kindness is really essential.

When Aliyah asked Wolk what advice she’d give to them as 8th graders, Wolk encouraged them to read lots of different kinds of books that introduce them to different kinds of experiences in the world and will be beneficial for their brains and vocabularies as well.

After the call was over, Carter said she was thrilled to be able to offer her students this incredible opportunity to meet her dear friend. “I’m just so excited that the world has gotten to meet her,” she said.

Student Oliver Valdez thought it was pretty cool to be able to have a conversation with her.

“I think it’s special to meet someone so influential in history. She made history so that’s a cool thing to see,” he said. Oliver was amazed by Wolk and talked about how her disability has not brought her down but only made her stronger.

The biggest thing that stood out to student Cate Busche was when Wolk talked about people with disabilities, and how they often feel like that have to try harder than others – almost be the “best of the best” to be able to compete in a sighted world.

“I’m glad she could represent others who are blind,” Busche said.

Mrs. Carter says her students have been learning about the Supreme Court and the role of a Supreme Court justice, and how having her friend participate in the nomination process was such an incredible and wonderful coincidence.

“It just all came together with what they’re learning in class with current events and was a ‘perfect storm of opportunities’ for them to be able to speak with her,” Carter said.

The students watched Wolk give her testimony in front of the committee, which helped them form the questions they each asked her during the Zoom.  That testimony helped put fellow Catholic Amy Coney Barrett on the highest court in the nation – the United States Supreme Court. It was a wonderful opportunity for the Notre Dame students and their proud teacher to be witnessing history and talking to the woman who helped make it happen.