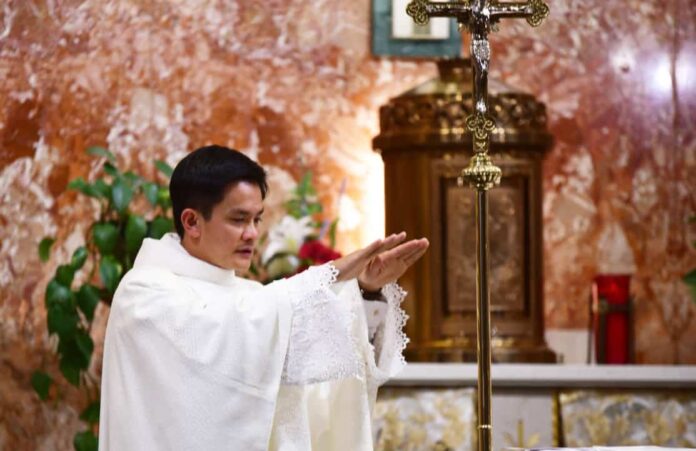 On Nov. 7, the Community of the Beatitudes made history by ordaining the first member from their community in Denver. Father John Vianney Thanh Viet Thai, originally from Vietnam, was ordained a priest by Archbishop Samuel J. Aquila at St. Catherine of Siena Catholic Parish.

Father Vianney is the first priest of the Community of Beatitudes to be ordained in Denver. Ordinations of their members usually take place France, where the community was founded in 1973, but due to the pandemic, Archbishop Aquila ordained Father Vianney is a very intimate celebration.

Father Vianney was born on March 31, 1983, in Vinh Long, South of Vietnam. He was raised in a non-Catholic family, something that didn’t stop him from following God’s call. In 2000, when he was a high school senior, he moved to student housing at a Catholic parish, thanks to a family friend who was Catholic. There, he walked into a Catholic church and experienced the sacrifice of the Holy Mass for the very first time. He immediately fell in love with the beauty of the liturgy. During his time there, he also learned about the parish charity work that was often led by the pastor of the church and the nuns from the charity congregation. Amazed by all these acts of kindness and mercy, he soon felt the desire to consecrate his life to God and serve the less fortunate. A year later, he was baptized during Easter Vigil.

In 2002, he joined the Community of the Beatitudes and lived in their New Zealand house from 2003 to 2005. Years later, he took some time to complete a degree in psychology.

In 2011, Father Vianney took his first vows with the Community of the Beatitudes and started his religious life and priesthood formation. From 2015 to 2019, he moved to Blagnac, France and continued his formation at the Catholic Institute of Toulouse. On June 29, 2019, he was ordained a deacon and two months later was assigned to the house of the Community of the Beatitudes in Denver and practiced his diaconate at Saint Catherine of Siena Parish.

“The active faith of the American youth amazed me when I first arrived in Denver,” Father Vianney said “That’s why I am so pleased and happy to be ordained here. My challenge is to give testimony to the young adults of Saint Catherine of Siena Parish where I serve.”

Along his journey, Father Vianney had important religious figures who helped him form into the priest he has become, starting with our Blessed Mother.

“I have had a deep devotion to Mary through the rosary even before I was baptized…Also Saint Catherine Labouré and Saint Therese of Lisieux,” he said. “For my priesthood ministry in the future, I entrust myself especially to my patron saint, John-Mary Vianney and to Saint John Paul II.”

As he begins his new journey, he looks forward to celebrating Mass and the sacrament of confession.

“I feel unworthy but also very excited and grateful that my desire will become true,” Father Vianney concluded. “And surely, to celebrate the Holy Sacrifice of Jesus every day and to show the mercy of God through the sacrament of Reconciliation.”